Knowing and Loving your Backyard Spiders With Halloween just behind us, some of us may still have fake spiders in our yards and cotton webbing all over the shrubbery. Spiders (along with bats) are among those creatures feared and demonized in folklore this time of year. It is important to remember, however, that both organisms are important predators and managers of our insect population.

Last week during a walk on the Extension property, I came across a large brown spider hovering protectively near her egg sac. Perched in a newly planted pine tree, I saw no obvious web. Instead, the spider loosely wrapped the pine’s needles with silk, forming a support structure for the relatively large egg sac. On further research, I learned that this female striped lynx spider (Oxyopes salticus) would have mated just once, after responding to a male’s courtship display (involving drumming and elaborate leg touches). She would have produced the egg sac 1-4 weeks after mating, attaching it to the pine needles, and will tend to it until her young emerge 20 days later. Up to five days after hatching, lynx spiderlings disperse by “ballooning” from the plant—they release a silk thread into the air, allowing the wind to carry them off like a tiny skydiver. Those spiderlings will mature into adults by 9 months, living their entire lifespan in just one year.

During that year, though, lynx spiders are important predators of pest insects. Instead of catching bugs in a web, they stalk their prey like a big cat—hence the name, “lynx.” They prey on many fly species, but also on bollworms and green stinkbugs that are major pests of cotton and soybean crops. These spiders are beneficial and highly vulnerable to insecticides. 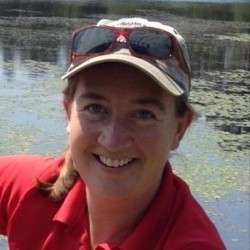