Wildlife Flourishes in Florida’s Summer! But Watch for Invaders Too! 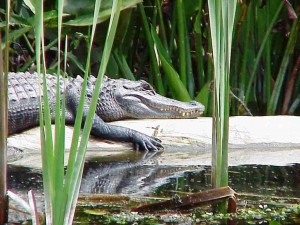 Summer is a time to bask in the sunshine for many of Florida’s wildlife species.

Each of Florida’s seasons are characterized by a variety of amazing and beautiful wildlife activities.  Below is a list of some notable native wildlife behaviors occurring in July and August around the state.

More of these “happenings” for the calendar year can be found at the University of Florida’s Wildlife Extension Website:  Wildlife Happenings.

Also at the Wildlife Extension website are a number of interesting resources to learn not only about our native wildlife, but our non-native/invasive wildlife as well.  For example: can you distinguish between the invasive Cuban treefrog and our native species?  The Cuban treefrog is well established in central and south Florida and has been documented in Bay and Leon Counties in north Florida.  Be on the lookout for this alien treefrog! 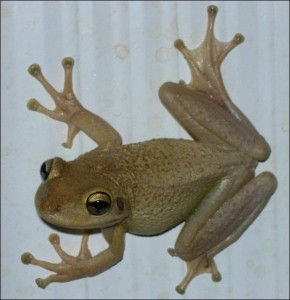 Natural habitats invaded by Cuban Treefrogs include pine forests, hardwood hammocks, and swamps. In urban and suburban settings they are most commonly found on and around homes and buildings, and in gardens and landscape plants – Image by Dr. Steve A Johnson 2005.

On the flip side, did you know that our “own” American Bullfrog is invasive in other countries throughout the world?  Also, current research is investigating the observations that mating calls of some non-native frogs may interfere with the dynamics of native frogs’ calling behavior.  These and other up-to-date facts can be found in the UF/IFAS Invader Updater newsletter.  The current issue has articles on the suckermouth catfish, Cuban treefrog, lampreys, and the recent record-sized python caught in south Florida.

Focusing back to our own unique native wildlife, you may find, as I did, this UF website of Frogs & Toads of Florida of interest to you.  It has beautiful pictures of each species as well as an audio recording of its distinctive call.  So, turn up the volume on your speakers and listen to a sampling of the chorus that serenades Floridians each night. Click Here to listen to the call of the Squirrel Treefrog.