It seems like there has always been a soft spot in my heart for snakes. From a young age, I was fascinated with all reptiles. The rural fabric of where I grew up in Central Florida (think late-1960s) afforded many opportunities for us kids to roam the woods and fields in search of adventure during summer vacation. I vividly remember the occasional eastern hognose snake that we would catch as kids. They were easy to house for a while, as there was no shortage of toads for a food source. This article will focus on some of the common species of snakes in NW Florida and a couple of snake safety tips.

Very likely, one of the first species of snakes most people encounter in North Florida is the gray rat snake (aka oak snake). If you raise chickens, you can greatly reduce the time it takes to enjoy your first encounter. I pull oak snakes out of our nest boxes on a regular basis. I have also encountered some rather large pine snakes in this manner; one with eight egg lumps in its mid-section. These are both harmless, beautiful creatures that can unfortunately make you hurt yourself in a dimly lit coop as you reach in to collect eggs. Another commonly encountered snake in our area is the corn snake, also called a red rat snake. The orange background and dark-red blotches make this one of our most beautiful species. Southern black racers are also a commonly seen species due to their daytime hunting habits. Racers are black on the back with a white chin and very slender for their length. They live up to their name and can disappear in a flash when startled. Two other species regularly encountered here are in the “garter snake” group. The eastern garter snake is one of very few species in our area with longitudinal stripes. They can have a tan to yellowish background color or even a greenish or blue color. The closely related ribbon snake looks similar in color and pattern but has a much slimmer build. 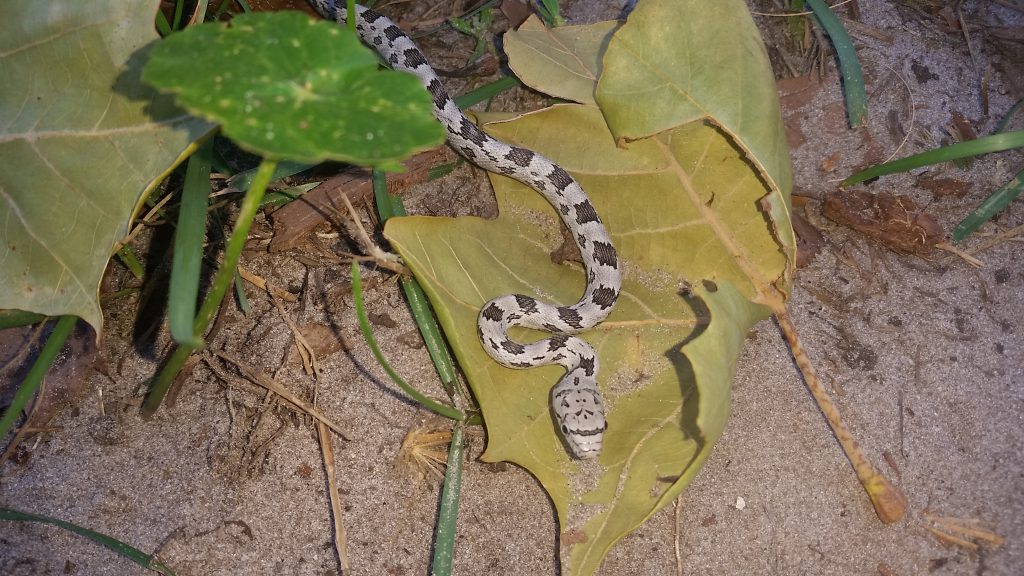 My home county of Wakulla is home to four species of venomous snakes, which include the eastern diamondback rattlesnake, pygmy rattlesnake, coral snake and Florida cottonmouth. However, if you live in other parts of North Florida, you may have five or possibly even six species that are venomous. The copperhead’s range extends into North Florida in a few Counties along the Apalachicola River and the canebrake (or timber) rattlesnake ranges slightly farther south in the peninsula to North-Central Florida. I’ve only seen one canebrake rattlesnake and it was crossing a road on the north side of Gainesville many years ago. Both pygmy rattlers and cottonmouths can be very abundant locally in the right habitats but diamondbacks and coral snakes are less common these days having lost much of their preferred habitats to development.

My best advice for those worried about being bitten by a snake is don’t try to pick one up, and watch where you put your hands and feet. It really is relatively easy to avoid (key word here is avoid) being bitten by a snake. There are many good medical sites on the web with detailed recommendations for snakebite treatment. In the very rare circumstance when someone is envenomated, the best policy is to remain as calm as possible and head for medical attention. Do not cut the skin and try to suck out the venom or apply a tourniquet. These strategies generally cause more harm than good.

I always appreciate the chance to get a look at one of our incredible native snakes when afield, especially if it happens to be one of our venomous species. A big diamondback rattlesnake is an impressive animal to happen on when afield. This appreciation does not mean that I don’t get startled occasionally when surprised, but once that instinctive reaction passes, I can truly appreciate the beauty of these scaly critters.