May 2022 Weather Summary and Summer Outlook 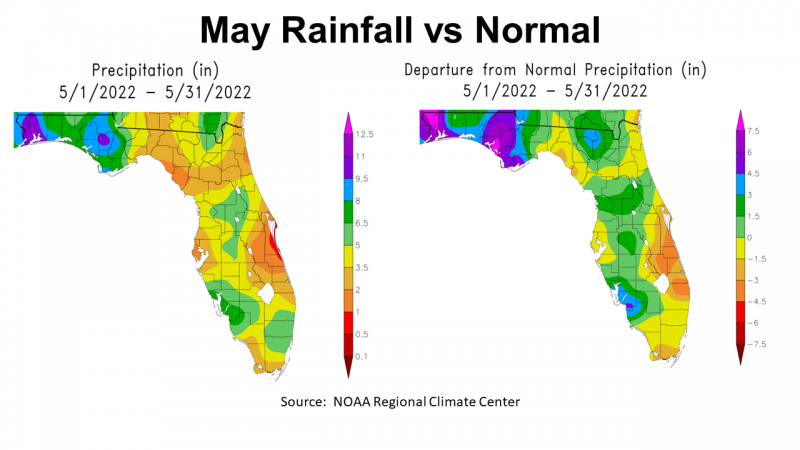 May is normally one of the driest months of the year, with an average of 3.5″ of rain in Marianna.  May 2022 was definitely not normal or uniform across the Florida Panhandle, with much of the rain coming in the final full week.  The map above to the left shows the NOAA estimated rainfall totals by region.  Calhoun, Santa Rosa and Escambia Counties received abundant rainfall with totals over 9.5″ (purple).  Yet the Eastern Panhandle had much lower totals 3.5-5″ (yellow) and 2-3.5″ (tan).  The map to the right shares the real story when these totals were compared to historic averages for the month of May.  Portions of Jefferson and Wakulla counties were below average (yellow), while the rest of the Panhandle was above (green and blue) or well above average (purple and fuchsia) for the month. 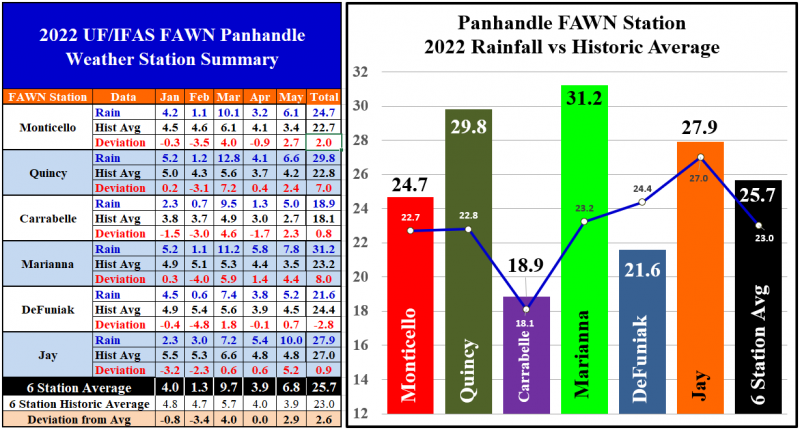 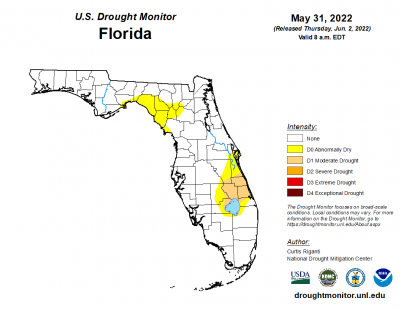 The six Florida Automated Weather Network (FAWN) stations show the variation in rainfall across the region.  The FAWN station at Jay recorded 10″, which was more than 5″ above normal.  The Marianna station was not far behind with 7.8″, 4.4″ above historic average.  Compare those totals with the station at Carrabelle with only 5″ and DeFuniak with 5.2″.  The average for all six stations in May was 6.8″, which was 2.9″ above normal.  The good news is that there are only two areas in Florida that were still listed in the Drought Monitor as in drought or abnormally dry, at the end of May.

Through the first five months of 2022, the highest total of 31.2″ has been recorded in Marianna, which was 8″ above historic average.  The chart below shows how the monthly totals compared to average, so there were real swings from dry in February to excess in March and May.  The stations at Quincy (29.8″) and Jay (27.9″) were not that far behind.  Contrast those totals with Carrabelle with 18.9″, and DeFuniak with 21.6″ for the year thus far.  The average for all six stations was 25.7″ through May, which is 2.6″ above normal. 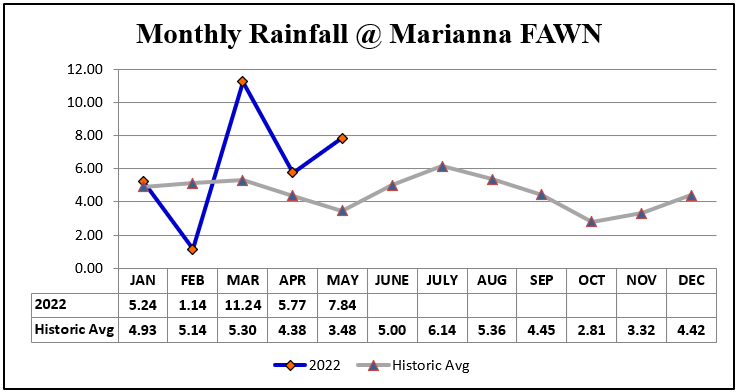 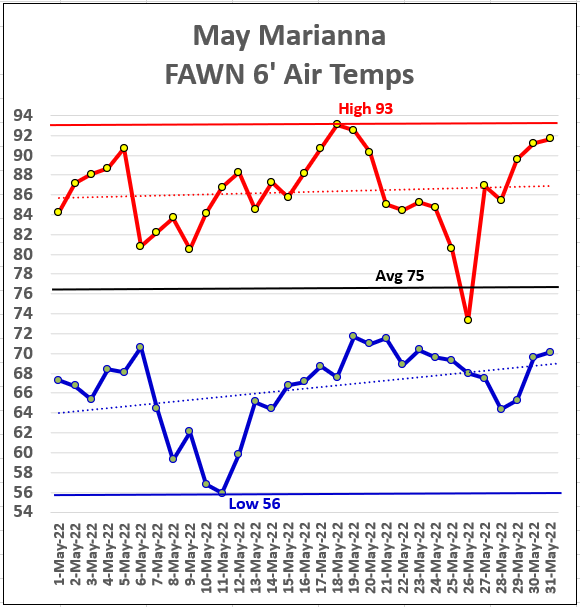 Not only were there wide swings from dry to wet in May but temperatures went from cooler than normal to more normal at the middle of the month.  They high in May was 93° on May 18 and 19, with a low of 56° on the morning of May 11, which was a 37° swing.  You can also see how the rainy days cooled things off before warming quickly afterwards.

The average air temperature rose 8° from 67° in April to 75° in May.  Soils warmed from an average of 71° in April to 80° in May.  There still have not been any 95° days, so crops that were not flooded should be growing well at this point.  One of those storm sells had winds that peaked at 38.3 mph. 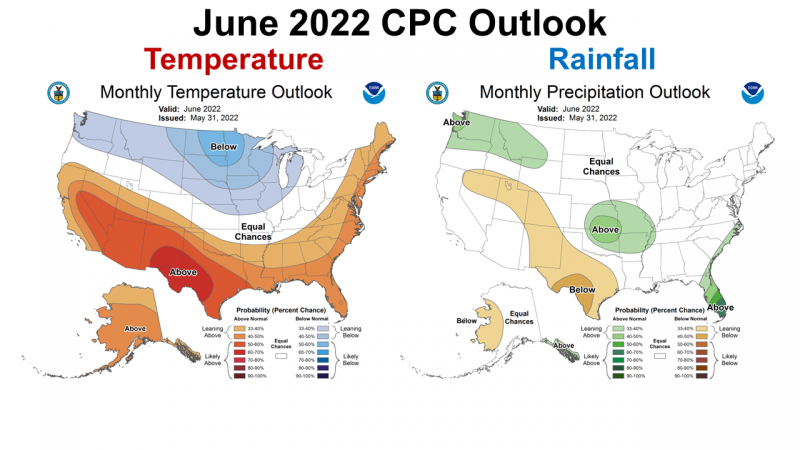 The Climate Prediction Center (CPC) recently updated their outlook for June.  They expect a hot month ahead.  While the CPC expects much of Peninsular Florida to have above average rainfall, they make no Prediction in the Panhandle.  June historically is when temperatures climb well into the 90s and even triple digits on occasion.  It also typically when summer rains off the Gulf start developing regularly.  This forecast does not really give much to go on, but no real bad news here either. 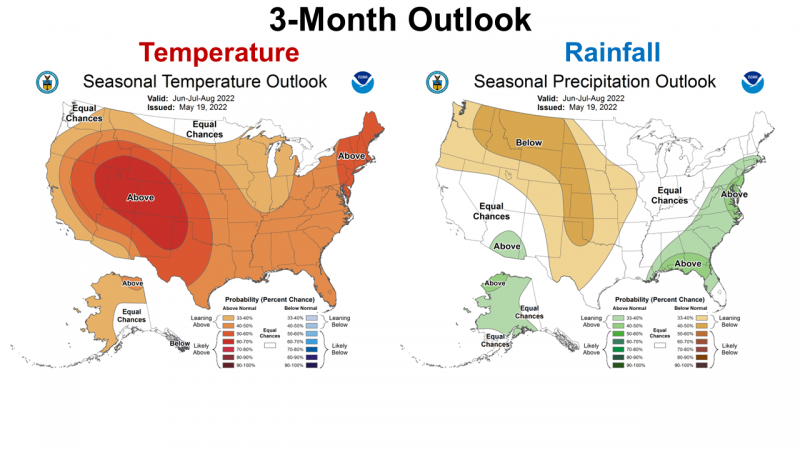 The longer range, three month outlook shows fairly high chance of above average temperature and rainfall is expected this summer.  It does not appear the concern over a La Niña influenced drought will be an issue this summer.

No real changes on the La Niña outlook since the last report.  Summer is not the best time to gauge the coming ENSO phase.  Forecasters are still leaning toward a third cool-season La Niña in a row.  But the 61% forecast tells me they are still not certain.

What does this mean for Farmers and Ranchers?

Rain at the end of May has many areas wet again, and it appears that June should be fairly normal, although perhaps warmer than average.  It does appear that this summer will stay on the wetter side, so at this point I think Florida the Panhandle is fairly safe from drought that normally is an issue at this point in the growing season.  The only real concern is that La Niña creates an active tropical storm season.  Unfortunately that has become a regular issue the last few years in the Gulf.  Based on this forecast I would advise hay growers to try very hard to get a good cutting in June.  With high fertilizer and a possible wet summer in July and August, this may be the best time to make quality hay. I would say these extended forecasts signal that peanut growers will need to stay current on fungicide sprays.   At this point, the weather forecast is fairly positive for our warm season crops.  Stay tuned for a more accurate ENSO forecast later in the summer for planning cool-season crops.