Ticks: A Health Risk for Livestock and their Owners Historical photo of ranchers spraying cattle for ticks in Florida. Photos from the Smathers Archives. The bacteria that cause Lyme disease is transmitted by the black-legged tick, Ixodes scapularis. Credit:  James M. Newman, UF/IFAS FMEL

Most people can probably tell you that ticks carry Lyme disease. This bacterial disease can cause long-term health problems for humans if left untreated, but it is thankfully relatively rare to find in Florida (132 confirmed cases in 2016). Though Lyme disease may be the best known tick-borne disease, there are others, such as Ehrlichia and Anaplasma, that are potentially harmful to both humans and animals, including livestock.

Ticks are not insects. They are arachnids, closely related to spiders, but with the bad habit of feeding on blood. Humans are not the preferred source of blood for ticks, but most species are perfectly happy settling for human blood. Of the ticks found in our area, the brown dog tick and American dog tick cause the most trouble. That being said, you might also find other species such as the Gulf Coast tick or lone star tick, but these are less likely to be problematic.

The cattle tick may be of interest to livestock owners, as it may transmit disease to not only cattle but also horses, sheep, and goats. Introduced to the United States along with the cattle that accompanied early explorers, this tick was originally native to the Mediterranean region and the Near East. It stays on one host, feeding for 18-20 days before females drop off to lay their eggs. They may produce up to four generations every year, meaning that a small population, once established, has the potential to grow very large very quickly. This makes them dangerous, coupled with the fact that they can carry diseases such as anaplasmosis, caused by the bacteria Anaplasma marginale, and Texas cattle fever, caused by the haemoprotozoan parasites Babesia bigmina and Babesia bovis.

Texas cattle fever devastated herds in the late 1800s, spread by the cattle tick. Eradication programs in place since 1906 have limited this species of tick to a few counties in south Texas, but the danger exists that deer or other wildlife could carry these pests to other areas. Part of what helps keep this danger to a minimum are ongoing eradication and surveillance efforts, including surveillance by the Florida Department of Agriculture and Consumer Services (FDACS). You can help these efforts, whether or not you own livestock, by turning ticks you find in for testing to FDACS. Their Division of Animal Industry can be reached at (850) 573-0299.

To help control ticks of any sort, try maintaining the landscape to deter them. Keep wildlife out with fences or deterrents, and ensure the edge of lawns, fields, and pastures are free of leaf litter and debris. Keep lawns mowed and don’t let pets out into the woods where they can pick up ticks to bring home. Use insecticides if needed; repellents may work for personal use. Livestock may be treated with pyrethroid sprays or wipe-on products. Ticks may attach to any part of an animal, but in livestock tend to prefer the tail, head, neck, chest, and belly, particularly near the legs. Heavy infestations may require an application of insecticides to the area, indoors or out, to reduce major infestations. Ehrlichia and Anaplasma in Florida 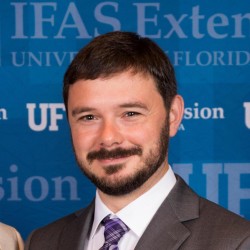