Ty’s Story: How a Lesson in ATV Safety Changed our Lives 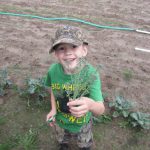 Though it’s been a few years, Ty still vividly recalls his accident. Thankfully he is still around to enjoy 4-H projects like gardening, cooking, and embryology.

Anyone who deals with youth knows that we must constantly assess risks and decide how to handle them. The risks we encounter can be assumed, reduced, transferred, or avoided. My husband and I decided early on that we would be altogether avoiding the risks associated with ATV’s when it came to our personal children.

However, in the spring after Ty, our son, turned 2 we learned that my in-laws were taking him on ATV rides not only in their yard and in the woods, but on paved public roads and across major highways to visit friends. We repeatedly asked them to stop, but Ty was hooked, and they found it difficult to tell him no. In fact, on the day of Ty’s final four wheeler ride, my brother-in-law showed up at our house on his ATV to take Ty home with him. I told him to ride home and I’d bring Ty shortly. I waited until I thought he would be safely home and off the roads. After all, it would have been tragically ironic if I had been the one to run over him.

When I took Ty over I made it very clear that my husband and I did not want Ty on a four wheeler at all, and that he certainly should not be on the highway. I explained that we had both had friends die in serious ATV accidents when we were younger, and we weren’t willing to assume the risks with our own children. It just didn’t seem worth it to us. Besides, Ty had no gear, the ATVs weren’t made for two passengers, and I knew it was against the law to ride on highways. It all seemed very rational to me, and I thought it was settled.  I was wrong.

Later that day when my husband answered the phone and then without another word stood up from the table and began walking toward the door, I knew something was wrong with Ty. I was changing our newborn daughter’s clothes after her lunch. I remember grabbing her, picking up a pair of shoes from beside the door for myself, and climbing in the truck with my husband who was still on the cordless phone as we pulled out of the drive. Needless to say it cut him off pretty quickly, and all he could say was, “Blayne said Daddy and Ty flipped the four wheeler on the highway, and Ty’s not breathing.” When we pulled in the drive my father-in-law rushed into the yard with Ty in his arms. Ty’s eyes were open, and he was breathing now. But he was having a hard time, and I could tell he was in shock, so we headed to the ER.

X-rays, CT scans, lots of drawn blood, one serious scare that nearly resulted in an ambulance ride to a larger hospital, and seemingly countless hours later, they let us go home with him. He seemed fine, but we had to follow up the next day, and of course, stay up with him during the night in case of a concussion. The whole ordeal was nerve wracking. But the worst part of all was watching my husband hold Ty during the night and repeatedly ask, “What if we had lost him? What would we have done?” Clearly he wasn’t worried about the potential for missed time from work or funeral expenses. He was talking about losing his son – living a life without him in it. It was a moment of shocking clarity when we realized that we loved him more than we even knew. It would have been hard to have lost him that day.

Ty miraculously survived his accident with little more than a bruised chest and abdomen and a story to tell.  I never said anything to my father-in-law. I didn’t have to. Watching him recount the story to the police investigator, the doctors, and other friends and family who quickly gathered with us in the hospital was punishment enough for both of us. He knew it could have been worse. I didn’t have to say it.

For those of you who are curious, a friend had called and asked my father-in-law to come over to help with something. Ty wanted to take the four wheeler, and my father-in-law caved. Ty was riding in front of my father-in-law on the ATV. As they were headed up a steep hill along the way, a large rattle snake was stretched across the road. My father-in-law didn’t want to drive over it with Ty on the ATV with him, and he didn’t want to leave it alive either, so he decided turn around and take Ty home so he could get a gun and come back to kill the snake. With the wheel cut at a sharp angle, and as he was shifting to reverse, Ty reached up and mashed the gas hard. The ATV careened out of control throwing them both and landing on Ty bending the handle bars in his chest. Thankfully, Ty landed in the grass on the shoulder of the road instead of on the pavement preventing further serious injury, and neither of them landed on the snake. (In the chaos, the snake got away. I know someone is asking that right now.) The ATV sat where they left it for weeks before someone moved it. It was more than a year before my father-in-law even had it fixed. It was a sickening reminder of a tough, and unnecessary lesson in ATV safety.

Not everyone wants to avoid ATVs altogether though. And I totally understand why. They’re fun. And when used properly, a lot of the risk associated with them can be reduced or avoided. That’s why 4-H has partnered with the ATV safety institute to bring ATV safety classes to youth and families across the nation.

During these courses, youth learn the golden rules which address the leading causes of serious injury and death in ATV-related accidents. Can you pick out the ones broken in Ty’s story? (Hint: There are only two not broken that day! Answer: 1,2,4,5,7,8.)

Remember, riding ATV’s is fun. ER visits are not.

4-H offers curriculum, training (face to face and online) and even an ATV Safety App, Treadsylvania, to learn about ATV safety.  For more information on ATV safety or 4-H in general , contact your local  UF IFAS Extension office.  If you have a passion for ATV safety, consider becoming a certified ATV instructor with 4-H.  Learn more at http://florida4h.org/volunteers.

On behalf of 4-H agents across the Florida panhandle, I wish you a fun and safe summer!