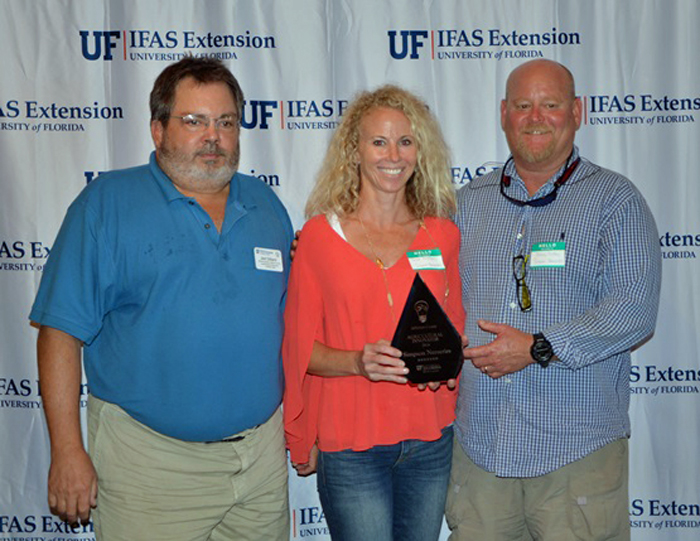 Simpson Nurseries was honored as the Northwest Florida Agricultural Innovators of the Year.  Jed Dillard, (left) presented the award to Renee Beshears and Johny Dicky, who accepted on behalf of Simpson’s Nurseries.

All of the county honorees have distinguished themselves as creative thinkers and leaders in the agricultural community.  From this group of elite farmers that were honored by their home county, one is selected annually to represent Northwest Florida. This year Simpson Nurseries of Jefferson County, was selected as the Northwest Florida Agriculture Innovators of the Year.  The Beshears Family were nominated by Jed Dillard, Jefferson County Extension Agent.  Read more about the Beshears Family and their farm below.  The 11 other Agricultural Innovators nominated this year will be featured on the Panhandle Ag e-News over the coming weeks. 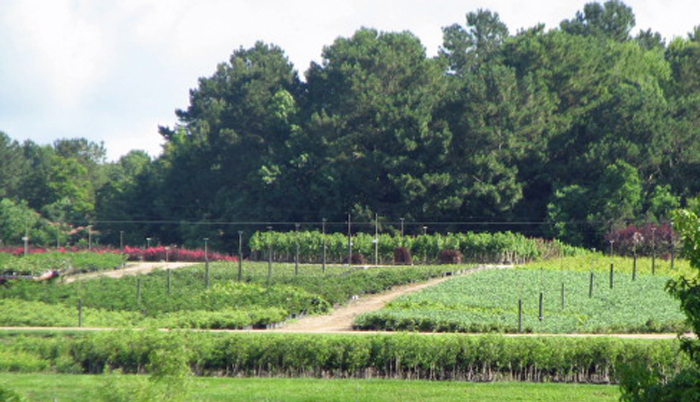 Simpson Nurseries has deep roots in Monticello.  Established in 1902 as a watermelon seed and pecan grower, the company’s name is the same and it still is a major producer of pecan trees. A lot, including ownership, has changed in 112 years. In 1975, the company was bought out of bankruptcy by a group of investors including Fred Beshears. By 1995 Fred Beshears and sons, Rob, Halsey, and Thad, were sole owners of the deciduous nursery. The wholesale company operates on more than 1600 acres, and grows over a million plants a year in containers. The company’s market includes nurseries and home improvement stores in the Southeast and Mid-Atlantic regions.

The nursery business has had anything but smooth sailing over the last twenty years. While the Florida Nursery, Growers and Landscape Association (FNGLA) has lost over half its membership since 2008, “Simpson’s” (as it’s commonly referred to in the county), has continued to grow sales by adopting new production techniques and marketing strategies. The company recently purchased an adjacent defunct factory to be able to load up to ten semi-loads of plant carts per day. Plants are loaded on rolling racks and rolled off at the retail store directly into the display areas. Once emptied, company trucks pick up the empty racks on the next trip to restock the store. 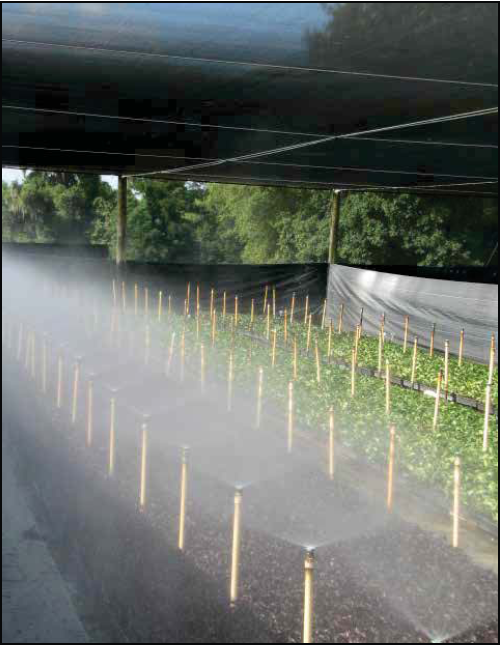 Over a million plants a year begin as cuttings in the mist beds at Simpson Nurseries.

“It”s one of the things we have to do to remain competitive. We can provide value to our customers and save them money. That leaves them a little more for us,’ Beshears said with a grin. “We’ve grown and thrived because we watch for new ideas and develop good people,”  said Fred. “We’ll go almost anywhere to learn new ideas.  We sent a new manager to New Zealand to learn about new opportunities. I’ve never been to New Zealand,” he emphasized. “New techniques don’t always work exactly
here the way they do somewhere else, so we figure out how to adapt them if we can. Our business is so volatile and competitive. We have to.  They may “have to”, but it doesn’t take long for a visitor to realize they also “like to”.

The company has moved from growing trees in the ground off site, to container grown trees on site, changed its pecan propagation procedures to increase the efficiency of land use and is continuing to develop its online marketing. However, the nursery’s signature innovation is its adoption of water conservation measures.

“That’s water we don’t have to pump from the aquifer.  Every bit of runoff from our irrigation runs back into a surface pond over grass waterways. That water is treated and recycled through our irrigation systems. Pumping water from the surface is cheaper than from three hundred fifty feet below ground. We save energy, and the city has a better place to put its waste water. We’ve largely moved from overhead watering to remotely controlled drip irrigation, so we’ve also reduced losses to evaporation.”

The nursery is a longtime supporter of IFAS activities in the county. The soybean rust sentinel plot is on nursery land. Research trials in entomology, variety adoption and irrigation technology from both the NFREC and main campus have been held on site, and the nursery is cooperating with IFAS and FDACS to refine Best Management Practice recommendations.

The nursery has sponsored IFAS research efforts with direct grants as well. “This helps us and helps IFAS,”Fred says. We have an ongoing connection with leading edge research and our University is able to do replicated research on a commercial scale operation.”

The company is a long term supporter of IFAS pecan research. The company supports the annual Pecan Field Day and hosted the 2013 Field Day tour. Rob serves on the Jefferson County Extension Ag and Natural resources advisory board and is an ongoing supplier of plant material for Extension.

Fred, Rob and Thad Beshears with Jeb standing in for his Uncle Halsey.

The nursery freely shows its innovations and tells its story to tour groups including Water Management District groups, Farm Bureau Leadership groups and other thought leaders from around the state and country.

The company is a long term supporter of the Florida Pecan Growers’ Association. Fred is a past president and has also been active in the Southeastern and National Associations.

Halsey has served as president of the Big Bend Chapter of FNGLA and the state association. Both Halsey and Thad participated in the Wedgeworth Leadership Institute, and Halsey served on its board. In 2012, Halsey was elected to the Florida House of Representatives and is currently a member of the House Agriculture and Natural Resources Sub-committee and the House Agriculture & Natural Resources Appropriations Subcommittee.

As Fred put it, “Agriculture hasn’t done as good a job of telling our story as we need to. Water is critical to Florida agriculture. If we don’t get our story across, we’ll lose access to the water we need. Agriculture is doing good things. We need to tell our story and take care of our resources.”  Simpson Nurseries is doing just that. Jefferson County is proud to present the Beshears Family as 2014 Agricultural Innovators of the Year for Northwest Florida.

The University of Florida/IFAS Northwest Extension District and Farm Credit of Northwest Florida are proud partners of the annual  Agricultural Innovator Recognition Program.