Friday Funny: Putting the Cat Out 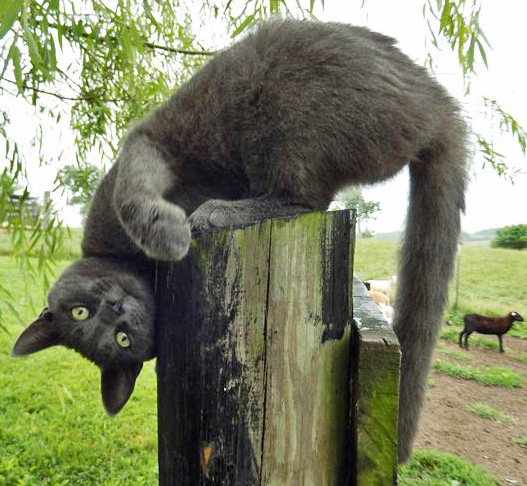 A farmer and his wife were invited to a New Year’s Eve Party in town.  Knowing alcohol would be served, they phoned the local cab company and reserved a taxi.

The night of the party they showered and got all gussied up, and were ready to go out for the night. They turned on a night light, turned the answering machine on, covered their pet parakeet, and put the cat outside. The taxi arrived and they opened the front door to leave the house. As they walked out the door, the cat scooted back into the house. They didn’t want to leave the cat in the house, because when left alone she always tried to eat the bird.

The wife went on out to the taxi, while the farmer went back inside to get the cat. The cat ran upstairs, with the farmer in hot pursuit. Waiting in the cab, the wife didn’t want the driver to know that the house would be empty for the night, so she explained to the taxi driver that her husband would be out soon, “He’s just going upstairs to say Goodbye to his mother.”

A few minutes later, the farmer got into the cab. “Sorry I took so long,” he said as they drove away, “That stupid winch was hiding under the bed. I had to poke her butt with a coat hanger to get her to come out!  She tried to take off, so I grabbed her by the neck. Then, I had to wrap her in a blanket to keep her from scratching me. But it worked! I hauled her fat butt downstairs and threw her into the backyard!”

The cab driver overheard the farmer’s story.  His emotions got the better of him, he lost control of the car, and plunged into the ditch full of water on the side of the road. After a lengthy explanation to the responding Sheriff’s Deputy, a humiliating, and sopping wet ride home in the squad car, and yet another shower, the farmer and his wife rung in the new year in pajamas in their living room, but that cat spent the night in the barn.

Moral of the Story:  Sometimes you’re just better off telling the truth, even when it’s ugly.

One thing is for sure, farm folks always enjoy sharing good jokes, photos and stories.  If you have a good, clean joke, particularly one that pertains to agriculture, or a funny photo that you took on the farm, send it in and we will share it with our readers: