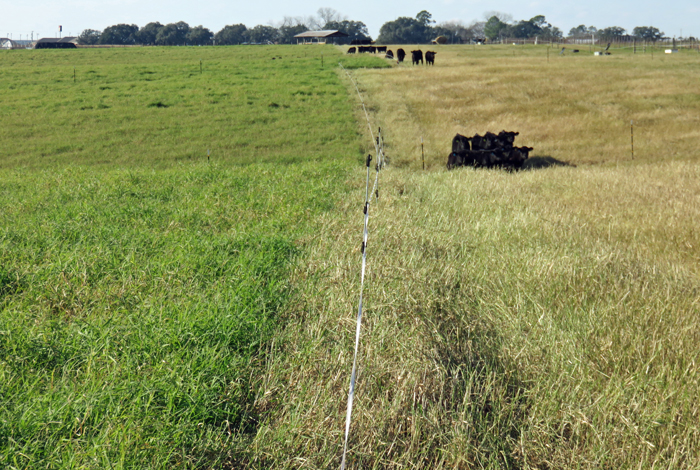 Researchers at Auburn University have conducted research trials feeding cow-calf pairs and stocker calves on stockpiled Tifton 85 Bermudagrass at the Wiregrass Research and Education Center in Headland, Alabama.  This photo was taken on December 9, 2015 before the temporary electric fenced was moved over to allow access to fresh grazing.  Notice that the heifers are mainly grazing on the tender, high quality leaves and leaving the course stems that are much higher in fiber.  Photo credit:  Doug Mayo

Winter feeding is one of the largest expenses for ranchers, and hay production and feeding is one of the major labor requirements in the annual management of a cattle operation. Researchers across the country have long searched for ways to extend the grazing season to reduce the “forage gap,” so that less hay is required each winter.  Gary Lacefield, Emeritus Kentucky Forage Extension Specialist, has a great tag line when he talks to ranchers, “Every day grazed is money saved!”  Much of the research focus in the Southeast has been on identifying cool season forage varieties that can fill the gap over the winter before warm-season permanent pastures emerge again in the spring.  A relatively new idea, that researchers at several universities in the southeast have been evaluating, is stockpiling Bermudagrass for late-fall grazing to reduce the forage gap before winter grazing is available.

The basic concept of stockpiled forages is to utilize forage varieties with high digestibility such as Tifton 85 Bermudagrass or limpograss, that maintain their quality even when mature.  A hay-field can be managed so that 2-3 cuttings of hay are produced through the growing season, and then fertilized after cutting in August.  Instead of making a fall cutting of hay, the grass is harvested utilizing “frontal grazing,” which is relatively easy to manage with temporary electric fences that are moved every 3-4 days, until all of the grass has been utilized.

Researchers at the Wiregrass Research and Education Center, near Headland, Alabama recently conducted a two-year trial to evaluate the effectiveness of this practice as compared to the standard of feeding hay and a supplement for fall calving cows (2013-13), and are currently evaluating this management technique with weaned heifers (2014-15), as seen in the photo above.  Notice the Bermudagrass that had already been grazed on the right side of the photo.  You can see one of the real advantages of this system is that the cattle primarily graze the high quality leaves and left the course stems behind.  When we make hay, all of the plant is harvested, which lowers the overall nutrient value of the forage.  As you can see in the photo below, because 2015 was so mild, with minimal frost in November and December, the grass stayed green and continued to grow late into the year. 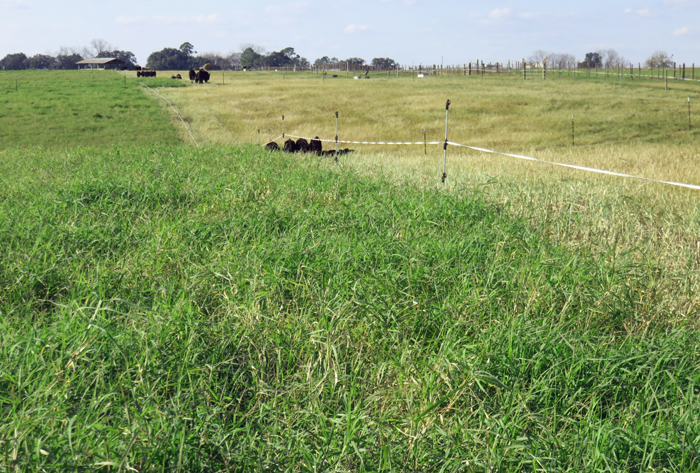 Tifton 85 Bermudagrass can be stockpiled from August through October and then grazed prior to the hard freezes that generally come in mid-January. Temporary electric fences are gradually moved across the field to limit graze the stockpiled grass. Photo taken December 9, 2015 by Doug Mayo.

One of the challenges for using this management technique is determining the stocking rate for the system and how far to move the fences for each grazing period.  For the trial conducted with cow-calf pairs, the stocking rate was set at one cow per acre.  The following formula was used to calculate the stocking rate:

The performance cows grazing the stockpiled Bermudagrass was compared to cows fed free-choice August cut hay that was 10% crude protein (CP) and 51% total digestible nutrients (TDN) plus 6 lbs./head/day of whole cottonseed. Over the two-year study, forage samples were collected at five points throughout the grazing period.  From the chart below you can see that the stockpiled grass was higher in nutrient quality than the hay, even in January, with an average nutrient content of 12% CP and 60% TDN. 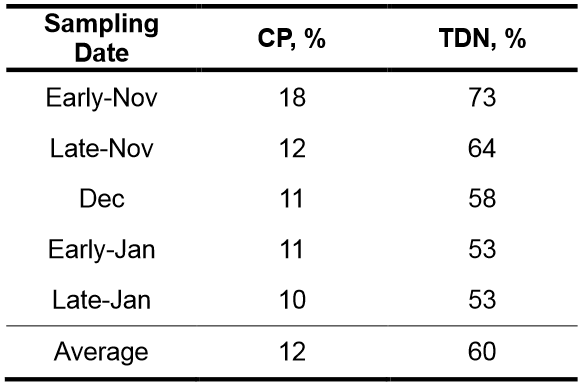 Over the two years of this study, researchers at Auburn were able to provide around 100 days of grazing, with the 1 cow/acre stocking rate.  They were able to reduce the costs for feeding these animals $332 per head during this period.  While the cows did lose some weight, which is expected for fall calving cows, they were able to maintain the cows in an acceptable Body Condition Score (BCS) of 5 to 6 throughout the study.The reproductive performance (88% pregnancy rate) and the weaning weights of the calves (550-620 lbs.) was similar to cows that had been fed the traditional hay and supplement. 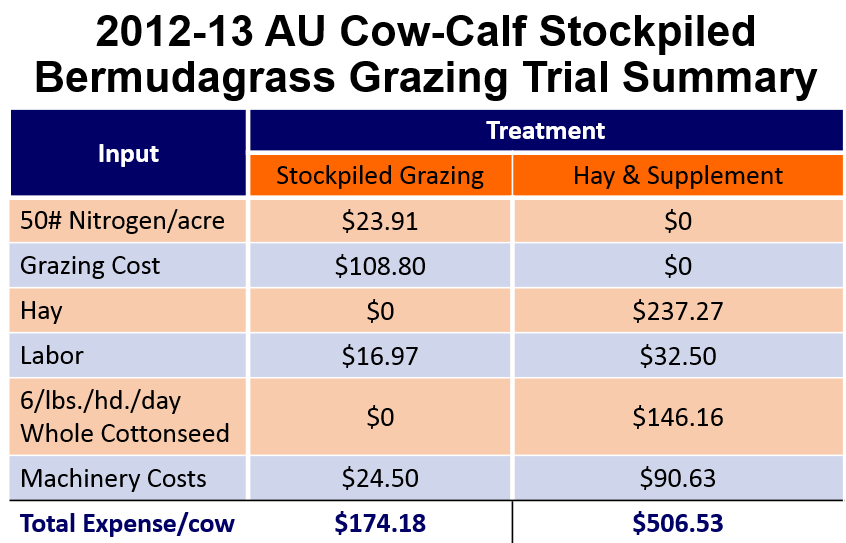 Source:  Stockpiled Tifton 85 Bermudagrass as an Alternative to Feeding Hay for Lactating Cows