Friday Funny: The Pig with a Wooden Leg 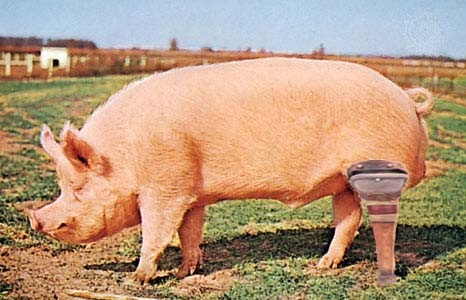 This weeks Friday Funny was sent in by Ed Lewis, Procurement Forester, for WestRock in Cottondale.  Thanks for sharing Ed!

A TV reporter became lost on the back roads and stopped at a farm to get directions. As he was talking to the farmer he noticed a pig with a wooden leg. “This could be a great story for the Six O’Clock News.  How did that pig lose his leg?” he asked the farmer. “Well”, said the farmer, “that’s a very special pig. One night not too long ago we had a fire start in the barn, and that pig squealed so loud and long that he woke everyone, and by the time we got there he had herded all the other animals out of the barn. Saved them all.”

“And that was when he hurt his leg?” asked the journalist anxious for a story.  “Nope, he pulled through that just fine.” said the farmer. “Though a while later, I was back in the woods when a bear attacked me. Well, sir, that pig was nearby and he came running and rammed that bear from behind and then chased him off. He saved me for sure.”

“Wow! So the bear injured his leg then?” questioned the reporter.  “No. He came away without a scratch. Though a few days later, my tractor turned over in a ditch and I was knocked unconscious. Well, that pig dove into the ditch and pulled me out before I got cut up in the machinery.”  “Ahh! So his leg got caught under the tactor?” asked the journalist.  “Noooo. We both walked away from that one.” says the farmer.

“So how did he get the wooden leg?” asked the journalist.  “Well”, the farmer replied, “A pig that special shouldn’t be eaten all at once”!

If you enjoyed this joke, you might also enjoy other Friday Funnies from previous weeks.