The Rap on Bale Wrap 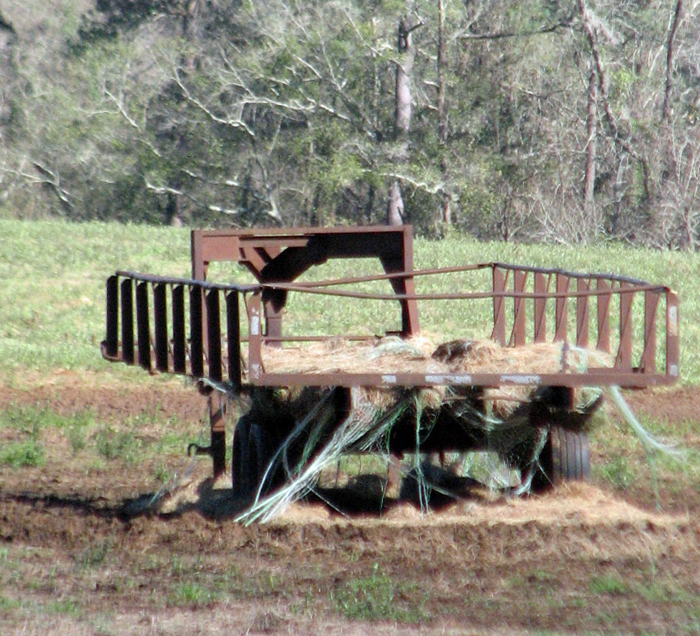 Even if net wrap isn’t removed before feeding, using a trailer to keep the hay off the ground helps keep the pasture free of wrap.  Photo Credit: Jed Dillard

Round hay balers have made large strides in packaging the bale since their introduction. First, there was sisal twine. Rats chewed through it, or it rotted from soil contact. Plastic twine replaced sisal. Those problems were addressed, but single strand wraps still allowed less consistent bale shapes. Single strand wraps were replaced by plastic “Net wraps” which reduced spoilage and resulted in more uniformly shaped rolls.  This process has been positive for hay quality and ease of storage, but plastic has resulted in more problems than just the lack of an endless supply of string to tie up the dog, patch a bridle, make a gate latch, or any of the other infinite “opportunities” a livestock owner has for crude, but effective solutions based on innovative use of available materials.

A field full of net wrap after a winter’s feeding presents several problems. There will probably be lots of weeds emerging in the spring where hay was fed. If you try to mow these areas, you’ll end up with smaller chunks of plastic distributed about your pasture. Not all of the plastic will be shredded. Some of it will wrap around the mower shaft, or the wheels of your mower and push out the seal. Dirt enters the bearings and instead of living out your cowboy fantasies, you’ll soon be up to your elbows in bearing grease replacing bearings. If you don’t try to mow, you’ll have weeds and large chunks of wrap.

As troubling as these issues may seem, there’s a larger risk, especially for producers who grind bales for mixed rations without removing the wrap. John Campbell, head of Large Animal Clinical Sciences at the University of Saskatchewan’s Western College of Veterinary Medicine, necropsied two heavy bred cows which died suddenly and found large pieces of wrap which had caused an impaction in the rumen. http://www.producer.com/2014/06/bale-netting-is-a-cattle-hazard/ He speculates smaller pieces of wrap or twine are able to pass through the digestive tract, but that larger masses are unable to move around the rumen and cause blockage.

Few Panhandle cattle producers are grinding hay bales, but these reports demonstrate the dangers of allowing cattle access to net wrap or twine. Even if cattle don’t ingest wrap or twine left in the field, it’s harder to deal with after feeding than before.  Take the time to remove the wrap from bales before you drop them in the pasture. Cattle prices have fallen recently, but it should be a long time before the price of saving a cow doesn’t justify the time it takes to remove net wrap before feeding.