Controlling Rats and Mice around the Farm 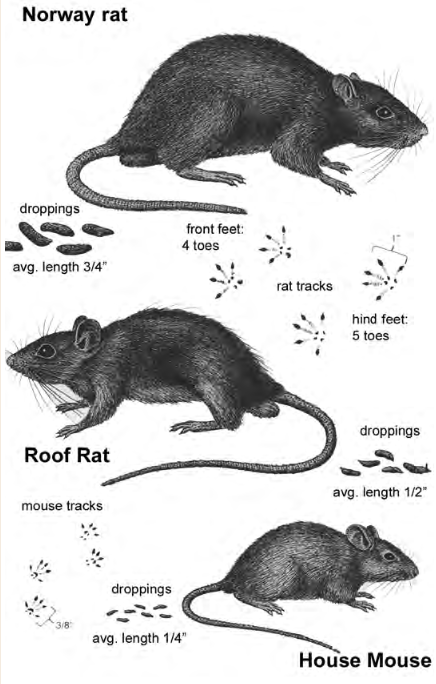 The Norway rat, roof rat, and house mouse are destructive rodent pests in and around farm facilities. This can be especially true during the winter months, as they seek food and refuge indoors. Rats and mice consume and contaminate feed, gnaw on structural, mechanical, and electrical components, and weaken concrete slabs and walkways with their burrowing activities. They can also potentially carry diseases such as bubonic plague, leptospirosis, rabies, and bacterial food poisoning.

Usually the first signs of rodent infestation are droppings or urine stains in and around buildings, because rats and mice are most active at night. If rodents are seen repeatedly during the day, it is an indication of an established population. It is estimated that for every rodent seen during the day around barns and poultry houses, there are likely 20 to 50 that are unseen.

Effective rodent control involves a three step process. The first step is to “rodent-proof” the structure. This is very difficult because rats and mice can squeeze through holes just large enough to pass their heads through, as small as ¼ for mice and ½ inch for rats. They can climb through pipes, jump vertically three feet, horizontally four feet, and climb wires, cables, vines, and trees to enter a building.

To be effective, rodent-proofing must block all possible entry points. Openings must be sealed with mortar, concrete, sheet metal, or hardware cloth (19 gauge or heavier with no openings more than ¼ inch) around augers, pipes and wires where they enter structures. Also, corrugated metal siding should be sealed and corner seams made tight. 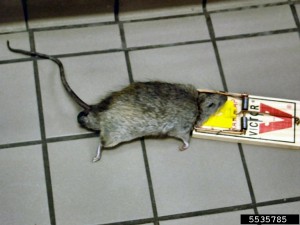 The third step is population reduction with traps and baits. Since rodents have a small home range, rats travel no more than 100 feet and mice less than 30 feet from their nesting site, trapping is an effective, quick and economical method of control. Trapping is often underrated, especially where only a few rodents are present. Common snap traps, glue boards, and live traps can be used to supplement baiting programs, or in situations where baits may pose a hazard. Traps should be placed along walls, near holes, or at right angles along beams, rafters, or other travel ways. Traps may be baited with a variety of food items such as whole nuts, peanut butter, or small pieces of meat.

There are many different types of rodenticides (poison baits) on the market. They may be formulated as bar baits, pellets, concentrates, or tracking powders (Table 1). In most situations, ready-to-use commercial baits are preferred over mix-your-own baits, because they do not require the applicator to handle a concentrated toxicant. Bar baits are formulated with a high wax content for outdoor use and high humidity areas. Pellets are formulated with grain and a binder that holds the pellet together for indoor use. Concentrates and tracking powders are occasionally used by professional pest control operators.

The two most common non-anticoagulant baits are bromethalin and cholecalciferol or vitamin D³. Bromethalin kills rodents by shutting down their ability to produce energy within the cells of the body. A single-dose is usually lethal within 1 to 3 days. It is considered safe, and a minor threat of secondary poisoning, because it causes the rodent to stop feeding days before it dies, so most of the poison has been excreted prior to death and possible ingestion by a predator or pet. Cholecalciferol is a calcium releaser that causes too much calcium to be released into the blood, disrupting body functions. Cholecalciferol kills anticoagulant resistant rodents and there is no problem of secondary poisoning of pets or wildlife that eat poisoned rodents. Cholecalciferol will act as a single-dose poison, if a sufficient amount is consumed by a rodent in one feeding, but it will act as a multiple-dose poison if consumed in lesser amounts over several days.

Zinc phosphide is a single-dose bait which has been used for many years. This is a restricted-use product, which is mostly used for agricultural rodent control, because it offers little risk of secondary poisoning of beneficial predators. However, it has no antidote and is not appropriate for use around children, pets, or livestock.

When using rodenticides, safety must be the first consideration. Poison baits must be placed where they are inaccessible to children, pets, livestock, and wildlife. Tamper-proof bait stations should be used where rodent runs are exposed and in all outdoor situations.

For more information, refer to the following publications used as resources for this article: 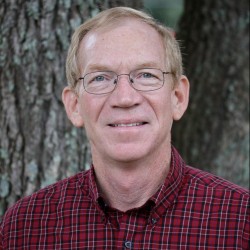