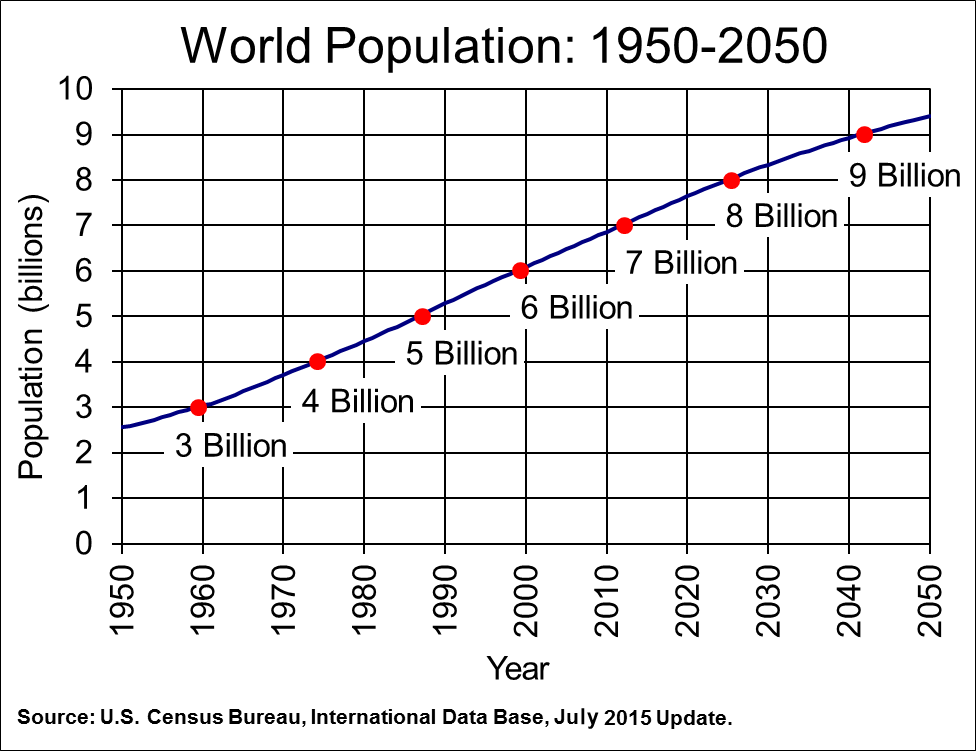 One of the areas of critical concern world-wide is how to meet the food demands for a growing world population while farmland acres continue to shrink.  As you can see from the chart above, the U.S. Census Bureau is currently predicting that the world population will actually reach 9 billion by 2044.  The United States is one of the world leaders in food production and is also expected to grow from 322 million in 2015 to 389 million by 2050.  There are some major challenges ahead because we don’t have more land, so as the population grows, farmland acreage will continuously decline.

The United States Department of Agriculture (USDA) released their annual Farms and Land in Farms report this week.  I was not familiar with this particular annual report, but the numbers are concerning.  According to USDA’s estimates 6.6 million acres of US Farmland has been lost from 2008 through 2015, with a 1 million acre decline last year alone. Closer to home USDA estimates that both Alabama and Georgia lost 100,000 acres last year, and 50,000 acres were lost in Florida in 2015.  The US farming base has shrunk 7% in eight years, yet the world population is continuously growing. 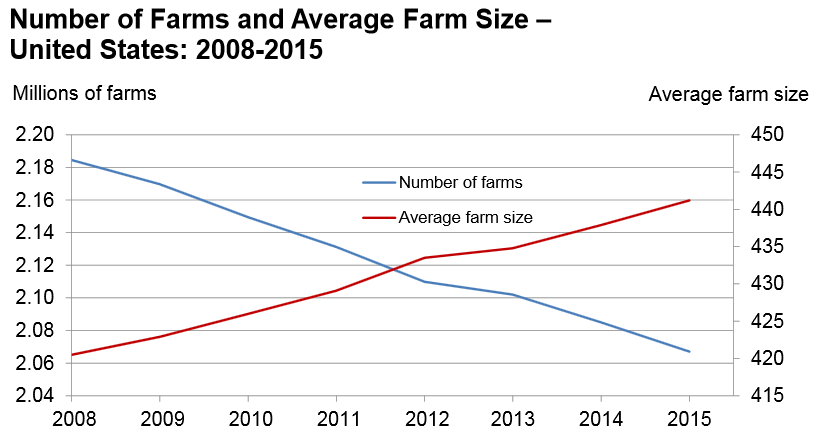 The number of farms has also declined over the past eight years by an estimated 117,500 farms.  The average farm size has increased by 20 acres, which indicates that there is some consolidation, so fewer total farm owners with larger farms.  This is a trend that has been ongoing since World War II, but as the average farm size grows, it also becomes that much harder for a young family to get started with a farming operation.

So what can be done to feed a growing population with fewer farmers and shrinking farmland acreage?

The first two needs identified above are huge.  It will take everyone involved with agriculture working together to address these issues with policy makers at the national and state levels.  However, the key decisions about the future of productive farms lies in the hands of those who currently own and manage them.  This is something every farm family must work on together.  This is also not a do-it-yourself type project.  It takes the help of a professional estate planner to ensure a legal trust is created that will hold up in court if necessary.

There is no single, simple recipe for successful farm estate planning.  Everyone in the family has to work together to develop a plan and then work with professionals to establish the trust that can chart the future of the farm for future generations.  Nobody enjoys estate planning, but if you don’t make the time and exert the effort, farms will eventually be sold off to the highest bidder.  That bidder may not be a larger farm, but instead may be a land investor who is more concerned with profits than a legacy of farming.

UF/IFAS Extension has begun to offer educational programs to help farm families get this process started.There is an upcoming workshop on this topic:  Farm Estate Planning: What will happen to Your Farm? that will be held in Quincy on Thursday, March 31, 2016.  Even if you are really not sure what your family wants to do at this point, the speakers will help you ask the right questions so a plan can be discussed with the family before seeking the help of a lawyer who specializes in this type of work.

The bottom line is that everyone associated with the agricultural industry has a major challenge ahead. The world population is growing, farm acreage is shrinking, and fewer people are willing to take the risk to spend a lifetime farming.  Having enough food for more than 9 billion people in the next 30 years will require significant investment in innovation, a major boost in both productivity and profitability, and doing everything we can to keep our current farmland in production.