With school starting this week, I just wanted to remind you why our kids have to spend 12 years of their lives in school.  It takes that long to learn our crazy language!  We take for granted so many crazy words and phrases that can be very confusing. 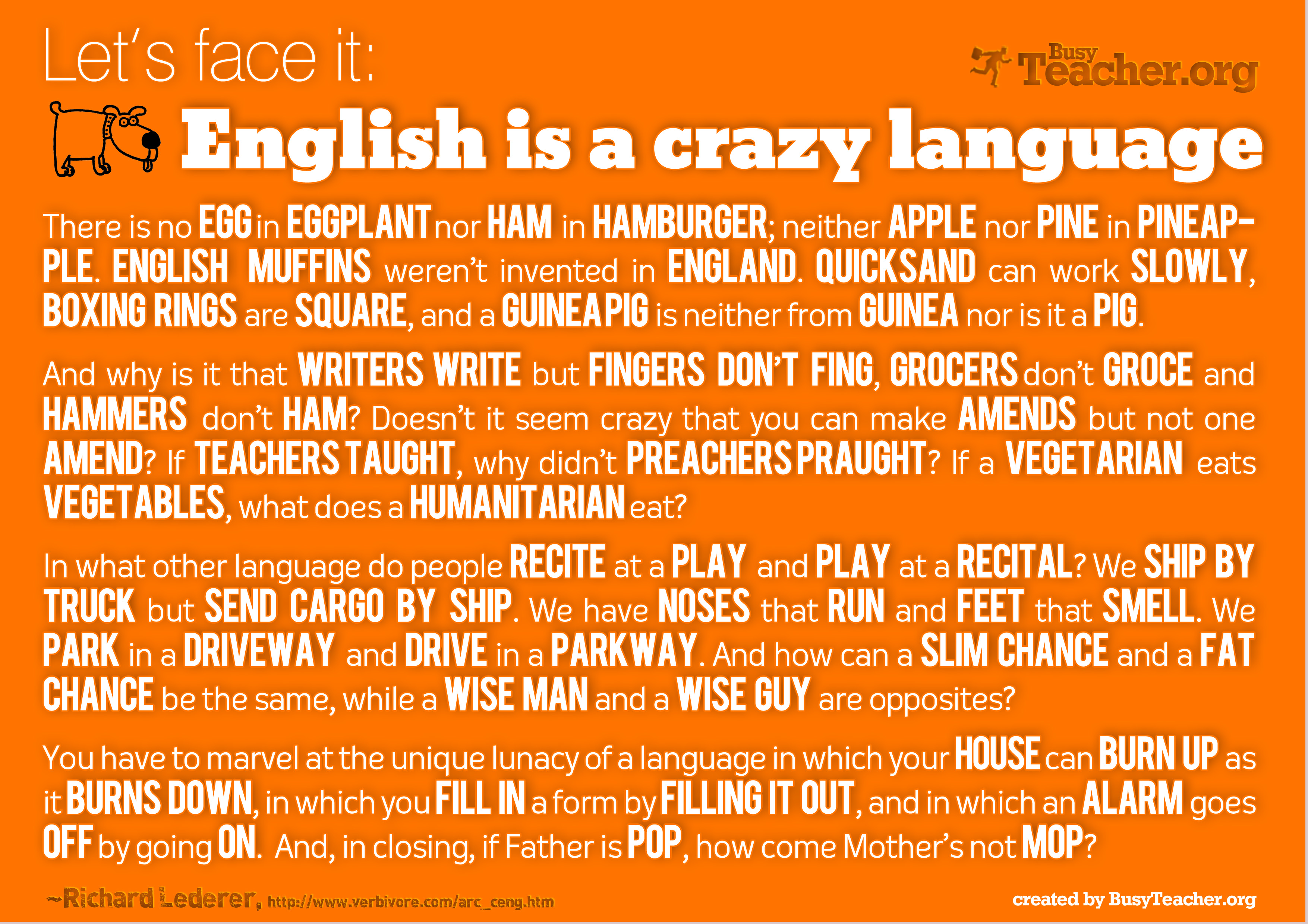 And if that did not convince you:

A waiter.  Why do they call those food servers waiters, when it’s the customers who do the waiting?

A non-stop flight.  Never get on one of these.  You’ll never get down.

A near miss.  A near miss is, in reality, a collision.  A close call is actually a near hit.

A hot water heater.  Who heats hot water?  This is similar to garbage disposal.  Actually, the stuff isn’t garbage until after you dispose of it.

A hot cup of coffee.  Here again the English language gets us in hot water.  Who cares if the cup is hot?  Surely we mean a cup of hot coffee.

Doughnut holes.  Aren’t those little treats really doughnut balls?  The holes are what’s left in the original doughnut.  (And if a candy cane is shaped like a cane, why isn’t a doughnut shaped like a nut?)

I want to have my cake and eat it too.  Shouldn’t this timeworn cliché be I want to eat my cake and have it too?  Isn’t the logical sequence that one hopes to eat the cake and then still possess it?

I’ll follow you to the ends of the earth.  Let the word go out to the four corners of the earth that ever since Columbus we have known that the earth doesn’t have any ends.

It’s neither here nor there.  Then where is it?

Extraordinary.  If extra-fine means “even finer than fine”  and extra-large “even larger than large,” why doesn’t extraordinary mean “even more ordinary than ordinary”?

Daylight saving time.  Not a single second of daylight is saved by this ploy.

Preplan, preboard, preheat, and prerecord.  Aren’t people who do this simply planning, boarding, heating, and recording?  Who needs the pretentious prefix?  I have even seen shows “prerecorded before a live audience,” certainly preferable to prerecording before a dead audience.

Put on your shoes and socks.  This is an exceedingly difficult maneuver.  Most of us put on our socks first, then our shoes.

The bus goes back and forth between the terminal and the airport. Again we find mass confusion about the order of events.  You have to go forth before you can go back.

Watch your head.  I keep seeing this sign on low doorways, but I haven’t figured out how to follow the instructions.  Trying to watch your head is like trying to bite your teeth.

They’re head over heels in love.  That’s nice, but all of us do almost everything head over heels.  If we are trying to create an image of people doing cartwheels and somersaults, why don’t we say, They’re heels over head in love?

Put your best foot forward.  Now let’s see…. We have a good foot and a better foot — but we don’t have a third — and best — foot.  It’s our better foot we want to put forward.  This grammar atrocity is akin to May the best team win.  Usually there are only two teams in the contest.  Similarly, in any list of bestsellers, only the most popular book is genuinely a bestseller.  All the rest are bettersellers.

I lucked out. To luck out sounds as if you’re out of luck.  Don’t you mean I lucked in?

And farm folks have some craziness as well

The farm was used to produce produce

The buck does funny things when the does are present

To help with planting, the farmer taught his sow to sow

Hey guys let’s get this hay baled so we can go home.  I am tired and ready to hit the hay!

A truly great farmer is one who is outstanding in his field!