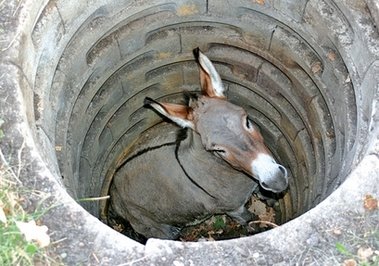 One day a farmer’s jackass fell down into an old abandoned well on the old homestead.  The animal brayed and squealed pitifully for hours.  The farmer was going crazy, because he could not figure out what to do.  He and his wife hardly slept at all, as the poor creature squalled and caterwauled in agony and fear all night. The next morning, the farmer decided there was just no way to get the jackass out of the well. If he rented a backhoe to dig out the well, the walls would probably collapse, or the bucket would mangle the poor creature.  He could not use a winch to pull him out, because there was no way to get the cable around the jackass without endangering his own life.  Ultimately he decided the humane thing was to put the jackass out of his misery by covering him up in the well.  At least that way no other animals would succumb to the same fate as his poor jackass.

Since the farmer did not have a front end loader or a backhoe, he just invited all his neighbors to come over and help him. They all brought their own shovels worked together to quickly fill in the well.  As soon as the jackass realized what was happening he commenced to caterwauling like nothing you have ever heard.  Tears rolled down the men’s faces as they slowly buried the old jackass. All of a sudden the jackass was quiet. The men kept working in silence glad that that hardest part was over, but sad because of the harsh reality of what they had all done. 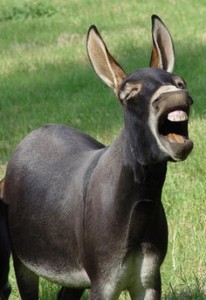 The moral of the story is:  Every time you try to cover your ass, it always comes back to bite you.