The Peanut Burrower Bug – an Emerging Pest in Peanuts

Burrower bugs are small Heteroptera insects with piercing/sucking mouthparts (Figure 1). There are six different species of burrower bugs that have been found to feed on peanuts. Among them, three are found in Georgia and Florida, but most of the damage has been attributed to the peanut burrower bug Pangaeus bilineatus. This species is native to Georgia, but can be found as far north as Connecticut. This species can survive up north despite the absence of peanuts, because it feeds on other plants such as cotton, peppers, strawberry, spinach, oak, peach, or pear.

Adults become active in the spring and lay eggs in the soil, while nymph activity is reported as early as mid-May. Burrower bugs spend most of their life cycle underneath the soil, feeding on mature peanut kernels and pods. Adults and nymphs feed directly on the peanut seed during the mid to late pod-fill by piercing the pods with their specialized mouth-parts.

Figure 1 (A) Adult and (B) nymph of the peanut borrower bug. Photo credit: Mark Abney, University of Georgia

Despite the fact that damage on peanuts has been described for decades, it is only recently that burrower bug has become a recurrent problem in peanut crops in Georgia, Alabama, and Florida. The peanut burrower bug damages peanut kernels directly by feeding on them. The insertion of its mouth-part in the maturing kernel produces yellow feeding spots called “pitting” (Figure 2). Additionally, the peanut burrowing bug also affects peanut quality due to an increase of peroxide levels, and a rise in aflatoxin contamination. As peanuts grown in the USA are graded according to kernel internal damage, even a slight percentage of burrower bug damage might be detrimental for growers. With more than 2.5% of kernels showing internal damage, peanut grade drops to segment 2, and the value of the peanut load is dramatically reduced. 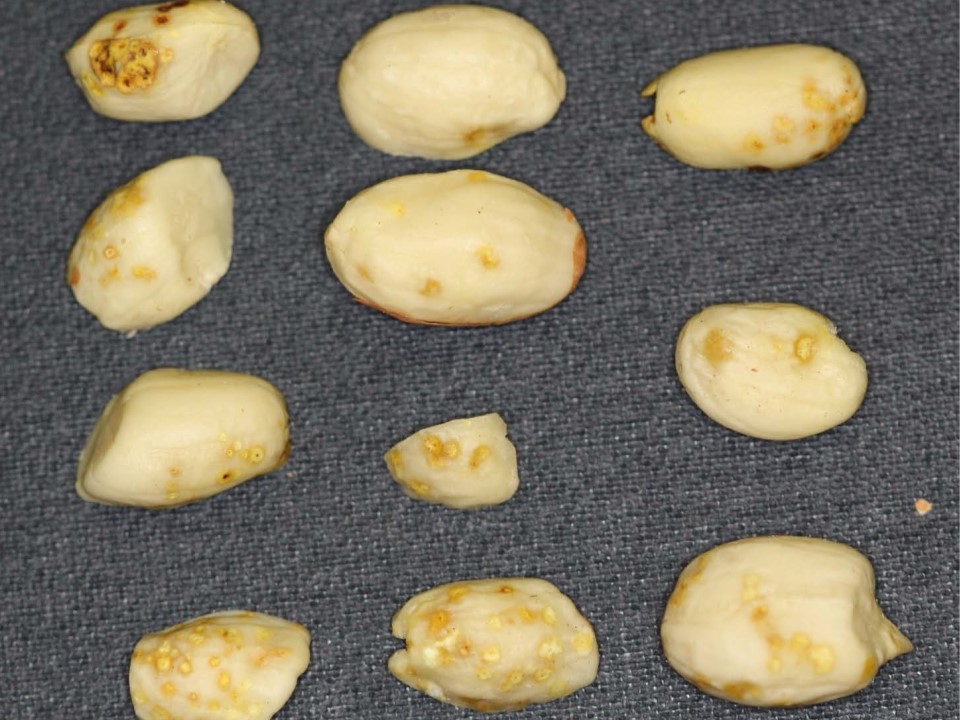 Burrower bugs can be sampled either by the use of pitfall traps or light traps during spring and summer. The main control methods for this pest is the application of granular chlorpyrifos at planting or at pegging.  However, the EPA is currently moving forward to potentially revoke all food residue tolerances for chlorpyrifos. Therefore, it is possible that, in the very near future, growers will have to turn to other insecticides such as bifenthrin, imidacloprid or lambda-cyhalothrin. However, the efficiency of these insecticides on burrowing bugs needs to be fully evaluated. Regarding biological control, the entomopathogenic nematode Heterorhabditis bacteriophora has been described as a potential control agent. Cultural methods to reduced burrower bugs populations include irrigation, as this bug prefers dry conditions. Conventional tillage can also reducing burrower bug population, however, this has to be counterbalanced with the benefits of conservation tillage that include the improvement of soil tilth, the increase of organic matter, the reduction of water evaporation, and the reduction of soil erosion.

More information on peanut pest management is available in the following UF/IFAS publications: