Friday Feature: A Tribute to Bud Adams – One of Florida’s Greatest Cowmen 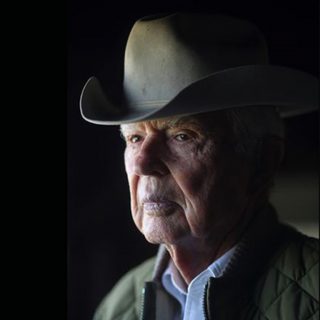 Florida has lost one of the all-time great cowmen and conservationists! Alto “Bud” Adams, Jr., passed away at the age of 91, on September 22, 2017, at his home on Adams Ranch near Ft. Pierce, Florida.  Bud Adams and his family have owned and managed the 50,000-acre, Adams Ranch since 1937. Adams Ranch is the 15th largest Cow-calf Operation in the US, managing a 10,000 head, brood cow herd.  Not only was Bud a cattlemen of great vision, but he was also nationally recognized for his efforts in land, water, and wildlife conservation.

As a tribute to Bud Adams, it seemed only fitting to share three videos that were produced to share the story of this historic Florida cattle family.

The first video was shared on an episode of America’s Heartland that was produced in 2011.

The next video was produced when Bud Adams was inducted into the Florida Agriculture Hall of Fame in 1999:

The third video was an episode of  The Ride with Cord McCoy that showcased the Adams Ranch with interesting interviews with Bud Adams and other ranch employees that was aired on RFD-TV on July 7, 2014 :

The following obituary was provided on the Adams Ranch website:

Bud Adams was born in Ft. Pierce April 4, 1926. For the next 91 years he lived a life everyone could envy, but only a few could handle. A Christian man, he taught his family and friends by example. He always had a firm handshake, and his word was his bond. His love for the outdoors, especially the Florida prairies and woodlands, were evident in not only his holistic approach to land management, but also his talent for photography. Mr. Bud could find God’s beauty in plants, animals and people, and was able to capture these images on film for the rest of us to enjoy. We are all grateful for his generosity and grace.

Bud traveled to Tallahassee and attended Leon High School while his father served on the Florida Supreme Court. At 18, he joined the US Navy at the end of WWII, and was part of our greatest generation. He graduated from the University of Florida. While a career in law or politics could have been in his future, Bud chose the life of a cowboy. He had fond memories of working alongside many of the founding families of modern day Florida, as well as of the many Seminole Indians he befriended as a young man in the days before fences. His father Judge Alto Adams made him a partner in the ranch in 1937 and Bud has run the ranch since 1948.

Bud was a proud member of the Florida Cattlemen’s Association, serving as President in 1958. For the last 59 years he had been a fixture at most every gathering of past-FCA Presidents, always offering kind advice to upcoming FCA leadership.

There are many things Bud was responsible for that will be around for generations to come. One is the Braford breed of cattle. Adams Ranch in Ft. Pierce is home to the foundation herd of this hearty breed. 5/8 Hereford and 3/8 Brahman, these red cattle quickly showed tolerance to Florida’s tropical climate, and flourished in the heat and rain. Mr. Bud was proud to say that if you bought one of his bred cattle, she would take care of the calf with no help needed from anyone. He was a founding member of the United Braford Breeders Association, located in Tyler, Texas.

Another monument to Bud’s life in agriculture is the land he bought, developed, managed and cared for. He was a pioneering advocate of conserving and protecting this land for future generations. His efforts and leadership have been awarded nationally. More importantly, when other landowners saw Bud endorsing and leading these conservation efforts, they were drawn to do the same through his trustworthy and honorable reputation. Bud has written three books describing his career as a rancher and steward of Florida lands.

If you enjoyed this video, you might want to check out the featured videos from previous weeks:  Friday Features

If you come across a humorous video or interesting story related to agriculture, please send in a link, so we can share it with our readers. Send video links to:  Doug Mayo