It’s only February, but it will be April before you know it. That means it is time to start planning for peanut and cotton planting season.

If you’re a peanut grower, you’re placing your orders for GA-06G now. Which is great – it’s a cultivar that sets a high bar for disease resistance and yield potential. You probably should continue to plant most of your acreage to GA-06G. But consider planting some acreage with other cultivars as well, just to test them out. There are a few promising cultivars on the market, such as GA-13M and GA-12Y. 12Y has excellent tomato spotted wilt virus (TSWV) resistance with high oleic oil, and although it may be susceptible to Rhizoctonia limb rot, it has yielded nearly as high as 06G. Consider planting smaller acreage to newer cultivars to see how premiums play out, and test if they work well in your situation.

Some growers int the area say they don’t like the high oleic cultivars, because of their reduced disease resistance, but in the end, they may yield as well as 06G, even if they don’t retain leaves as well. Be smart. Don’t let looks fool you. Keep your eyes on the ledger sheets. Even if they don’t look as good in the field, they may improve your bottom line – but you won’t know unless you try them. The key here is to start with small acreage, essentially doing your own variety testing on your farm. It really doesn’t cost that much to plant a few passes of different cultivars. Just make sure you keep records of what you planted where, and have a weigh wagon at the end of the season. Check out the reulsts from the variety and fungicide testing trials conducted in Jay for more information. (Remember that propiconazole restrictions are still in place for exported peanuts.)

The same applies to cotton cultivars. In this area, we’ve seen an increase in planting of “stovepipe” varieties that have more erect growth and lap the middles later in the season, which may reduce target spot incidence, an increasingly problematic disease in the Southeast. In some fields in west Florida, I didn’t see lapping of rows until early August last year, which may present weed control challenges, but also increase airflow in the canopy – corresponding with very low target spot incidence last year. I would encourage growers to try small acreage of different cotton cultivars to see which cultivars work best for their conditions – and let me know what works for you. Be sure to check out the 2017 cotton variety trial data, as well as previous years’ data for cotton variety selection. And again, start with small acreage first to see how cultivars respond in your microclimate and soil conditions.

Early-season conditions for cotton and peanut

Current predictions call for a 40-50% chance of above normal temperatures in the next 6 weeks.

They also call for a 40-50% chance below normal precipitation probability over the next 6 weeks.

If those predictions become reality, higher temperatures coupled with lower precipitation, that means you cannot afford to delay planting. Make sure you have your seed ordered early and plant in the early part of the planting window, to take advantage of warmer temperatures, but try to time planting ahead of rainfall, if you don’t have irrigation. If you’ve had white mold issues, make sure you have a good white mold control program in place to get the product to the crown of the plant where it is needed. This might mean night spraying, or trying a “canopy opener” spray rig that increases product application where it’s needed at the soil-plant interface.

Urea prices remain near 5-year lows, but it’s usually worth a phone call to your local suppliers to see who has the best prices in your area. This year I am finding that differences in nitrogen prices are smaller than in previous years, hovering around $400/ton for bulk urea.

Even though nitrogen (N) is relatively cheap right now, fertilizer is still the highest operational cost for cotton and corn production. Use it wisely. Split applications of N. Incorporate urea with water or tillage. A 2×2 placement of N with phosphorous (P) will increase P uptake, particularly during the early season when temperatures may be cooler, because the roots won’t have to “look” for it.

Average operating costs for cotton in the South:

Average operating costs for peanut in the South: 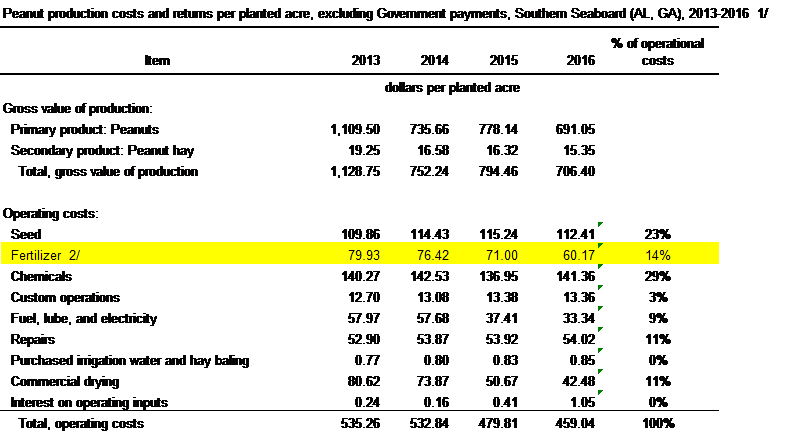 Average operating costs for corn in the South: 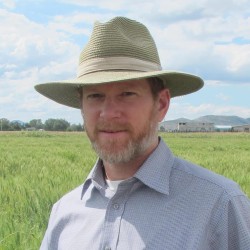