Throughout the world, dung beetles are important beneficial insects to cattle pasture ecosystems, as they support the processing and removal of livestock waste. With approximately 1.7 million beef cows and calves, and 115,000 dairy cows that contribute $848 million in combined revenue every year in beef and milk sales, the cattle industry is an important aspect of the Florida economy. Dung beetles are an important component of the cattle industry in the Southeastern United States, where beef and dairy production is typically pasture-based.  There are approximately 11 million acres of grasslands in Florida alone. Florida has a highly diverse population of dung beetles and many exotic species have entered the state after being released throughout the Southeast United States in the 1970s in order to increase cattle dung degradation.

Although, the removal of dung deposits is the most recognized benefit of dung beetles, there are multitudes of other benefits cattle producers get from these small decomposers: nitrification prevention in water bodies, reducing greenhouse gas emission from pastures, and potential pestiferous fly reduction. Blood feeding flies such as the Horn Fly (Haematobia irritans) reproduce in fresh cow dung, and as adults, can stress and render cows anemic in high numbers. When dung beetles consume and bury dung, they remove the resources horn flies need to reproduce. 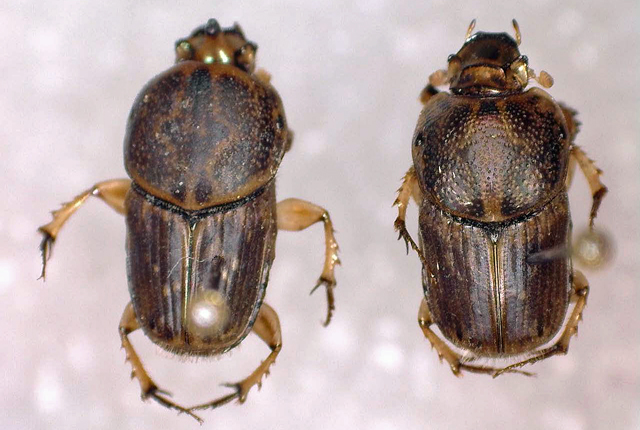 Researchers at the University of Florida recently evaluated dung beetle communities in North Florida, and how they respond to different habitat types.  Pastures were dominated by the introduced species Digitonthophagus gazella (Fig. 1 top) in late summer, and Euoniticellus intermedius (Fig. 2 above) became the dominant species in the fall. Among the native species present in these pastures, the most common species was the large and colorful Phaeneus vindex (Fig. 3 below). 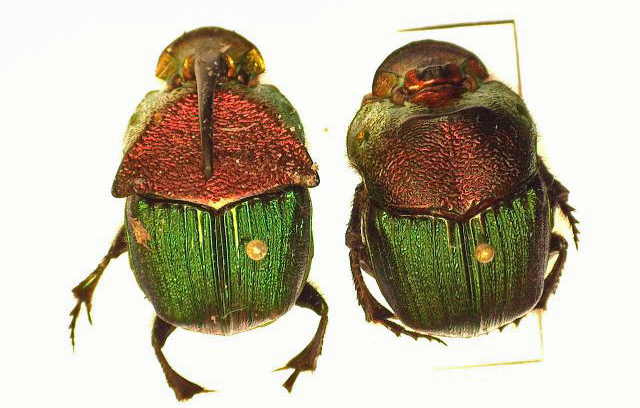 In forest and open field, researchers observed a different story.  They did not collect any of the introduced species that had been captured in pastures. Instead, they collected low numbers of 17 different native species of dung beetles, that appeared to be active throughout the season, peaking in early to mid-summer (Fig. 4 below). This lack of exotics may be indicative that exotic and introduced dung beetles are unable to survive without the consistent presence of livestock, and are unable to expand to natural areas. Forest habitat hosted a higher amount of diversity, but a lower total population of collected beetles. The forest was dominated by Ateuchus leucontei, and Ateuchus histeroides, while the open field was dominated by Onthophagus oklahomensis, though this species was collected in both areas. Phaeneus vindex, the large colorful beetles, that were also collected in pastures, showed a significant preference for the open field. The dispersion and distribution of the different species appeared to be influenced by habitat design.This study demonstrated that dung beetles are quite sensitive to habitat changes and eco-design. Different habitats can either encourage or exclude different species, based on the ecological profile of the property.

Many livestock producers have asked about increasing the dung beetle population on their farms, but this study, along with past research, shows that there are already large populations of beetles that are well established, where livestock have been continuously raised. Therefore, land management practices are encouraged to increase beetle diversity. Conservation of unexploited open field and woodland adjacent to pastures should help in increasing local dung beetle population within the pasture. Relying only on exotic dung beetles may turn out to be problematic, as they can be more susceptible to North American pathogens, and are unfit to sustain populations off wildlife only, if the livestock are removed from a property for an extended period. In addition, different species of dung beetles display different behaviors of processing dung (tunneling, rolling, and dwelling); therefore, keeping a high diversity population of dung beetles could help in processing dung more efficiently. Having more diverse habitats mixed with their pastures should encourage greater diversity of dung beetle species, which in turn can lead to more effective dung removal and fly control.