Throughout my 22 year history as an Extension Agent, I have been the first responder for all sorts of strange things farmers, ranchers, and landowners encounter.  This is one of the critical roles county agents play all over the country.  If you see something odd or unusual, whether it is a new weed, insect or disease, your county agent should be one of the first people you contact to get information.  It is very possible that if you find something you have never seen before, others may not have not seen it either.  County agents are connected to a vast network of experts and identification labs that can help figure out what those strange new things are. Because of the ports, huge numbers of visitors, and tropical storms, new pests and diseases show up in Florida on a regular basis.  It is very important to have new pests identified, before they have the opportunity to spread.

Most of the time the plants, bugs, and diseases agents have identified by experts are harmful in some way to the crops we grow.  Whether it is toxic weeds in pastures, insects feeding on plants, or diseases in crops, the first thing you need to know is, “What is it?” Once the issue is identified, most of the time there are some type of control options available.  Sometimes, however, things are not at all what you expect.  Such was the case this summer as four types of plant pests were identified that turned out to be harmless, and in some cases were actually beneficial. 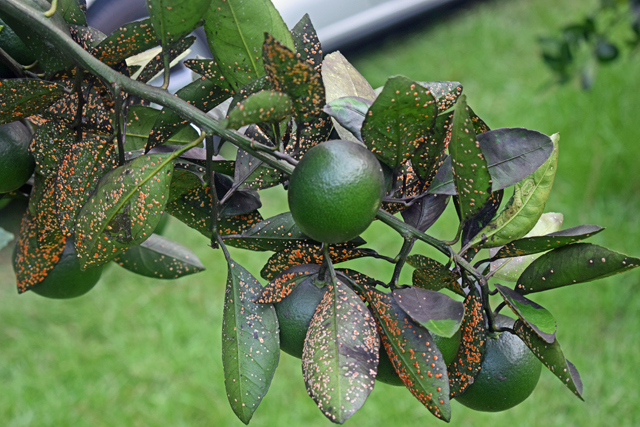 A citrus grower thought that his satsuma trees were under serious attack.  White flies were already an issue as noted by the sooty mold growing on the leaves, and then this terrible scale that he had never seen was all over the undersides of the leaves of the trees.  While from a distance this looks much like a harmful scale insect, it turned out to be a beneficial fungus that destroys whitefly nymphs!

What you have is not scale, it is citrus whitefly nymphs that have been attacked by an entomopathogenic fungi called Aschersonia aleyrodis. It is very good to have this fungus, because it helps control the whitefly population.

You can read about this in the Featured Creature article entitled: Citrus Whitefly.  Scroll down to the section called: Parasitic fungi for more details. 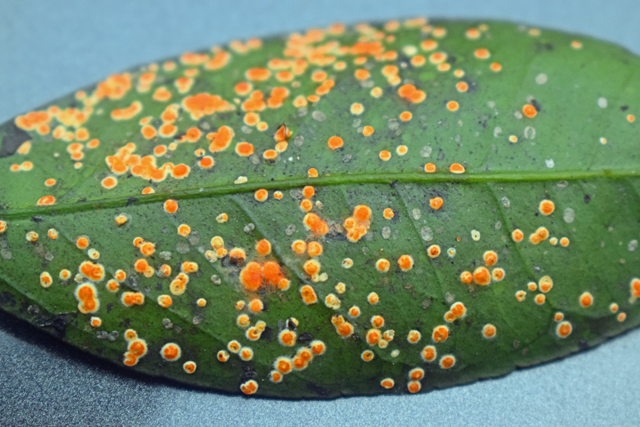 Aschersonia aleyrodis fungus on the underside of a satsuma leaf looks terrible, but it was actually making a bad situation better by reducing the whitefly population on young satsuma trees. Photo credit: Doug Mayo, UF/IFAS. 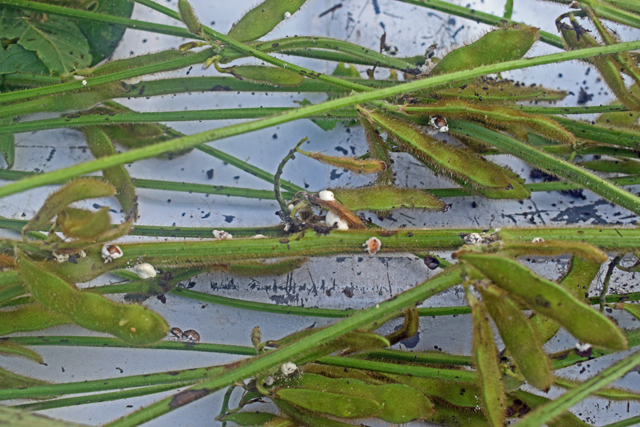 A soybean grower saw something he had never noticed before.  A white mold was growing in spots all over the stems of soybean plants in a field.  This is where you have to be careful.  Soybeans can get white mold, which is caused by the fungus Sclerotinia sclerotiorum.  If you do a google search for Soybean white mold, you will find pictures that look somewhat similar.  Upon closer inspection, at the NFREC Plant Pathology Lab, in Quincy,  the fungus was actually Beauveria bassiana which is a biological control of kudzu bugs.  The white spots in the photos are actually dead or dying kudzu bugs, and the fungus was growing on the insects, not the soybean stalks.  You can read more about this beneficial fungus at: Kudzu bugs’ decline is attributed to two factors. 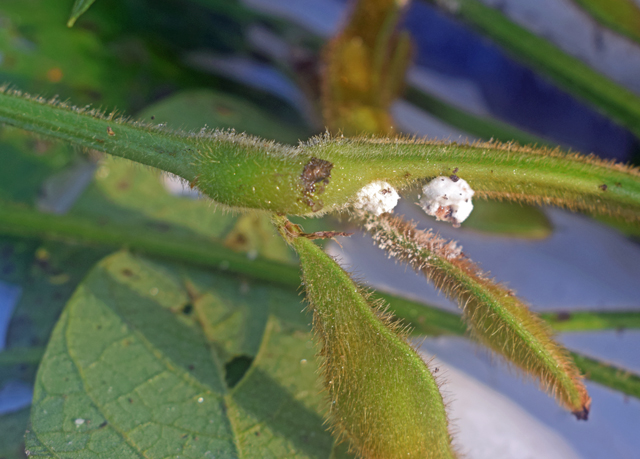 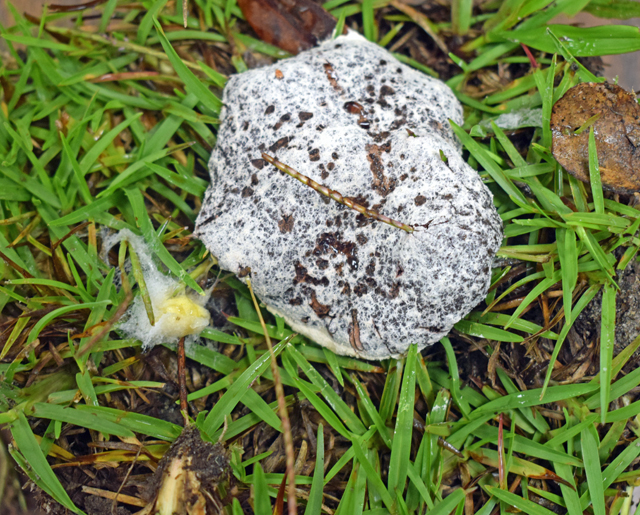 A landowner noticed this really strange growth on her centipede lawn.  It looks hideous and destructive.  In truth, it was a relatively harmless plasmodial slime mold, named Fuligo septica.

Slime molds mostly function as saprophytes, feeding on and breaking down organic matter. It should not cause any permanent problems or major damage to the lawn. One such slime mold is commonly referred to as “dog vomit” slime mold.

Here is a link to an article on slime molds that pop up on lawns, in mulch, and damp areas under trees with high organic matter: Those Mysterious Molds 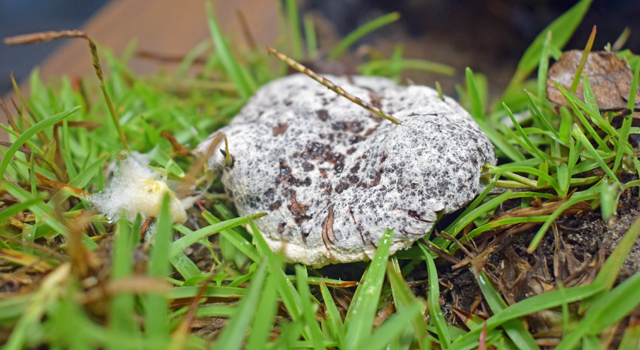 Oklahoma State University’s diagnostic labs had gotten so may calls from concerned homeowners that they developed a YouTube video on slime molds: 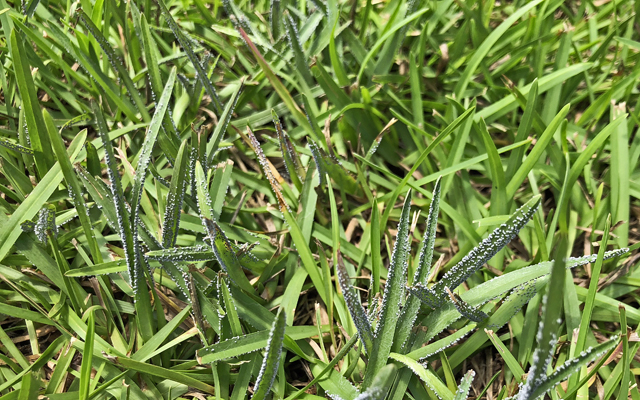 A similar scenario was seen on a centipede lawn at a county building in Jackson County.  This slime mold is commonly found on lawns and pasture grasses during extended rainy periods in Florida. While it looks like a serious disease, it is really just another plasmodium species that feeds on decaying organic matter.  As with the large slime mold in specimen 3, what you are seeing is actually the spore masses that will generate more slime molds when conditions are favorable again for growth.  You can knock these off with a garden hose, if you want to, but they disappear almost as fast as they form.  No real harm is done to the grass that is just serving as a platform for slime mold reproduction.

Most of the time, when you see something that does not look normal it is a bad thing, such as weeds, fungal diseases, or damaging insects. But before you spend money on a control, it is really important to have a positive identification of the pest.  Not everything unusual is harmful.  Modern pesticides have become very target specific, so it is vital to first find out what this new thing is before you spend money trying to control it.  So the next time you see something alarming or strange in your crop, pasture, or landscape, contact your local county agent, so you can find out for certain what you are dealing with, and get some science-based advice on a plan of action, if one is needed.