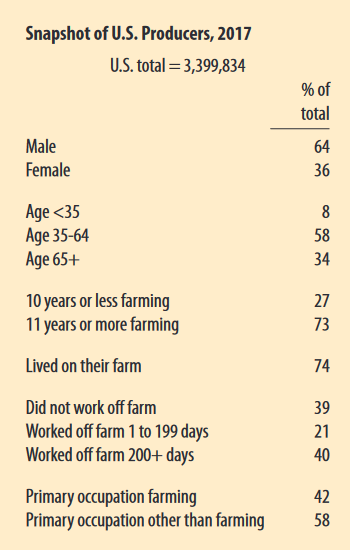 Every five years, farmers from across the U.S. complete detailed questionnaires that provide the best statistical information available about the farming industry in this country.  State and county data from the 2017 US Census of Agriculture was released in April 2019.

In 2017, there 3.4 million farmers (producers involved in decision making) on 2 million farms in the U.S., that farmed 900 million acres and sold $388 billion worth of agricultural products.  There were 2.4 million hired workers on farms, so a total of 5.8 million people were actively engaged in American farming in 2017.  The total population of the United States was estimated to be 327 million on July 1 of 2018, so that means that 1% of Americans are farmers, and only 1.8% of the people in this country are actively engaged on working farms.  With so few people actually working on farms, it is important that everyone involved in agriculture be able to share the story of this vital industry of our country. 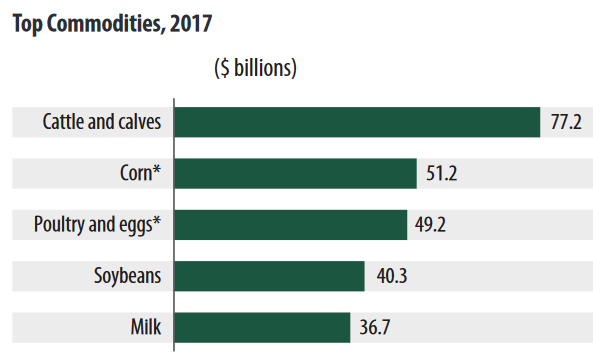 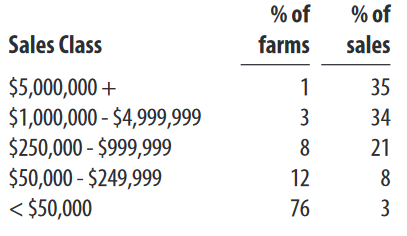 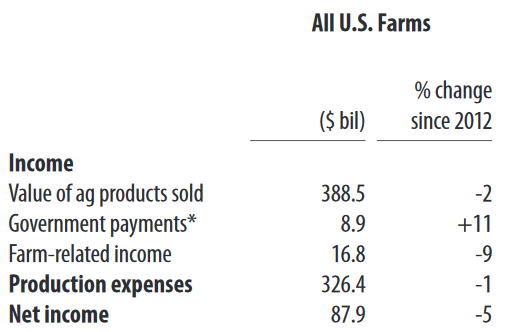 Unfortunately the value of farm products dropped 2% as compared to 2012, and farm income dropped 5% over the past five years.  Looking at the chart above the need is clear for the Farm Bill Programs that keep food costs down, yet also keeping farmers in business.

In 2017, Florida had 47,590 farms that managed 9.7 million acres, and  produced a total market value for all products sold of $7.4 billion.  The largest farm category by sales was the $2.3 billion ornamental industry (nursery, greenhouse, flowers, and sod).  The second largest category by sales was the citrus, strawberry, blueberry and pecans with $2.2 billion, followed by the vegetable crops in third with 1.3 billion.  Our Florida row crops don’t fit neatly in the national categories, and were divided up somewhat, so it is much harder to see the impact of the row crop industry in Florida. Peanuts were included in the “other crops” category that also includes hay sales.  But if you add together cotton, other crops, grains,and tobacco the total market value of product sold was $845 million, which would have been ranked 4th.  Florida cattle operations brought in $521 million in sales in 2017, ranking 5th. 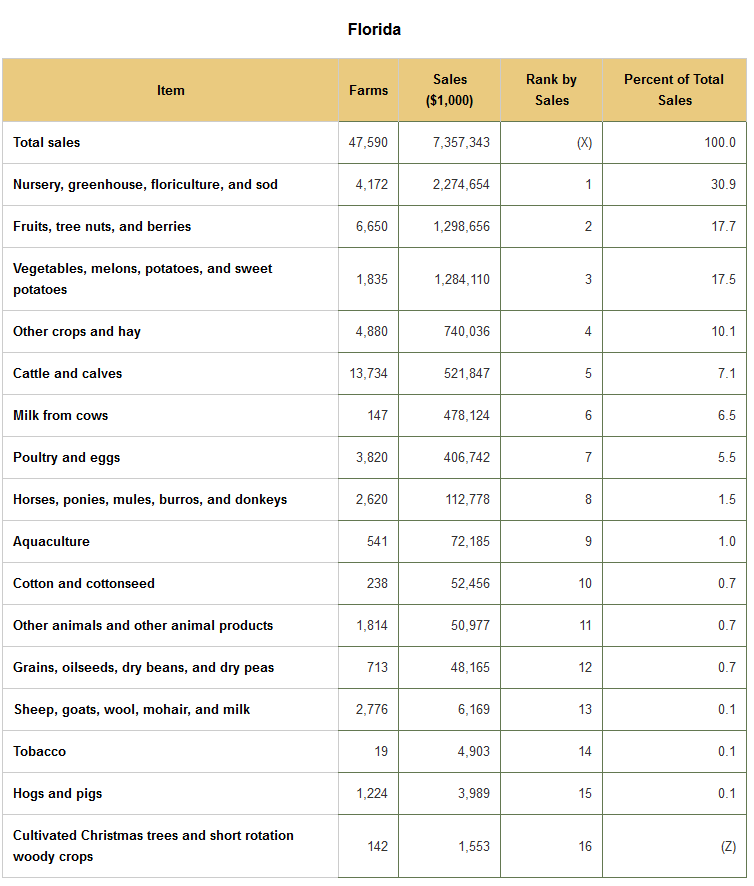 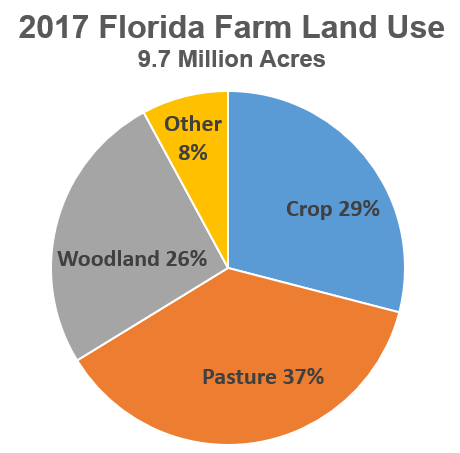 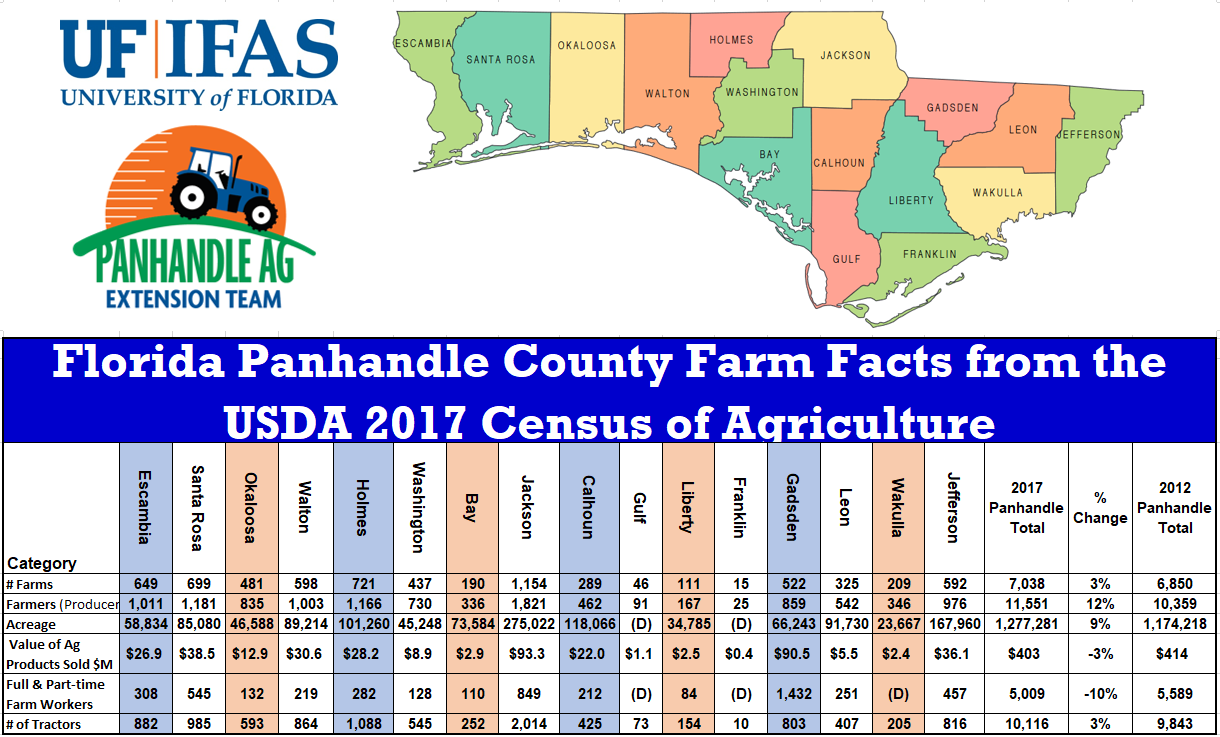 Over the past five years, farms in the Panhandle actually increased in all categories:  +3% number of farms, +12% farmers (decision making producers) and +9% acreage. These farms also purchased 10K tractors, up 3% over 2012.  Unfortunately, the value of the crops and livestock sold dropped 3%, and there were also 10% fewer hired workers than five years ago.  Of the 16 counties in the Florida Panhandle, Jackson County had the most agricultural land in production with 275K acres, followed by Jefferson (167K), Calhoun (118K), Holmes (101K), Leon (92K), Walton (89K), and Santa Rosa (85K). All total, there were 7,038 farms that sold $403 million worth of farm products, produced by 11.5K farmers on 1.3 million acres in 2017 from all 16 Panhandle counties.

The number of vegetable and melon farms (+6%) increased in 2017, on almost 9K acres (+68%).  The number of blueberry and strawberry farms increased significantly (+37%), but the total number of acres declined (111%).  There was a small increase in citrus/pecan orchards (+3%), but total acreage declined (-9%).  There were fewer nurseries (-20%) than five years ago, but the largest decline was in watermelon acreage (-30%).

Want more details on the information from your home county?

Florida County Data from the 2017 Census of Agriculture