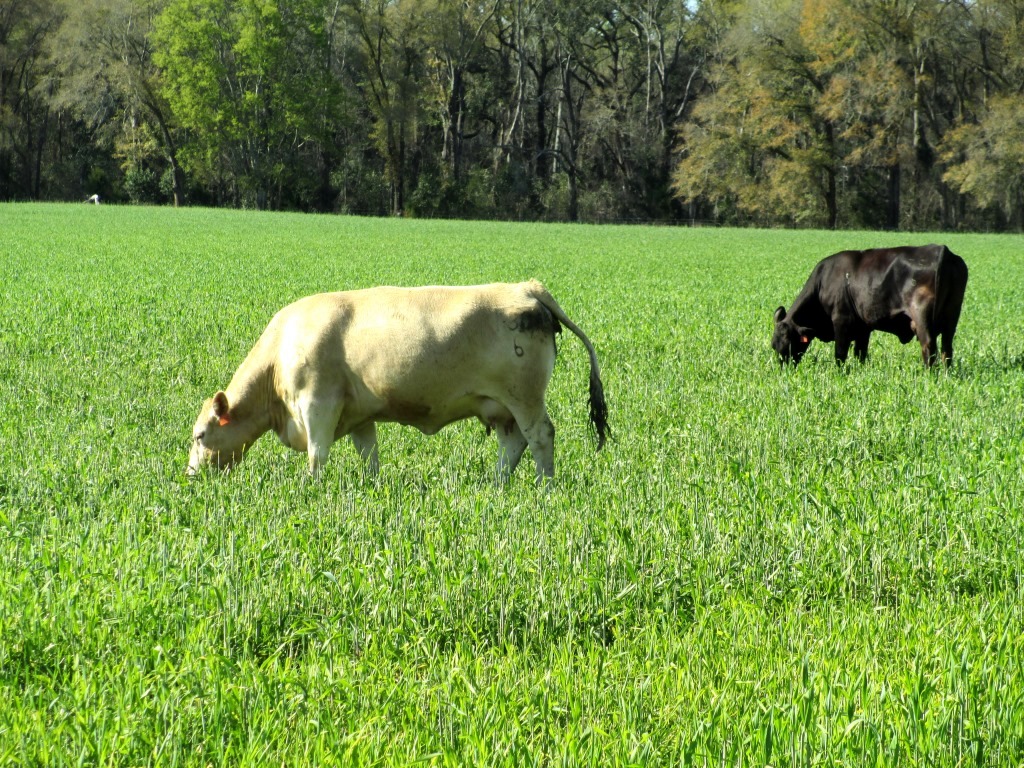 Perennial warm-season pasture grasses used in Florida become dormant in late fall and winter because of short days, cooler temperatures, and frosts. Many livestock producers may choose to establish cool-season annual pasture species to supplement their forage production. These plants are usually higher in total digestible nutrients (TDN) and crude protein (CP) than summer perennial grasses. Planting and growing these forage crops can involve considerable expense, and is somewhat risky because rainfall is often unpredictable during the fall establishment period. The species and varieties for potential use vary in the distribution of production during the cooler months and in the type of soils where they are best adapted.

Many cool-season forages are also grown as silage crops or as cover crops, in addition to their use for grazing. If grown for silage or cover cropping, delaying planting by 1 month, or similar planting dates to those of varieties grown for grain, is recommended. If multiple silage cuttings are desired, planting may occur at the same time as normally recommended planting dates for grazing, however harvesting must occur when plants are still in the vegetative stage to avoid potential freeze damage or winter kill of the stand. Early planting for silage or for cover cropping has, in some years, made stands susceptible to diseases, insect pests, and lodging.

This publication provides the most up-to-date information on current adapted cool-season forage varieties. The recommendation of varieties is based on multi-location, multi-year cultivar evaluation experiments that may include trials in Georgia and other states. Table 1 includes information about the planting dates, seeding rates, and other considerations. If you have questions about a particular variety, contact your local county UF/IFAS extension agent for additional information.

Alfalfa is usually grown as a winter short-term perennial in Florida, typically used for haylage, green chopping, or hay. Alfalfa requires good management practices for establishment and maintenance. It is not tolerant to flooding or soils with high water tables and requires a soil pH of 6.5 or greater. This species is not widely cultivated in Florida because it is difficult to produce timely hay cuttings with Florida’s humid conditions. However, the cost of producing alfalfa haylage and silage has decreased in recent years, and this has made it a viable and cost-effective option as a high quality, conserved legume forage. Some new cultivars have been developed for tolerating a certain amount of grazing but are not as grazing-tolerant as other legume species, such as most of the clovers. 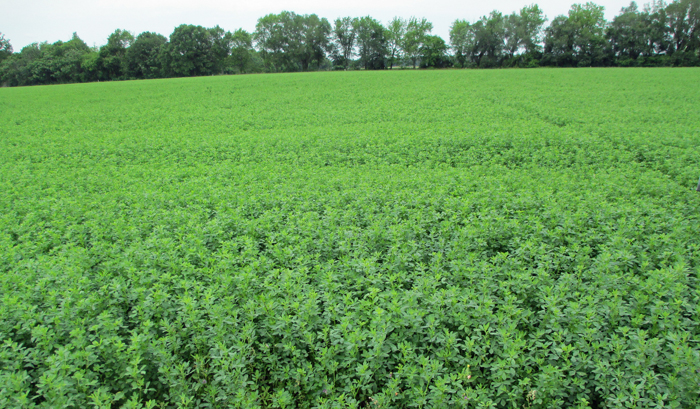 Ball clover grows on a wide range of soil types, including poorly drained soils. Although it is well adapted, it is not considered to be a highly productive forage in Florida. 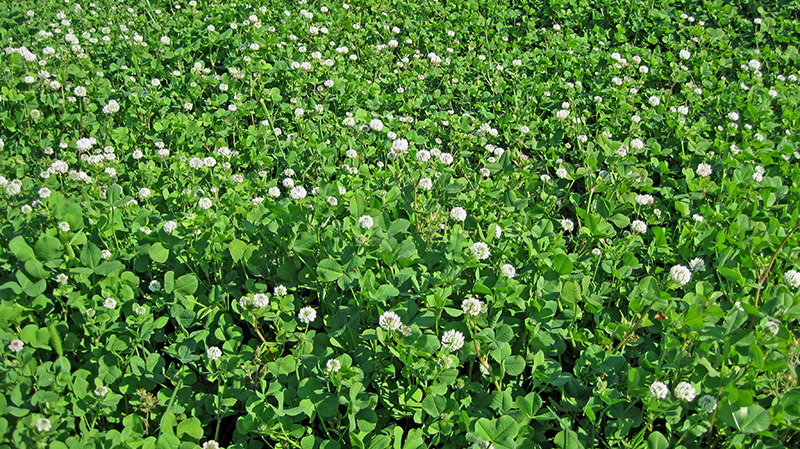 Berseem clover has low bloat potential and is well adapted to many soil types in Florida, including more alkaline and wet soils. Care should be given to the management of berseem clover when grazed. It is advisable to graze at about 10 inches and leave a 3–4 inch stubble height.

This clover is a reseeding annual adapted to fertile, well-drained soils. It has a relatively short grazing season. Crimson clover may be grown in combination with ryegrass or a small grain crop. 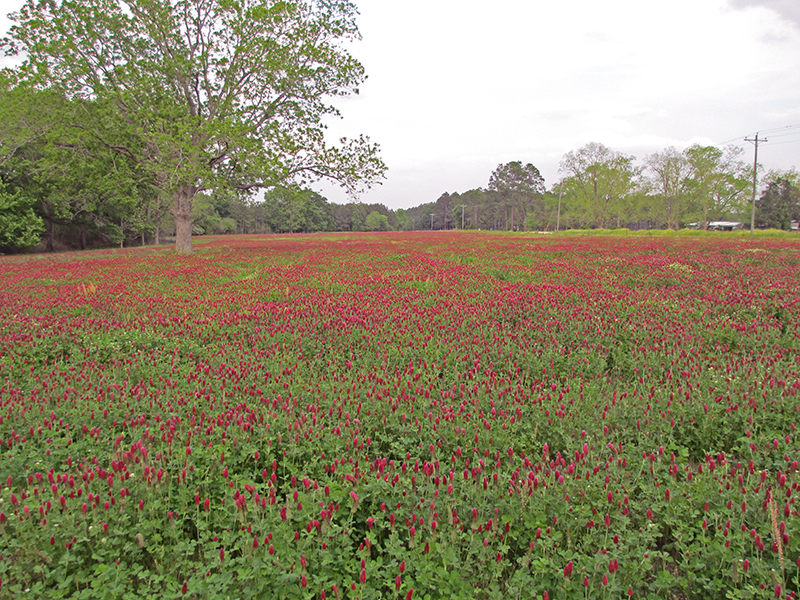 Red clover behaves as a winter annual under Florida conditions and usually does not reseed itself. It does not tolerate poorly drained soils. Red clover provides long-season forage production in North Florida.

White clover is usually a winter perennial, but may act as an annual depending on moisture conditions. It is adapted to moist soils throughout Florida and is moderately tolerant to acidity. Production and persistence of white clover can be limited by nematodes and other pests.

In general, fescue should not be planted in Florida. It does not persist as a perennial, and small grains and ryegrass are more productive as a cool-season annual. A few producers have had limited success with Ga-5, a novel endophyte- infected fescue, when planted on low, wet clay soils in northwestern Florida.

Lupine is an annual plant adapted to well-drained soils in northern and western Florida. It is an excellent cover crop. Seed supply has been low in recent years, and forage production has been limited by diseases and insects. Only sweet lupine varieties are suitable for forage.

Recommended Varieties:  Tifblue. Frost and Tifwhite are also recommended; however, commercial seed production of these lupine varieties has been limited and seed is currently unavailable.

Medics are small seeded legumes that grow on a wide range of soil types. Although they are well adapted, they are not considered to be highly productive forages in Florida.

Oat is very palatable but is susceptible to freeze injury. Oat may be planted and grazed earlier than rye. Legend 567 and Horizon 720 are new crown rust resistant varieties. In 2013, a new strain of crown rust was identified on all commercially available eastern oat varieties and symptoms ranged from mild infection to early plant senescence. We recommend planting disease-resistant varieties when available; however, in grazing systems, crown rust resistance is less critical since rust inoculum is reduced by the grazing animal. Other commercially available varieties of oat are often are very productive, although susceptible to crown rust. Early planting of susceptible varieties is not recommended. Due to label restrictions, very few fungicides are available for use in forage oats. Horizon 306 and RAM LA 99016 are excellent forage types that have winter hardiness and good grain production, however are susceptible to the new strain of crown rust that is prevalent state-wide. Susceptible oat plantings may need to be scouted for rust and treated with legal fungicides, particularly if grown for silage or grain. In some years, some varieties, such as NK-Coker 227, may be injured by Barley Yellow Dwarf Virus (BYDV), an aphid transmitted virus. Typically, oat varieties grown for grazing, which are early planted, are not sprayed with insecticides for aphid control. Grazing reduces populations of aphids but may not prevent early infection of BYVD in early planted situations where warm fall weather prevails.

This annual legume is best suited to well-drained soils with high clay content.

Rye is the small grain most widely used for winter grazing. Rye is more cold tolerant than oats and generally produces more forage than either oat or wheat. If rye is planted very early in the season, there may be a decreased stand caused by various seedling diseases. Normally, rye developed for northern states produces little forage in late fall or early winter and is usually severely damaged by leaf rust. For these reasons, only plant varieties recommended for the southeastern United States.

Ryegrass is a valuable winter and spring grazing crop for use on flatwoods soils or the heavier sandy loam soils in northwest Florida. Ryegrass may be seeded alone or with a small grain on a prepared seedbed or overseeded onto permanent grass pastures. Seeding ryegrass with a small grain crop lengthens the grazing season. (NOTE: Few differences were found between early and late variety performance in the 2016-17 season of production.)

These varieties were selected based on their recent three- year, multi-location performance. Other ryegrass varieties, such as Beefbuilder III, Big Daddy, Brigadier, Ed, Fantastic, Florlina, Fria, Graze-N-Gro, Jumbo, King, Maximus, Ocala, Passerel Plus, Rio, Surrey II, Verdure, and Winterhawk have also performed well in older regional trials. Other new varieties, like Frostproof (recently released by UF/IFAS), may be suitable but have not been adequately evaluated in Florida.

Recommended Varieties:  None at present. New varieties should be commercially available shortly. 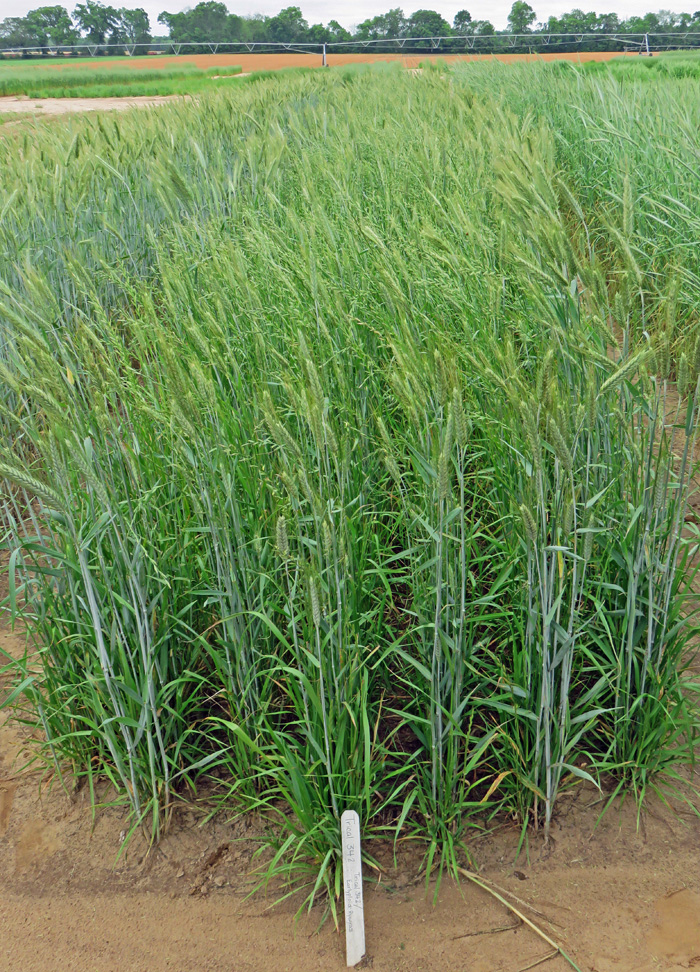 Triticale is a cross between wheat and rye. It is well adapted to the southern United States and peninsular Florida. Triticale has the forage quality of wheat and the excellent disease resistance of rye. Triticale does not respond well to close grazing and therefore is recommended for haylage or silage if grown alone. If used for grazing, consider blending with ryegrass to promote a longer growing season. It is advisable to use recommended varieties as there are triticale varieties sold in the state that are not adapted to Florida growing conditions and will not perform well.

Vetch grows best on well-drained, fertile, loamy soils. Although it is well adapted, it is not considered to be a highly productive forage in Florida.

Recommended Varieties:  AU-Early Cover, Cahaba White, Hairy, Merit, and Nova II. Commercial seed production of most vetch varieties is limited and it may be necessary to special order seed.

Wheat is similar to oat in forage yield and palatability. Wheat is less susceptible to freeze injury than oat. Wheat should not be planted for grazing before October 15 and take caution to plant only Hessian-fly-resistant varieties for grazing. 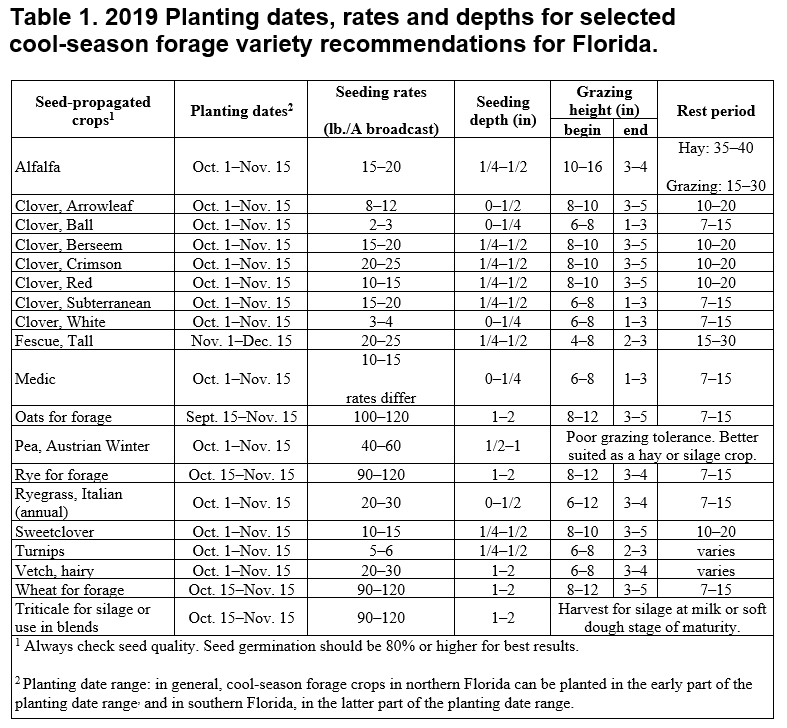