Peanut root-knot nematodes are one of the most prevalent and damaging pests in peanut production in the Southeast.  Crop rotation, use of resistant cultivars, and nematicide application are the primary strategies for managing root-knot nematodes.  (For further information on nematode management in peanuts, consult Management of Plant-Parasitic Nematodes in Florida Peanut Production).  Recently, a new root-knot nematode resistant peanut cultivar, TifNV High O/L, was released by the University of Georgia.  Research trials indicate that this high oleic cultivar has greater yield potential than previous resistant cultivars such as Tifguard and Georgia 14N.  More testing is needed in commercial fields under root-knot nematode pressure and in comparison to commonly-used nematicides such as Velum Total.  To that end, two on-farm peanut nematode trials were conducted in Florida in 2019.  One trial was conducted in Jackson County on irrigated land and another was conducted in the Suwannee Valley on non-irrigated land.  Treatments were: 1) Georgia 06G (root-knot susceptible), 2) Georgia 06G with Velum Total in-furrow at 18 oz/a, 3) TifNV, and 4) TifNV with Velum Total.  Treatments were applied in 4 or 6 row strips across the length of each field, and each treatment was repeated 4-5 times in each field. 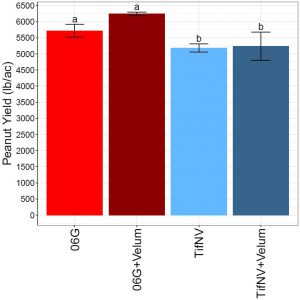 In the trial in Jackson County, root-knot nematode pressure was low and root-knot nematode abundances were not affected by cultivars or nematicide application. Peanut yield was 771 lb/acre greater for 06G than TifNV (Figure 1).  Statistically, Velum Total did not increase yield, but 06G yielded 528 lb/acre more with Velum Total than without Velum Total.  Velum Total did not influence TifNV yield.  In this trial, 06G performed better than TifNV under low root-knot nematode pressure. Caution should be shown in interpreting this single trial as TifNV was more competitive with 06G in peanut variety testing by Dr. Barry Tillman (UF peanut breeder) on irrigated land in Florida than in this trial.  Over 4 years of Florida peanut variety trials, TifNV averaged 350 lb/acre less than 06G, but approximately 700 lb/acre more than Tifguard (Peanut Variety Options for the 2019 Season).

In the Suwannee Valley Trial, root-knot nematode pressure was severe.  There were clear aboveground visual differences between cultivars with 06G exhibiting yellowing, browning, and wilting with symptoms increasing in severity later in the season (Figure 2).  In contrast, TifNV was greener and healthier than 06G (Figure 2).  There were no obvious visual differences between strips treated with or without Velum Total.  Galling on roots and pods at harvest was much greater for 06G than TifNV, which was nearly free of galling, but Velum Total did not affect root or pod galling (Figures 3 and 4). TifNV yielded 750 lb/a greater than 06G, whereas Velum Total did not improve yield.  Velum Total and other nematicides have shown value in other trials, albeit not consistently, so growers should not abandon use of nematicides based on these results.  They do suggest that resistant cultivars are a more effective option when root-knot nematode pressure is severe. 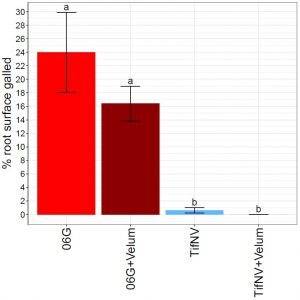 Figure 3. Suwannee Valley Trial: Root damage by root-knot nematode (galling) was greater for 06G than TifNV. There were no statistical differences in galling with or without Velum Total. 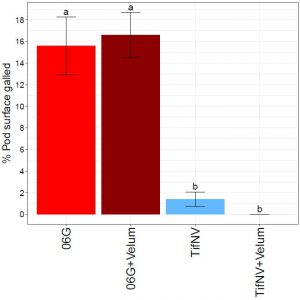 Figure 4. Suwannee Valley Trial: Pod damage by root-knot nematode (galling) was greater for 06G than TifNV. There were no statistical differences in galling with or without Velum Total.

Based on the results of these trials and other research, consider the following action items.

1. Survey and test for root-knot nematode pressure in your fields. (See the UF/IFAS EDIS on Florida peanut nematode management for more information:  Management of Plant-Parasitic Nematodes in Florida Peanut Production