As much of the world adjusts to changes in our daily life due to measures to combat COVID-19, farmers continue to do what they do – work to produce food. In the Southeast, field corn planting is underway. Nematodes can be a major yield drag in field corn. Management of plant-parasitic nematodes in corn relies on crop rotation and nematicide application. For growers that have not planted yet, now is a critical time for choosing a nematicide as products are applied at, or before planting.

Recent research at the University of Florida can help provide guidance on which nematicide may be best for your operation. In 2019, a corn nematicide field trial was conducted at the Hastings Agricultural Education Center. This trial was under severe nematode pressure, with sting nematode the primary target, but stubby-root, lesion, stunt, ring, and other nematodes were also present. This trial tested the primary nematicides currently available for field corn including the fumigant Telone II (active ingredient 1,3-Dichloroprepene), the non-fumigant granular Counter 20G (active ingredient terbufos), and the non-fumigant liquid Propulse (active nematicidal ingredient fluopyram; also includes fungicide Prothioconazole). Telone was applied 3 weeks before planting, in-row at 3 or 6 gallons per acre. Counter (6 oz/1000 row-foot) and Propulse (8 and 13.6 oz/acre) were applied in-furrow at planting. All rates were within label specifications except for Propulse at 13.6 oz/a, which was nearly double the label rate for field corn. Caution should be exercised when interpreting results from a single study, but few studies have been conducted in field corn with Propulse, which was first labelled for corn in 2019, so these initial results provide valuable information.

In the trial, plots displayed above-ground symptoms of sting nematode infestation including stunting and yellowing. Nematicide treatments clearly helped reduce these symptoms with Telone plots appearing the most healthy, followed by Counter, Propulse, and Untreated (displayed at 30 and 48 days after planting in Figures 1 and 2).

Figure 1. Corn nematicide trial in Hastings, FL at 30 days after planting. The 4-row plots show varying degrees of plant height and vigor based on nematicide treatments.

Figure 2. Corn nematicide trial in Hastings, FL at 48 days after planting. The 4-row plots show varying degrees of plant height and vigor based on nematicide treatments.

Soil nematode populations were measured at mid-season (48 days after planting) and harvest. There were minimal differences at harvest, which is common as nematicide protection typically only lasts part of the growing season, and nematode populations often rebound by the end of the year. At mid-season, Telone typically had the greatest impacts on nematode populations, but this varied somewhat by nematode. Sting nematode, the most damaging nematode in this trial, was not significantly affected by nematicides (Figure 3), but populations were numerically lower for Counter and both Telone rates. Stunt nematodes were managed best by Telone followed by counter, and Propulse (Figure 4). Stubby-root nematodes were managed best by Counter,  but Telone was not effective against these nematodes, which is similar to prior work (Figure 5). Yield is reported only for Propulse and Counter as a planting issue affected stand and yield for the other treatments. Yield was numerically greater for Counter than either rate of Propulse (Figure 6). 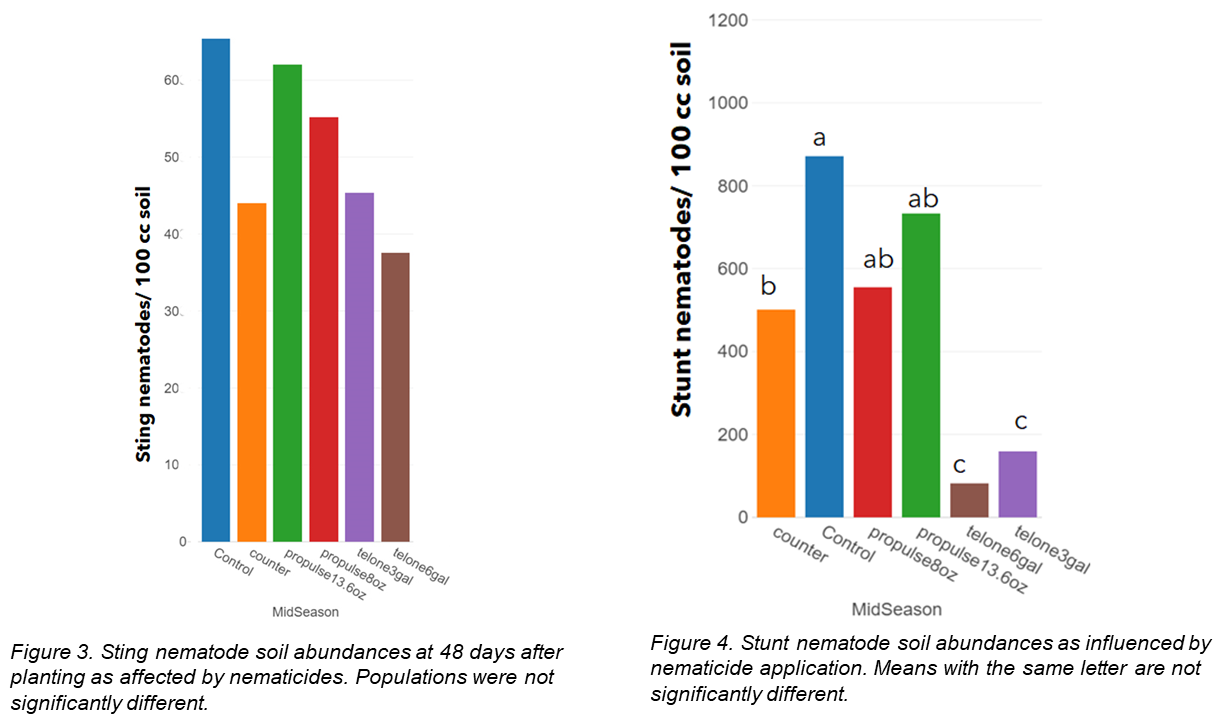 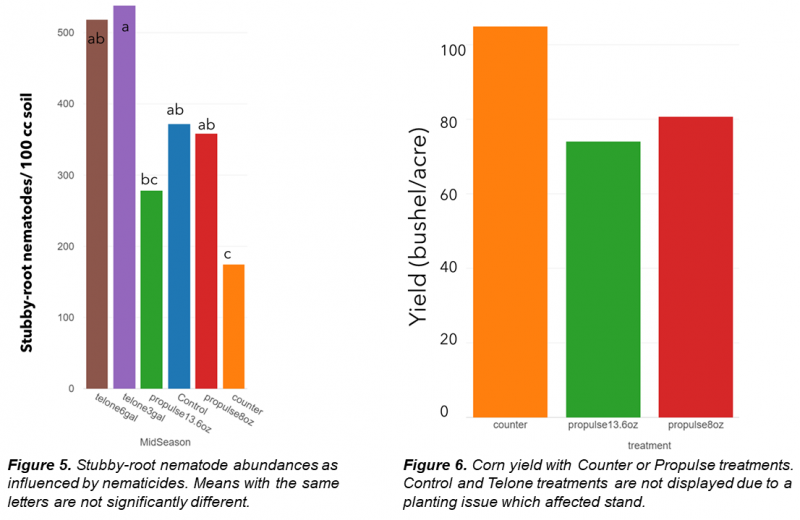 In summary, results of this trial suggest that Telone is the most effective nematicide available in field corn. This is not surprising given testing in other crops, but fumigant costs and equipment requirements mean that Telone application in field corn may not be right for every grower. This trial will be repeated and cost-value of Telone and other nematicides will be examined. Growers with high nematode pressure are mostly likely to get a return on investment from Telone application. This makes nematode sampling an important endeavor. For more information on nematode sampling see instructions on the UF/IFAS nematode assay lab website. Among the two non-fumigants, Counter provided the most efficacy, but Propulse is a flexible option for growers that are not set up for granular nematicide application. Further trials will be conducted to investigate the relative efficacy of these nematicides in field corn.