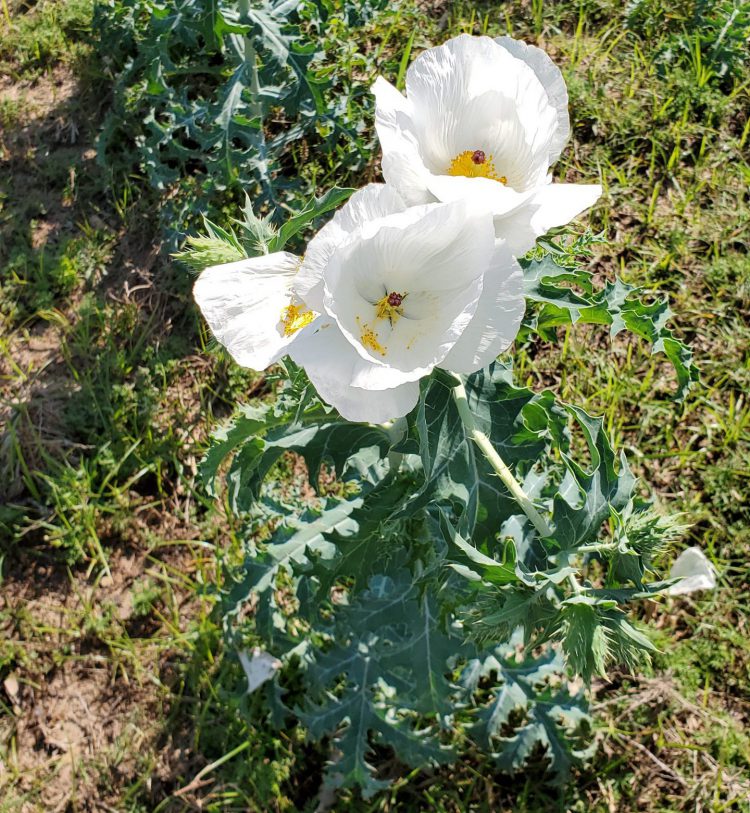 A cattle producer contacted me earlier this spring to investigate a “pretty but unusual” weed that had quickly spread over a pasture.  This  field had been planted this past fall with certified oat seed for winter forage. While definitely pretty, it was obvious that the conspicuous weeds with large, white flowers were not meant to be there.  The weed’s wicked spines and widespread nature in the pasture limited cattle grazing to only small, isolated clean areas of the field. This weed effectively eliminated a forage source the producer had been counting on to feed his cattle during winter/early spring.  New pasture weeds can often come in through hay feeding sourced from contaminated pastures.  However, when introduced through hay, one expects weeds to appear in patchy patterns where the hay was fed.  This weed came up in rows, like it was planted there, a fact made even more odd, because the oat seed came at a premium in certified bags of supposedly weed-free seed.

A little research found the weed in question to be White Prickly Poppy (Argemone albiflora), a wildflower native to the Eastern US, but uncommon in the Panhandle.  White Prickly Poppy is exceedingly hardy, thriving in our frequent dry periods and sandy soils via a vigorous taproot.  It’s also protected from grazing animals by stout spines and alkaloids. Alkaloids are organic compounds that are toxic to livestock and humans. The compounds are found in all parts of the plant, including the yellowish, milky sap that exudes from the roots and stems when broken.  This is not a weed the producer was excited about having in his pasture.

Having never observed any Prickly Poppy in the area, and having no history of the plant in any of the producer’s pastures before, a likely explanation for its presence and pattern was contaminated seed.  The rancher now had several problems.  First, he bought expensive seeds and didn’t get any extra benefit, as the cows mostly avoided the pasture.  Second, he now had a new weed problem that needed to be mowed before it set seed, sprayed to kill the existing plants, and monitored to ensure it didn’t become a problem next year.  That’s money and time spent on mowing, herbicides, and scouting that he hadn’t budgeted.  However, after this experience, both the farmer and I learned some valuable lessons related to planting forages, or any seed for that matter. 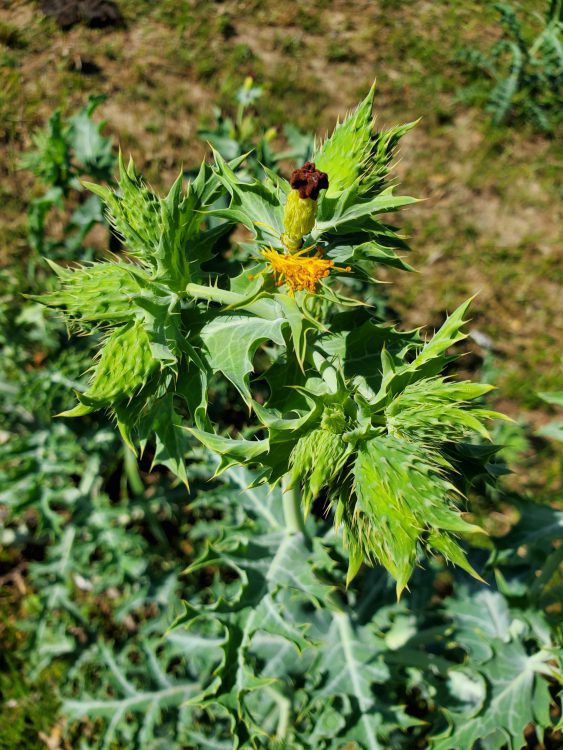 Though he didn’t notice the Prickly Poppy until it was a major problem, a good relationship between producer, seed seller, extension agent, and the obvious in-row pattern the weed exhibited enabled the seller to come to the aid of the producer.  Trusted local seed sources have the growers’ interests at heart, and will help make things right when contaminated seed is sold. Even through pretty unusual times, we’re all in this to help producers succeed together.