In fields supporting dairy operations, corn is often grown in monoculture, and sometimes double-cropped. This fits well with operations because corn is a primary feedstock, and has high nitrogen (N) requirements, so it can serve as a sink to absorb manure applications. However, corn monoculture also creates other production problems, including buildup of severe plant-parasitic nematode infestations, such as sting and stubby-root nematodes. Crop rotation, along with nematicide application, is a major means of managing these nematodes, but options are limited because grasses, a common rotation choice, also typically increase sting and stubby-root nematode populations. An ongoing research study at the University of Florida is investigating the legume sunnhemp for plant-parasitic nematode management in corn systems as an alternative to fall grasses.

To investigate this, a replicated field research trial was initiated in 2019, at the Plant Science Research and Education Unit in Citra, Florida. From August to October 2019, various crops were grown: (1) corn, (2) sorghum-sudangrass, (3) unfertilized pearl millet to serve as a check, (4) fertilized pearl millet, (5) sunnhemp harvested at termination, and (6) sunnhemp incorporated into soil at termination. Following fall crop termination, a rye cover crop was grown uniformly across the trial area. In March 2020, rye cover crop was terminated and spring corn was planted with harvest in June. Each crop was managed according to recommended practices. All spring corn received Counter 20G insecticide/nematicide in-furrow at planting. Yield for each crop was measured and soil nematode populations were monitored regularly during the study.

In general, sunnhemp and unfertilized pearl millet performed best for managing nematode abundances and increasing yield of subsequent crops. Populations of sting nematode, the most serious pest in this trial, were evaluated just before planting spring corn. Nematode control was best with harvested sunnhemp and worst with corn (Figure 1). 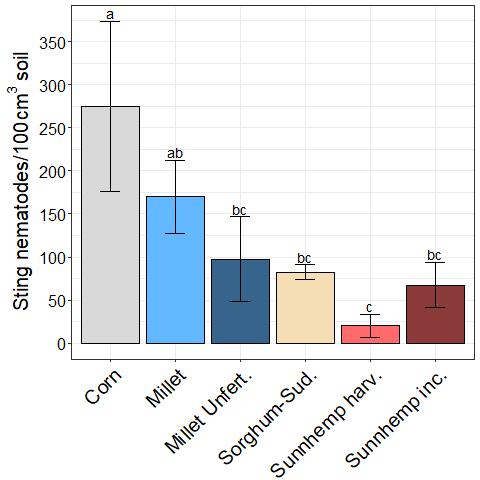 Sorghum-sudangrass increased stubby-root nematode abundances, while sunnhemp was best for control, based on evaluation of populations at fall crop termination (Figure 2). Sunnhemp and unfertilized pearl millet tended to support the lowest populations of other plant-parasitic nematodes (lesion, ring, and root-knot nematodes) in the trial as well. Sunnhemp manages nematode populations, because it is a poor host for many nematodes (they do feed and reproduce on it), and has chemical compounds that may kill nematodes. Nematode abundances may have been lower with unfertilized pearl millet, in part due to poorer crop growth, supporting fewer nematodes. Grasses would have been expected to more consistently support greater sting and stubby-root abundances than they did, but some variability is also common in nematode trials, particularly in the initial year. 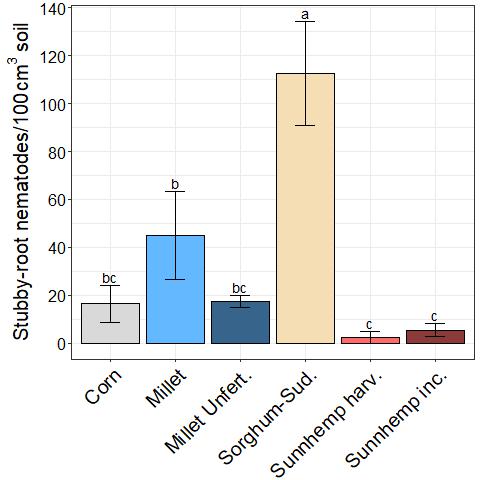 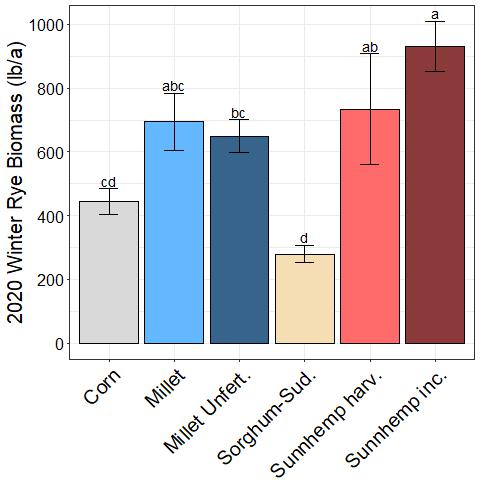 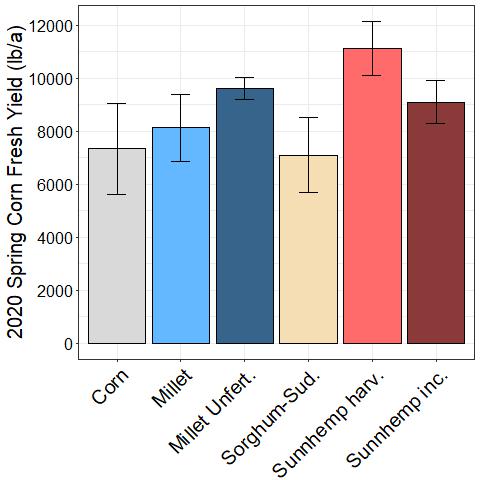 Figure 6. How spring corn yield was affected by the prior crop (corn, pearl millet fertilized/unfertilized, sorghum-sudangrass, sunnhemp harvested or incorporated).

In summary, results from this trial suggest that sunnhemp can help manage sting and stubby-root nematodes in corn-dominant systems. Grasses (millet, corn, and sorghum-sudangrass) generally increased nematode issues, but were more inconsistent than expected. This trial is being repeated at Citra to validate results, and to see if growing fall crops for a second year on the same land increases the intensity and consistency of crop effects on nematode populations. An expanded trial is also being conducted at the UF Dairy Unit, in Alachua, to examine rotation-fumigation combinations.