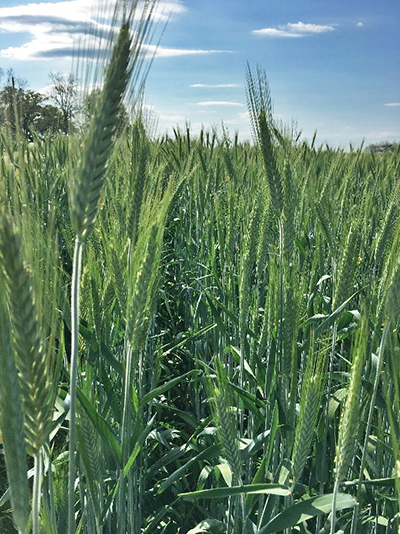 Cereal rye is a popular cool-season forage. Dairy and beef producers depend on rye for its cold tolerance whether used alone or in blends with other winter forages, such as ryegrass. In years where there is a concern about adequate moisture at planting, rye is considered to be the most drought tolerant of the cool-season grasses. When grazed early, rye forage quality is comparable to that of oat.

Reports from the various seed suppliers in the region indicate that rye seed may be in shorter supply this year because of lower seed harvest. Expect FL 401 (an early cereal rye) to be in short supply this season. FL 104 will be marketed as Kelly Grazer III. Remember that Oklahoma ryes (Elbon and Maton) tend to be later in forage production than varieties developed in Georgia and Florida. Pricing for 2020 across the state ranges from about $18-23/50lb bag.

Triticale is becoming a popular southeastern forage and silage crop. Triticale is a man-made cross between wheat and rye, so it benefits from having the disease resistance of rye, coupled with the seed and forage quality of wheat. Triticale is more cold tolerant than oat, and rarely suffers the freeze damage often associated with oat plantings. Triticale also has excellent rust and good Barley Yellow Dwarf Virus (BYDV) resistance, two diseases that often reduce oat yields.

TriCal 342 should be amply available this season and with excellent seed quality. It remains the predominant triticale grown in the SE region. FL01143 is a relatively new triticale variety and is being marketed as TriCal 1143 in the Southeastern US. FL01143 is an upright, awnless type triticale with early season growth and good tillering capacity.  It is tall in height, has early maturity, good grain yield and excellent disease resistance. It has a unique fit for wildlife plantings, because it is early and awnless, both are traits ideal as food plot components. TriCal Surge is also on the regional market. This triticale variety is a little later in forage production, excellent forage production and tillering. This triticale is very aggressive and will work very well as a grazing triticale as a  monoculture or in a blend with ryegrass. Please remember to only purchase adapted varieties since many northern triticales will not perform well under our southern growing conditions.

Expect seed prices to range from $20-23/50lbs this season with limited availability, since much of the seed has been already purchased and seed supplies may now be in short supply. 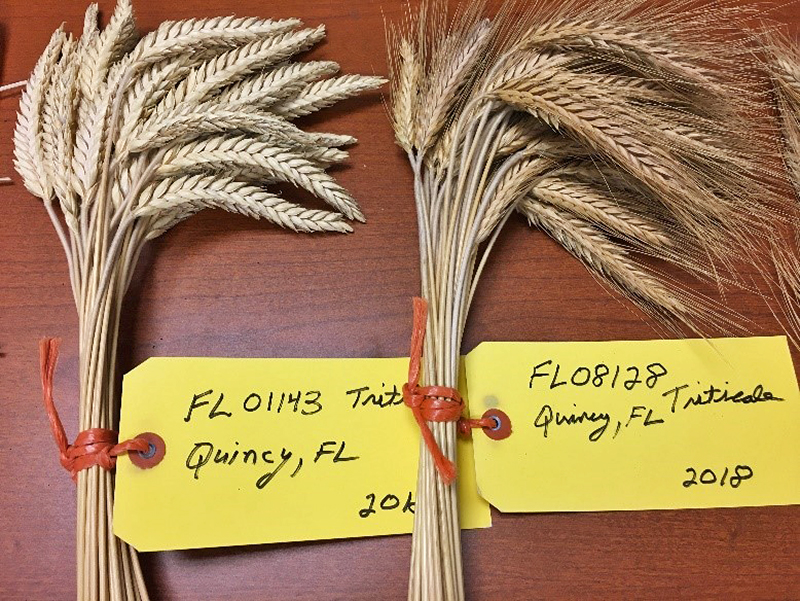 FL01143 (marketed as TriCal 1143 on left) and FL08128 (not yet on the market) are two new triticale cultivars for silage, grazing, and grain production. Credit Ann Blount, UF/IFAS

Oats are still one of the most popular cool-season forages. Seed of most recommended varieties are readily available. There are a few synonyms for FL0720 oat, which is marketed as Horizon 720 or as Sweet Caroline.  FL 0567 oat, is marketed as Legend 567 forage oat or as Buck Tale oat for the wildlife sector.

There are a few older oat varieties on the market, like Bob and Harrison, but these often lack good disease resistance or yield potential. Seed of these older varieties range from $16-22, while improved varieties cost only about $1.00-2.00 more per 50 lbs. Also be aware that sometimes oats may be sold by the bushel (32 lbs/bu) or in 2 bushel bags.

Ryegrass is a very common option for winter grazing. Seed is relatively inexpensive compared with small grains, but forage production generally occurs about a month later than grain-type forages, so this may result in the need to prolong supplementation with hay or feed commodities. Ryegrass is one of our best quality cool-season options and is often abundantly available with a large number of well-adapted varieties on the local market. Much of ryegrass seed is produced in Oregon where there are usually good growing conditions that produces ample seed supply for the annual ryegrass belt in the Southeastern U.S.

Ryegrass varieties vary in price this season from around $23-27/50 lbs. for Gulf Annual Ryegrass (Oregon-grown Common Ryegrass) to about $30/50lbs of an improved variety. If the difference in cost is only a few dollars, then with a seeding rate of 25 lbs./A, your added cost might be $1.50 to $3.50 an acre for purchasing and planting an improved ryegrass variety from the list of higher yielding types with better disease resistance.  You don’t know what you’re getting labeled as Gulf, so it is worth the investment to get a southern adapted variety. 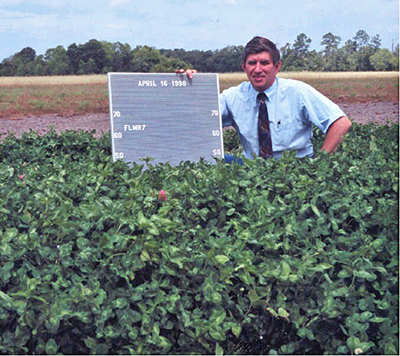 Clovers are a good additions to any winter forage program, if the legumes are adapted to your growing conditions (soil type, available moisture, etc.). Remember that legume seed requires specific inoculant (Rhizobium) to fix nitrogen for the plant. Often legume seed, particularly the clovers, are sold pre-inoculated with the bacteria. However, there are two forms of inoculation; “coated with inoculant” and “inoculated” where bacteria are adhered directly onto the seed (no coating). The also might be “raw” seed available, which would require an addition of an inoculant via a peat-based source or slurry.

Of the clover group, crimson clover is probably the most popular, and common or “Dixie” is the most prevalent variety. Seed of crimson clover this season ranges from $45/50 lbs. to $79/50 lbs. depending on whether the seed is coated, inoculated or raw. Buyer beware!

Red clover is becoming more common place since southern adapted varieties, like Southern Belle, Barduro and Red Ace are marketed locally. Again, pricing varies depending on inoculant types. $100-$144/50 lbs. depending on variety. Remember that seeding rate is about half that of crimson clover, so it is cost effective. Forage production also is later than crimson, so it may complement crimson in a mixture and may be added in with either small grains or ryegrass or a blend of all.

Another popular clover is White clover. There are several older varieties still available, like Osceola, Regalgraze, and Advantage. Newer varieties, like Ocoee, may have better disease resistance and forage production. Similar to red and crimson clovers, most white clover seed is sold either coated or inoculated, and there is some raw seed available on the local market. Seed costs may seem high (ranging from $120 to $300/50 lbs.) but since seed are very small and the seeding recommendations are low (3-4 lbs./A) the per acre investment is reasonable.

There are other winter clovers to consider, including Ball, Berseem, and Arrowleaf. These are somewhat less popular, but are adapted to many of our Florida pastures and also provide a food source for pollinating insects and as wildlife forage, in addition to our grazing livestock. Often stores will not have these seed in stock, but can special order the seed, if you are interested in experimenting with other clover types.

Lastly, other legumes include Vetch, Alfalfa, Medic and Winter pea. Most seed would have to be special ordered, but larger seeded legumes, like several of these, have better drought tolerance. Again, their success depends on soil type, available moisture, and, ultimately, as with all cool-season forage plantings, your forage management.

More information on recommended varieties for the 2020 cool-season may be furnished by your local county agent and is also available on-line by using the following link: