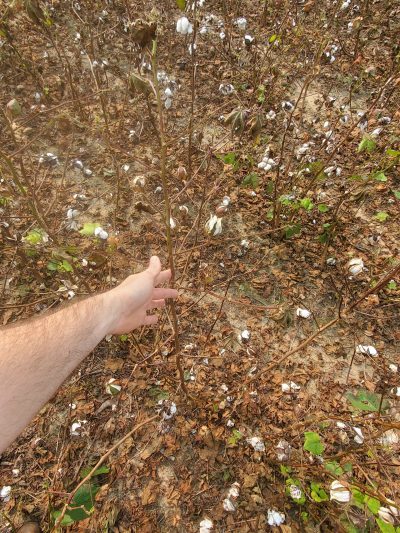 A few weeks ago, Hurricane Sally churned onshore and dumped an unrelenting amount of rain on the Florida Panhandle.  Thankfully, Calhoun, Jackson and adjoining counties were spared the lashing winds, storm surge, and widespread power outages that our neighbors to the west experienced.  For many, the biggest inconvenience experienced were roads blocked by water here and there, and local kids having to stay home from school.  But for the farming community, Sally’s rains continue to exact a devastating toll on this year’s crops.

Before Sally became a real threat, local crop growers cautiously intimated in conversations with me and other local Extension Agents that this was shaping up to be a good year.  Crop commodity prices, while never quite where we would like them to be, were on the uptrend and stable.  Regular rainfall had arrived all summer and indicated good to excellent yields.  While there was concern about Cotton Boll Rot here and there (an annual annoyance farmers have learned to deal with), local farmers were optimistic for the first time in several seasons, and after the outright devastation of Hurricane Michael in 2018 and severely depressed commodity prices in 2019, they were due some good fortune.  But it wasn’t meant to be. 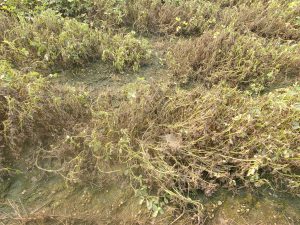 After nearly 24 hours of rain from Sally and a dreary week with more rain later, severe crop damage became apparent.  Some effects were evident as soon as the rain let up enough to take a look outside.  Low lying fields were completely inundated with several inches to feet of water.  Many peanuts that were at or near maturity now had to sit in standing water or saturated mud for days, over a week in some cases, until fields dried enough for tractors to enter safely to dig.  Peanuts don’t like wet feet and they like to be harvested on time; a late harvest in wet conditions is almost certain to negatively affect yield in a big way.  Reports are already in of peanut yields being significantly reduced, as well as a lower quality grade (lower grade peanuts bring less money at the buying points) from sitting in water for days to weeks and the rampant disease pressure that causes. 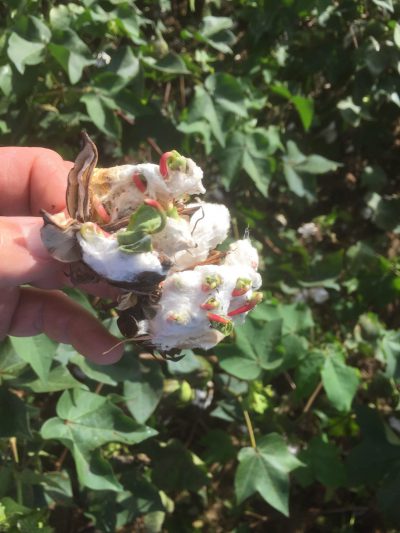 Cotton seed sprouting in the boll after a week of saturated conditions. Photo courtesy of Mark Peacock.

The cotton crop fared even worse.  A majority of bolls (~60) in cotton fields, especially those highest yielding bolls in the lower canopy, were already open at the time of landfall and very vulnerable.  The prolonged wet conditions caused severe boll rot and associated hardlock (a condition where the boll’s fibers fail to fluff out and remain “hard” in roughly the shape of an orange slice), leading to both unharvestable or unmarketable bolls.  With the unprecedentedly wet weather, the seeds inside cotton bolls also began sprouting.  Seed sprout eliminates the seed credit growers get at the gin through cottonseed sale to processors, which generally offset ginning costs.  The final toll taken by Sally on cotton was the shredding of open bolls by hard falling, heavy rain and strong winds.  More severe in fields that had already been defoliated, this shredding resulted in stringy fiber hanging from stalks, or even worse, otherwise good bolls knocked onto the ground.  Significant cotton losses in local fields have been reported prior to harvest, and will likely increase as harvest ramps up. 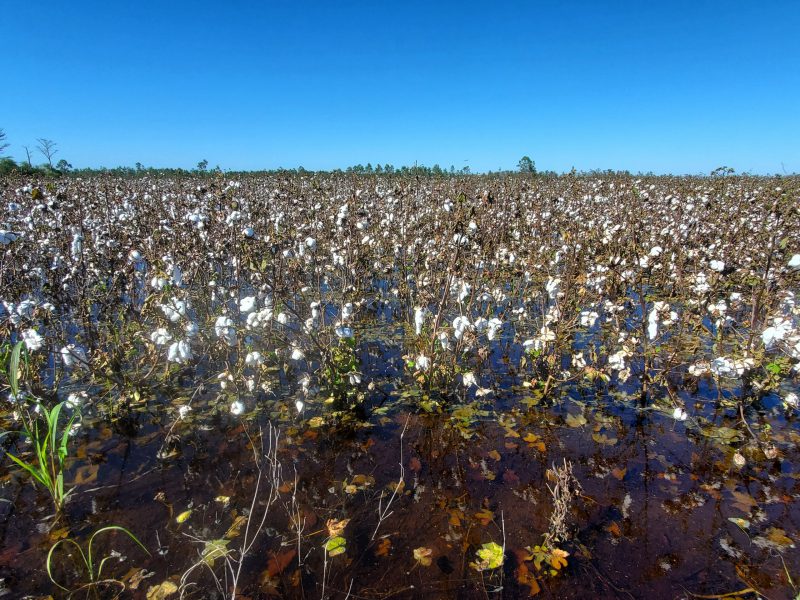 Is there a silver lining in any of Sally’s devastation?

In the short term, not really.  Low yields of low grading crops do not lead to positive outcomes in the present.  However, Sally is a good reminder to us of the importance of carrying crop insurance.  Those that chose to “farm on faith” this season were potentially taught a painful lesson.  Crop insurance is not a profitable game for producers, but it is a hedge that’s worth the cost against catastrophic losses like those incurred by Michael in 2018 and Sally this year.  Also, Sally has caused some growers I have spoken with to reconsider renting marginal, low-lying fields.  The question of whether the potential benefits of farming a few more acres outweighs the costs of losing a crop to flooding in a low-lying field should be asked going forward.

Though yields won’t be what growers hoped for and crop insurance will be called upon in many cases to get us through to next year, our local farming community is a resilient bunch, remaining positive through the storm.  Peanut pickers are working hard, cotton fields are being defoliated and what remains is being harvested and producers are already looking toward next year.  That’s the beauty of growing plants for a living, the promise of a new crop and another year is just around the corner.  Thank a farmer today, and if you have any questions about Sally disaster relief for ag producers or any other agronomic questions, please contact your local UF/IFAS County Extension Office.