Cold hardy citrus is targeted by a various number of pests including scales, mites, and leafminers. In the absence of Asian citrus psyllid (only present in residential areas), citrus leafminer is the most damaging pest of cold hardy citrus cultivated in the Florida Panhandle. Citrus leafminer feeds within the leaves creating tunneling damage called ‘mines’. Leafminer damage are mostly an issue for young citrus as it can delay citrus growth and the mines are also an entry for pathogen including spores of the citrus canker pathogen.

The most common treatment against citrus leafminer are preventive application of systemic insecticides (neonicotinoids and diamides) during the two flushing seasons (spring and fall). This management strategy has proven to be highly efficient in reducing leafminer population; however, these regular insecticide applications have negative effects on beneficial insects including pollinators, parasitoids and predators. A decrease of natural enemies in citrus grove is likely to lead to a secondary outbreak where a pest previously controlled by natural enemies has now less parasitoids and predators. This is particularly the case for spider mites and scale insects that may increase in density following insecticidal sprays. The recent outbreak of Florida red scale observed last fall in several citrus orchards in the panhandle are most likely the consequence of over-spraying. 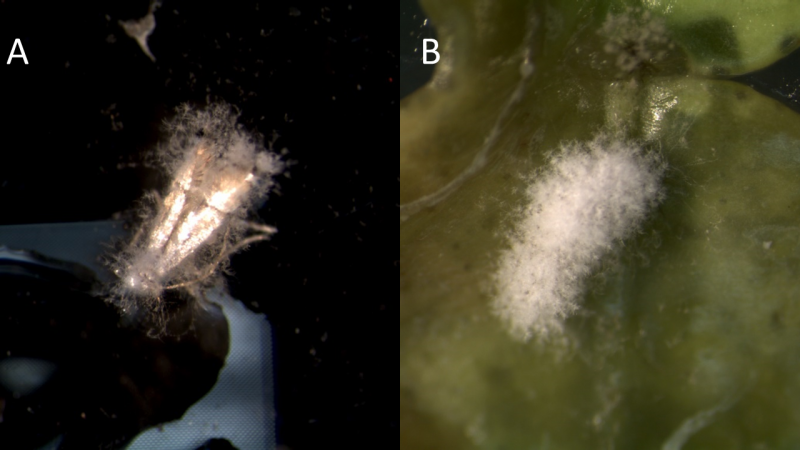 Beside insecticide treatments, other control methods exist against citrus pests. Entomopathogenic fungi (EPF) are the only insect pathogen that is currently used as biological control against citrus pests. In 2005, a strain of EPF, Cordyceps (= Isaria) fumosorosea, was discovered in Florida infecting an Asian citrus psyllid. Also another Apoka strain 97 of C. fumosorosea, contained in the commercially available EPF product, PFR-97 20% WDG has proved to be highly effective against several commercially important pests of citrus including the brown citrus aphid, Asian citrus psyllid, glassy wing sharpshooter, and citrus root weevil, Diaprepes abbreviatus. This EPF product is also efficient against spider mites and laboratory and field trials suggest that it could also control citrus leafminers (Fig. 1 above). Efficacy of EPF depends on the target pest, but the virulence can be particularly high; for instance, some strains of the EPF C. fumosorosea can kill > 90% of Asian citrus psyllid adults or nymphs four days after application (Fig. 2 below). The fact that EPF have a large range of hosts make them particularly interesting to use, as they can control several pests without the use of an additional broad-range insecticide. Natural enemies are compatible and less susceptible to EPF than insect pests. Similarly, there is no evidence that EPF used against citrus pests are deleterious to pollinators. 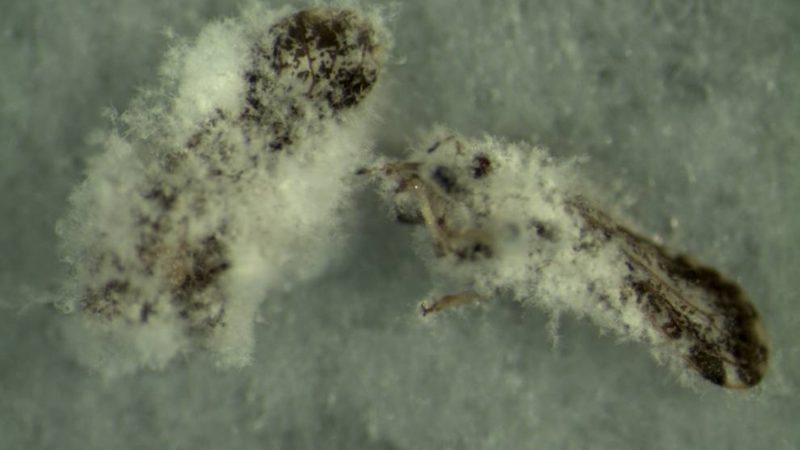 EPF for citrus pest are sold under the brands PFR-97 20% WDG and Ancora. EPF can be applied by spraying the plants directly with a suspension mixed with a nonionic surfactant. Interestingly C. fumosorosea is compatible with petroleum oil treatments that include brands such as Orchex, Sun Pure, Conoco Blend -1, Conoco Blend -2, or JMS. Horticultural oils provide control for pests including leafminers, scales and rust mites. Therefore, a program that combines EPF with petroleum oil could potentially cover most pests encountered in citrus in North Florida.

Very soon, another way to use EPF will be by using spore dispensers (Fig. 3 below). These dispensers have been developed for C. fumosorosea against Asian citrus psyllids and proved highly effective in Texas and South Florida. These dispensers will be an interesting tool for residential areas or for small groves, where owners may not have efficient sprayers. They could also be hung on the borders of citrus groves to prevent the arrival of Asian citrus psyllids. 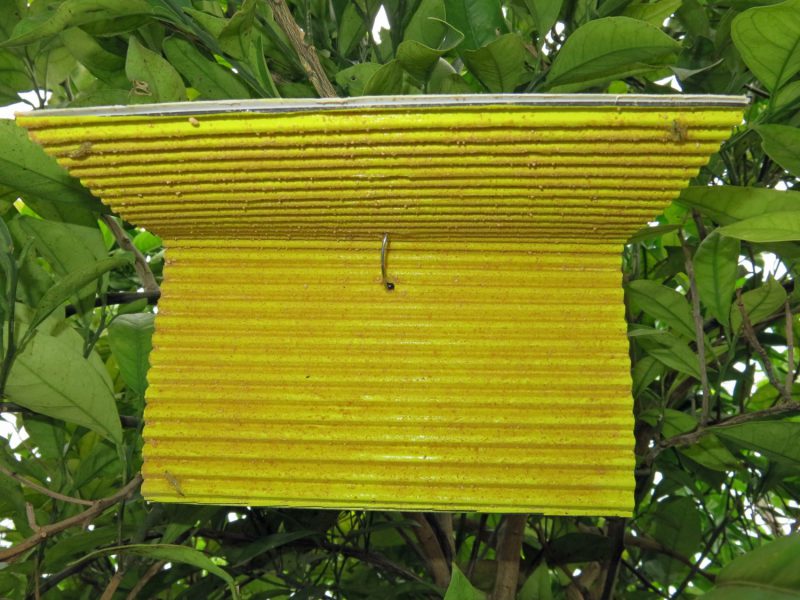