First, Velum (Bayer Cropscience) is available for row crops and horticulture crops in the Southeast. Velum has the active ingredient fluopyram, which has activity against both nematodes and fungal pathogens. In row crops, it replaces Velum Total, which had both imidacloprid and fluopyram. Velum is labelled for corn, cotton, and peanut as well as most horticulture crops at a maximum rate of 6.84 fluid ounces/acre. Velum is more concentrated than Velum Total, so the amount of active ingredient applied is the same despite a lower rate than Velum Total. In horticulture crops, Velum is a rebranding of Velum Prime, but the two products are identical. Application methods are retained from prior products. Velum Total and Velum Prime remain legal to apply. Another fluopyram product, Propulse, retains labels for corn (in-furrow at 8 fluid ounces/acre) and peanut (in-furrow or foliar at pegging at 13.6 fluid ounces/acre). Propulse also contains the fungicide prothioconazole. Fluopyram products have efficacy against nematodes. Use the links at the bottom of the article to access previously published articles discussing efficacy in peanut, corn, and cotton.

A second nematicide product is Averland FC (Vive Crop Protection), which contains the active ingredient abamectin. It is labelled for nematodes on corn as an in-furrow at a maximum rate of 6 fluid ounces/acre. Abamectin is also an insecticide and Averland FC is labelled for that purpose in other crops. Abamectin seed treatments have been available for many years and can have some efficacy. In-furrow Averland FC or other abamectin products have not been tested extensively in row crops, so no recommendations about this specific product are given at this time. Abamectin binds tightly to soil, limiting its distribution in soil. Distribution is important for efficacy, which is an additional reason testing in-furrow methods before making recommendations is important. Averland FC is labelled for “suppression” of nematodes, which is a lesser standard of management than a nematicide labelled for “control” of nematodes. 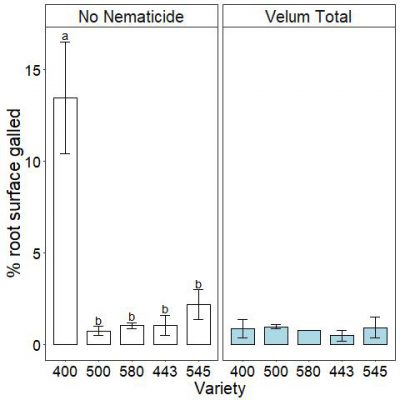 Figure 2. On-farm cotton Phytogen variety trial in Jackson County 2020 with and without Velum Total in-furrow nematicide. Root galling is damage from southern root-knot nematode. Phytogen 400 has partial resistance, while the other varieties are reported to have a double-gene root-knot nematode resistance background.

Finally, new cotton cultivars with reported resistance to both southern root-knot nematode and reniform nematode are available for the 2021 growing season. Those two nematodes are the main nematode threats to cotton in Florida and the Southeast. Resistance to reniform nematode has not been available in commercial cultivars in the past, so it would be a major tool for nematode management. Phytogen 443 (mid maturity), Phytogen 332 (early-mid maturity), and Deltapine 2141NR (mid-full maturity) are varieties with resistance to both nematodes and intended for use in the Southeast. 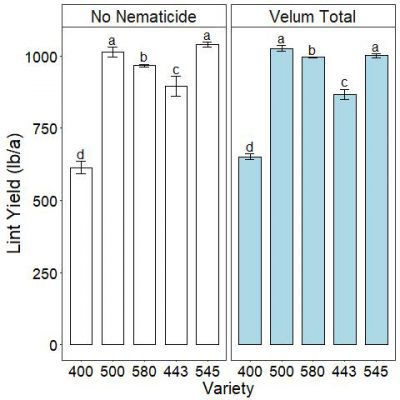 Figure 3. Lint yield from on-farm cotton Phytogen variety trial in Jackson County 2020 with and without Velum Total in-furrow nematicide. Root galling is damage from southern root-knot nematode. Phytogen 400 has partial resistance, while the other varieties are reported have a double-gene root-knot nematode resistance background.

For more information on nematode management in cotton, peanut and corn, use the following publication links, or contact Zane Grabau.