Perennial peanut production is on the rise throughout the Panhandle.  In Calhoun County alone, we’ve ascended from a small specialty industry, with a farm here and there growing the legume, to around 1,000 acres in production.  This increase in acreage is due to perennial peanut’s versatility as a forage and hay crop. It is capable of providing cow/calf and equine grazing operations with a forage nutritional value well in excess of what our traditional pasture grasses offer, and gives hay producers a much higher value product to sell versus traditional bahia/bermudagrass hay.  Perennial Peanut also offers producers an easygoing nature, requiring “relatively”  little fertilizer inputs, due to its nitrogen fixing properties as a legume, and limited insect pest or disease issues.  Where producers generally run into problems with perennial peanut, however, is managing weeds.  Though weed management in perennial peanut is no doubt a major challenge, ensuring a timely dormant season or early-spring post emergence application happens can negate many weed problems producers face later in the year. 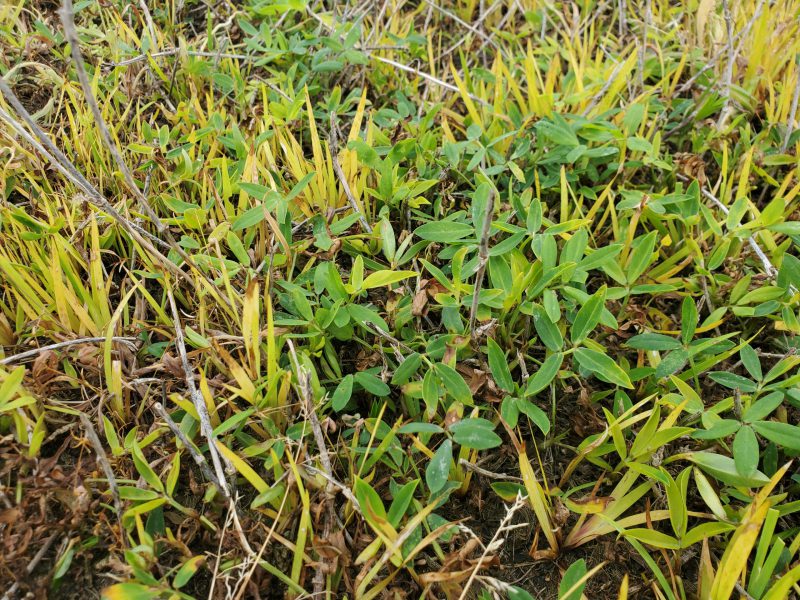 A major limiting factor for weed management in perennial peanut is the fact that there are only five herbicide chemistries labeled for use in the crop in Florida:  clethodim, hexazinone, imazapic, 2,4D amine, and glyphosate (Weed Control in Perennial Peanut).  A large number of my total clientele consultations involving pasture weeds and herbicide selection deal directly with cleaning up weed infested perennial peanut fields.  Almost all of these calls involve a weed issue that becomes evident in mid-summer, as the weedy species reaches maturity. Problematic weeds either rise tall above the perennial peanut groundcover, or displace the peanut altogether in areas where the legume is thinner for various reasons (wet areas, stand not established yet, shady areas, etc.).  Unfortunately, these established mature weeds are much more difficult to control than small, recently sprouted weeds.  Because of this, a broad-spectrum, early post-emergent (Feb-Mar) herbicide application with a combination of Roundup and 2,4-D amine at labeled rates (generally 1 pint or 16 ounces of each herbicide) applied soon after these warm season weeds emerge is where producers should focus their time, money, and attention for a perennial peanut herbicide program.  Remember: While herbicides are often necessary, the first defense against weeds is a healthy perennial peanut stand and this includes maintaining fertility! Though Perennial Peanut can fix its own nitrogen, if soil pH is low, lime may be required and periodic fertilizer applications of Potassium (K), Magnesium (Mg), and Sulfur (S) are often necessary to promote a vigorous groundcover. Micronutrients, like Boron, Manganese and Molybdenum, are also critical for functional nitrogen fixation (UF/IFAS Standardized Fertilization Recommendations for Agronomic Crops). 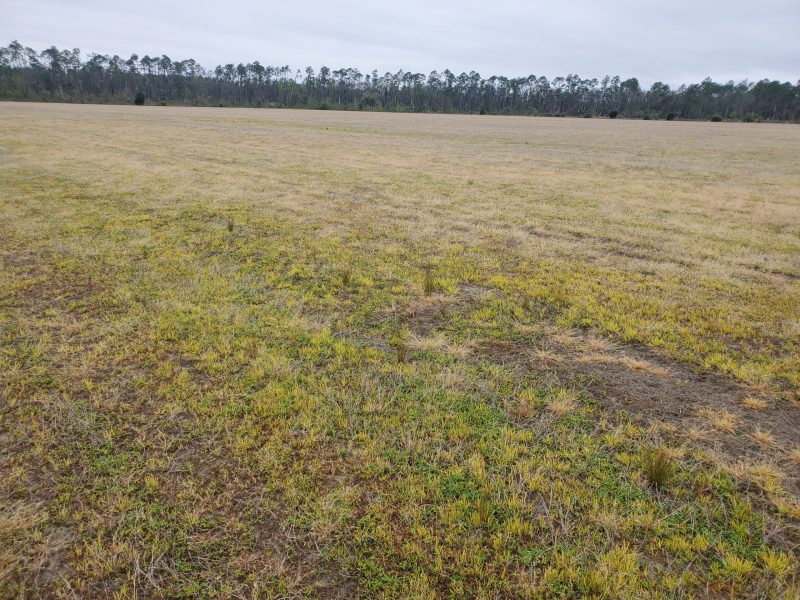 After making the recommendation to apply glyphosate and 2,4-D amine during early warm season weed emergence, it isn’t at all uncommon for newer growers to balk at applying “Roundup”, the brand name for the active ingredient glyphosate, over the top of their also freshly emerging perennial peanut plants.  However, there is a large amount of research backing this recommendation and many established producers have been safely applying these herbicides with success for years.  In some cases, producers may notice a general yellowing of leaves or stunting of the emerging perennial peanut, but in many other cases, little to no injury at all is observed and yield is not affected.  Almost every serious weed problem I have observed could have been solved or at least lessened by a timely February or March glyphosate + 2,4-D amine application.

Other than the sheer effectiveness of the early season spray, there are several other reasons to make sure this application happens.  First, relative to the other labeled herbicides available, glyphosate and 2,4-D are inexpensive and, if used properly and under the correct weather conditions (wind speeds <10 mph), have much less potential for injury to plants adjacent to the pasture.   These herbicides lack residual soil activity (unlike hexazinone, which is extremely toxic through root contact to Oak and other hardwoods, and impazapic, which can injure some non-target species).  Also, all the herbicides labelled for use in perennial peanut have grazing and hay cutting restrictions, from 30-58 days following application.  This is not a problem during the spring as hay cutting or grazing will not begin on perennial peanut pastures until the stand fully develops in summer.  However, weather conditions in Florida during hay cutting season are fickle, with few ideal days to get the job done.  Extra herbicide applications during the summer may hamper hay cutting due to restrictions on feeding treated forage. It is always best that the producer starts the year with a clean stand to avoid these issues altogether.

A little due diligence with making a timely, early post-emergence broad spectrum herbicide application can go an awful long way to making sure perennial peanut growers have a mostly weed-free and profitable year. For more information on weed control and other perennial peanut related topics, please contact your local UF/IFAS Extension Office!