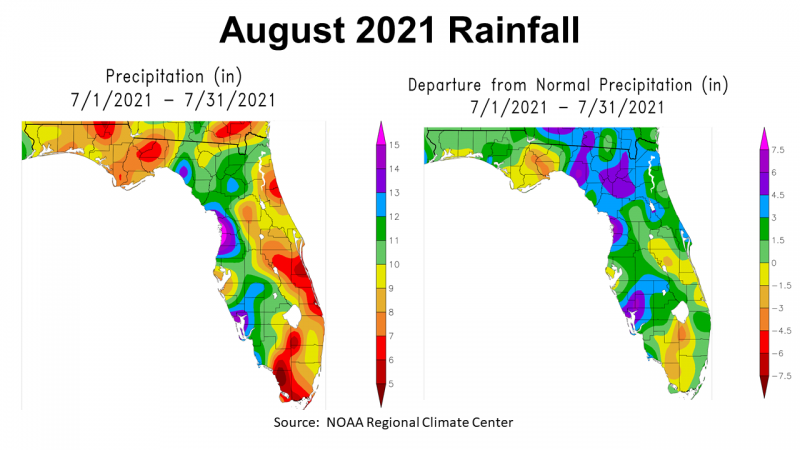 August was yet another wet month this growing season for much of the Panhandle, but not for every county.  The map on the left shows that the rainfall totals for August 2021 ranged from 6″ to 10″, in this region.  The map to the right compares the rainfall to historic average, so you can see that parts of Gadsden, Leon, Liberty, Gulf, and Franklin Counties were below normal for the month (yellow) with a pocket that was at least -1.5″ to -3″ below normal (tan & brown). 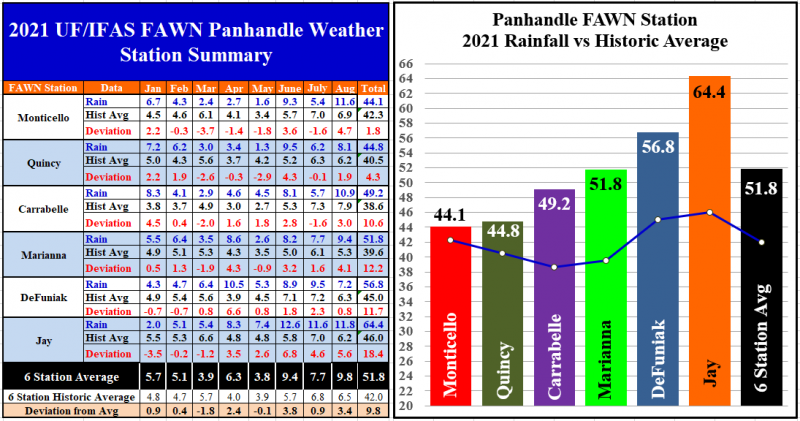 The six Florida Automated Weather Network (FAWN) stations showed more specific variation across the Panhandle.  The wettest location in August was in Jay, where 11.8″ was recorded, which was 5.6″ above average, due in part to the outer-bands of Hurricane Ida.  The station at Monticello recorded, 11.6″, 4.7″ above normal at that location.  At the driest location in De Funiak Springs, 7.2″ was recorded, but this was 2.3″ above average.  All six stations were well above average last month.  The average for all six stations was 9.8″, which was 3.4″ above historic average for August.

Through eight months, all six stations are now above historic average through August.  The station in Jay has recorded 64.4″, which was 18.4″ above average.  This is only 0.2″ less than the annual historic average at this site, so the Jay station has received a normal year’s worth of rain with 4 months still remaining!  The direst location in 2021 has been at Monticello, but after heavy August rains this location is now 4.7″ above historic average through eight months.  The January through August rainfall average for all six stations in the Panhandle was 51.8″, which was 9.8″ higher than normal.  Clearly a wet growing season in 2021, especially for the counties in the Central Time Zone. 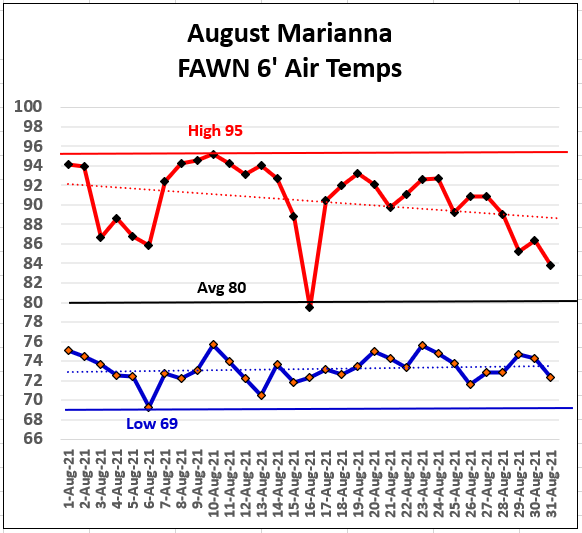 August was another hot month, but not to the extremes of the western states in the US.  At the Marianna FAWN Station there was only one day, August 10th, with a high temperature over 95°.  The low for the months was 69° on August 6th.  The average for the month was 80°. 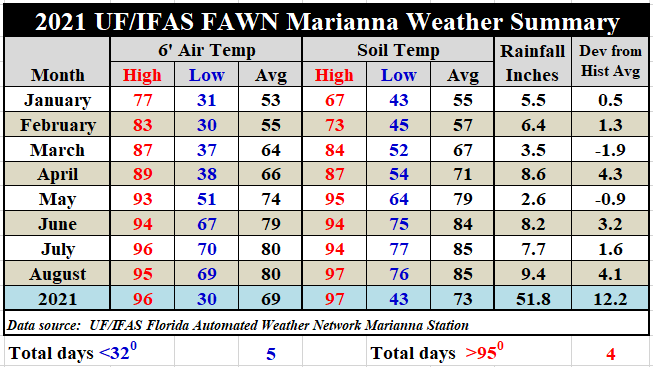 To review the daily high and low temperatures and rainfall data from the Marianna FAWN station, and the monthly rainfall totals from all six FAWN stations in the Panhandle, use the following link:  Jan-Aug 2021 Jackson County Weather Summary

The Climate Prediction Center’s (CPC) outlook for September was released recently.  The CPC is expecting the wetter than normal trend to continue in September for the western counties in the Panhandle, but the rest of Florida is expected to have near normal rainfall.  Their temperature outlook provides little guidance except in the very western edge of the Panhandle, where cooler than normal temperatures are expected.

As you compare the Outlook made August 31 for September to the October through December Outlook created August 19, you can see a dramatic shift in the forecast.  This outlook indicates that warmer temperatures and drier than normal rainfall are expected to close out 2021.  The last quarter outlook is primarily based on a shift from ENSO Neutral to La Niña that is expected later this fall.

The ENSO phase was still neutral at the end of August, but the CPC is still expected a return of La Niña in the next few months.

ENSO–neutral conditions are present.  Equatorial sea surface temperatures are near–to–below average across most of the Pacific Ocean.  ENSO–neutral is favored for the remainder of summer (~60% through September), with La Niña possibly emerging during the fall and lasting through the 2021–22 winter (~70% chance during November–January).
Climate Prediction Center

Farmers should have good weather for harvest this fall.  Based on the September CPC forecast, it looks like hay production may remain challenging this month, but may improve later in the fall.  Baleage may still be the best option in September. If you currently have over-mature forage on hay fields and can’t make baleage, you may have to graze or bush-hog to improve quality for fall harvest.  Fungal disease protection will remain critical late in the season for peanuts, cotton, and soybeans.  The CPC October-December Outlook may be ideal for warm season crop harvest, but could more challenging for cool season crop planting.  Take advantage of available soil moisture when planting, or wait for the next front.  It may also be advisable to plant cool-season crops in fields with better moisture holding capacity.  It does seem strange to talk about dry soils in the midst of such a wet growing season, but we can all remember how dry it can get in the fall when the early cold fronts keep dodging north and skip over the Panhandle.  The CPC Outlook forecasts do look favorable for crop and pasture production, but all of this could rapidly change with a Tropical Storm or Hurricane.  I hope and pray the Panhandle is done with major storms for the year.  With so much rain this year, nutrient leaching and fungal diseases are sure to take their toll on final crop yields in 2021.  However, a dry fall could help salvage a decent crop at the end of a really wet growing season.    The fall hay cutting may  be the only high quality hay harvested this year, so you may want to identify it in storage for feeding cows and heifers after calving.