Potato and sweetpotato are important crops in Florida, unfortunately these root crops are susceptible to damage from nematodes, particularly root-knot nematodes (Figure 1). Along with crop rotation and use of resistant cultivars (for sweetpotatoes), nematicide application is a major method used for managing root-knot nematodes in root crops. This article summarizes efficacy of some current and forthcoming nematicides for managing root-knot nematodes, based on research trials conducted over three years at the North Florida Research and Education Center – Suwannee Valley, near Live Oak, Florida.

Trials were conducted in 2018, 2019, and 2020 on replicated (6 reps) small plots that were 2 beds wide and 30 feet long. In the trials, the liquid, non-fumigant nematicides tested included Vydate L (active ingredient oxamyl), Velum (a.i. fluopyram), and Salibro (a.i. fluazaindolizine). The fumigant Telone II (active ingredient 1,3-Dichloropropene) was also tested. Vydate L, Velum, and Telone II are currently labelled while Salibro is a new product expected to be released in the coming months. Treatment details including rates, product combinations and application methods are summarized in Table 1. In 2018, the cultivar Covington was planted, as it the most common cultivar in North Florida. Covington is also moderately-resistant to southern root-knot nematode. In 2019 and 2020, root-knot nematode-susceptible cultivars (Beauregard and Orleans, respectively) were planted to evaluate nematicides under severe nematode pressure. Soil root-knot nematode counts at mid-season and harvest, as well as total and marketable yield—based on USDA grading system—are reported in the following charts. 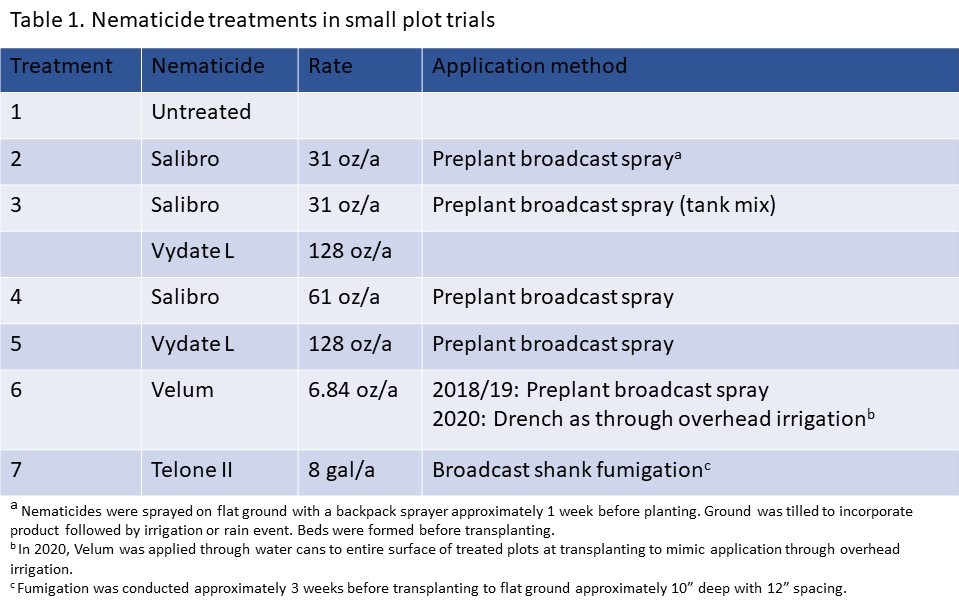 Nematode assessments, such as soil counts, are useful to help confirm that in-season yield benefits of a product are due to nematode control rather than other factors. Mid-season counts are often the most important timing for this, as nematode control by nematicides is often temporary, although early-season protection is often sufficient to improve yield. Soil counts at harvest are often more important for showing if a product will have any carryover benefit in managing nematodes for a subsequent crop. In the 2018 trials at Live Oak, nematicides did not affect mid-season root-knot nematode counts, which were low for all treatments when the moderately-resistant ‘Covington‘ cultivar was used (Figure 1). In 2019, treatments with Vydate L, Salibro at 61 oz/a, or Telone II reduced mid-season nematode counts relative to untreated, whereas in 2020 only Telone II was effective.

Figure 1. Midseason root-knot nematode soil counts for trials in 2018, 2019, and 2020. Values that share a letter are not significantly different.

By harvest in 2018, nematode counts had increased and most treatments, except Velum, tended to have lower counts that the untreated control (Figure 2). In 2019 and 2020, when susceptible cultivars were grown, counts also increased by harvest and there were minimal differences among treatments, suggesting control did not last until the end of the growing season. Nematode counts showed that most of products were impacting root-knot nematodes, but that protection, when a susceptible cultivar is grown, does not last the entire season and is unlikely to have carryover benefit for a subsequent crop.

Figure 2. Harvest root-knot nematodes count in trials from 2018-2020. Values that share a letter are not significantly different.

Figure 3. Total sweetpotato yield (marketable and unmarketable) in trials conducted 2018-2020. Values with the same letter are not significantly different.

Acknowledgement: This research project was supported by Corteva Agriscience and the FINDMe project (USDA NIFA SCRI #2019-51181-30018).