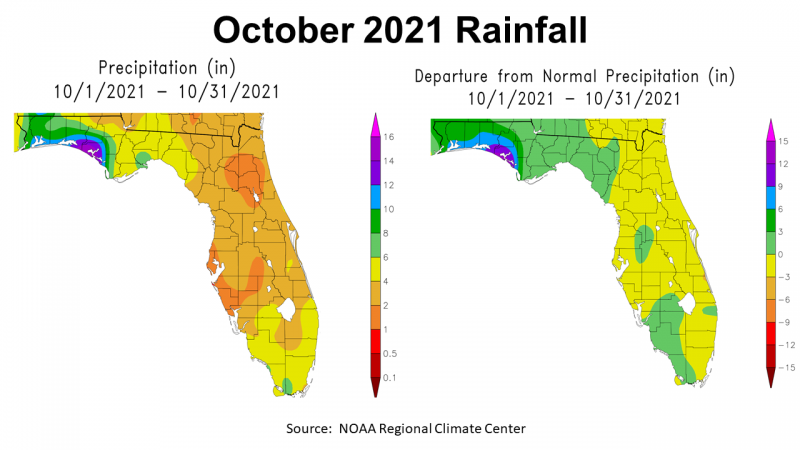 October was yet another month in 2021 with above average rainfall across the Panhandle, but it was also much cooler than previous months.  The map above to the left shows the estimated rainfall totals for all of Florida in October.  Much of the Panhandle received at least 4-6″ (yellow), while some areas received 6-8″ light green, 8-10″ (green), with in portions of Bay and Walton Counties more than 9″ (purple).  The map to the right shows the deviation from historic average in October.  The entire Panhandle was above average, but the western counties were 3 to 12″ above average in October.

The six University of Florida’s Florida Automatic Weather Network (FAWN) stations across the Panhandle showed limited variation for rainfall in October.  The highest rainfall total was collected at the station in Jay with 5.4″, which was 2.1″ above average.  The driest location was DeFuniak, with 4.1″ in October,  but event that was 0.4″ above historic average.  The average for all six stations was 4.6″, and was 1.2″ higher than normal for October.

From January through October the highest rainfall total was 77.1″ at the Jay station.  That station was a whopping 22.3″ above historic average with two months still to go in 2021.  Conversely, the station near Monticello has only recorded 52.9″ thus far in 2021, which was only 1.6″ above average.  In the chart above you can really see the stair step variation as you move from east to west through the Panhandle this year.  The average for all six station so far is 61.9″, which was 11.1″ above normal for the region.  The FAWN Station at Marianna recorded measurable rainfall on 108 of 304 days thus far in 2021. 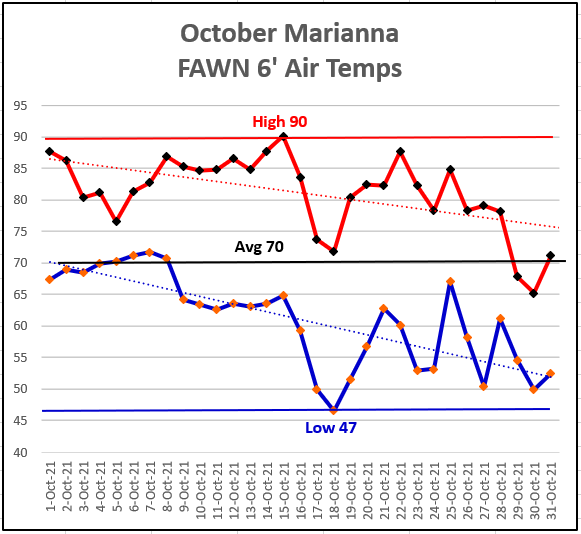 October had a pretty wide range of temperatures (43°) as it cooled off significantly just in time for the Sunbelt Ag Expo.  The high of 90° came on October 15th, with the low of 47° just thee mornings later on October 18th.  The trend lines show how drastically the low temperatures dropped, and how the high temperatures also cooled, but not as significantly.  I know everyone at the Expo and back home harvesting crops and hay enjoyed the fall feel in the air last month. 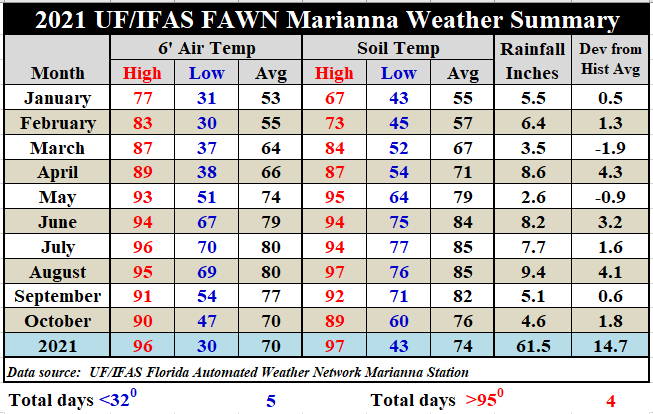 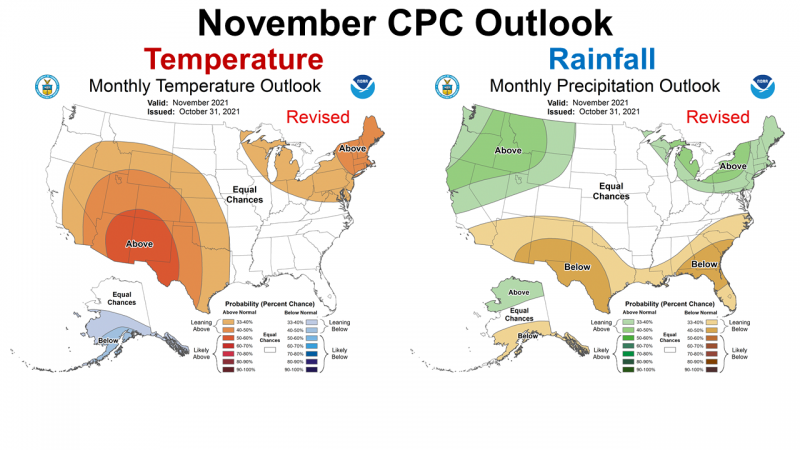 The Climate Prediction Center (CPC) released a revised climate outlook for November 2021 on October 31st.  While the CPC made no temperature forecast (equal chances of above or below average) they are expecting La Niña to really affect precipitation this month.  Expect drier than normal rainfall in November.

The CPC has released a La Niña Advisory, which means they have confirmed the return for a second straight winter of this ENSO phase.  Their most recent summary is as follows: 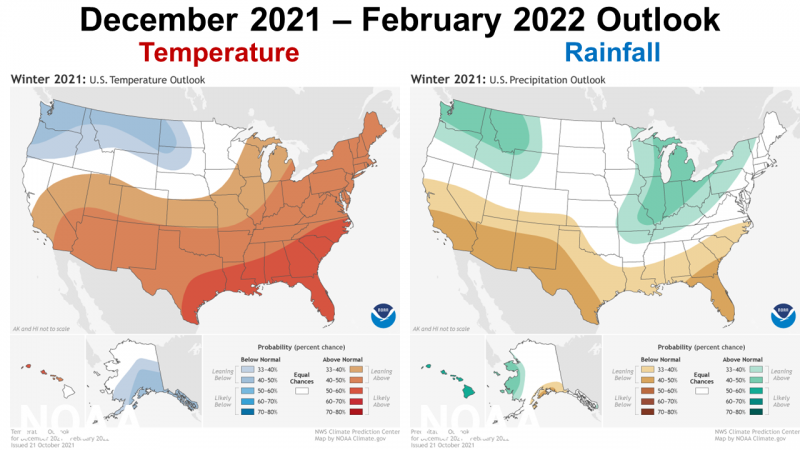 The winter month climate outlook shows a typical forecast for La Niña winters.  The CPC is expecting the Southeast to be considerably warmer than normal, and somewhat direr than normal as well.  We can expect that cold fronts will have much lower affects on the southern portion of the US this winter.  This does not mean there will not be cold snaps or periodic rainfall, but it does mean the general trend will be warmer and direr than usual.  The following video shares how La Niña is expected to affect the US this winter.

If you have not yet planted winter grazing or cover crops, you need to really pay attention to soil moisture and short-term forecasts before planting.  Target plantings with as much available soil moisture as possible.  Winter and early planted spring crops such as wheat, greens, melons, vegetables, and field corn will be more risky without irrigation.  With irrigation, there may be the possibility for an early start to the planting season with milder temperatures in February, but these general trends don’t forecast short-termed freeze events.  Remember what happened last year with the Polar Vortex, so you can’t be certain there won’t be one or two few hard freezes that come in late winter.  The conditions outlined above in the CPC’s outlook are not great news for farmers and ranchers with winter crops, and may also have a negative effect on spring crops.  It all depends on how long the Pacific Ocean stays cooler than normal.  This ocean cooling affects wind patterns and the strength and direction of cold fronts that pass through the US from west to east.  I know it is hard to think about short-term drought out after such a wet growing season, but that is generally what happens during a La Niñas winter in our region.