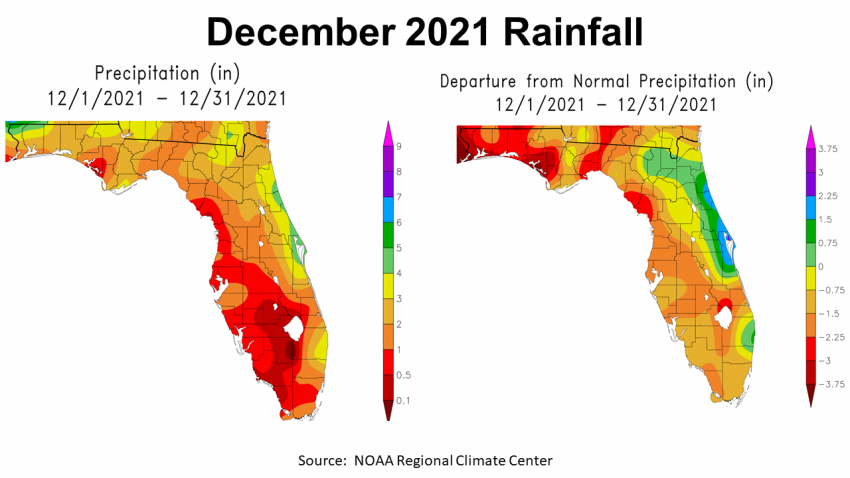 December was another typical La Niña winter month that was warmer and dryer than normal for much of the Panhandle.  The map to the left above shows rainfall estimates ranged from 0.5″ (red) to 6″ (dark green),with most of the region ranging from 2-4″.  The map to the right shows how December 2021 rainfall compared to historic average.  Much of the Panhandle was 0.75″ to 3″ below normal for the month. 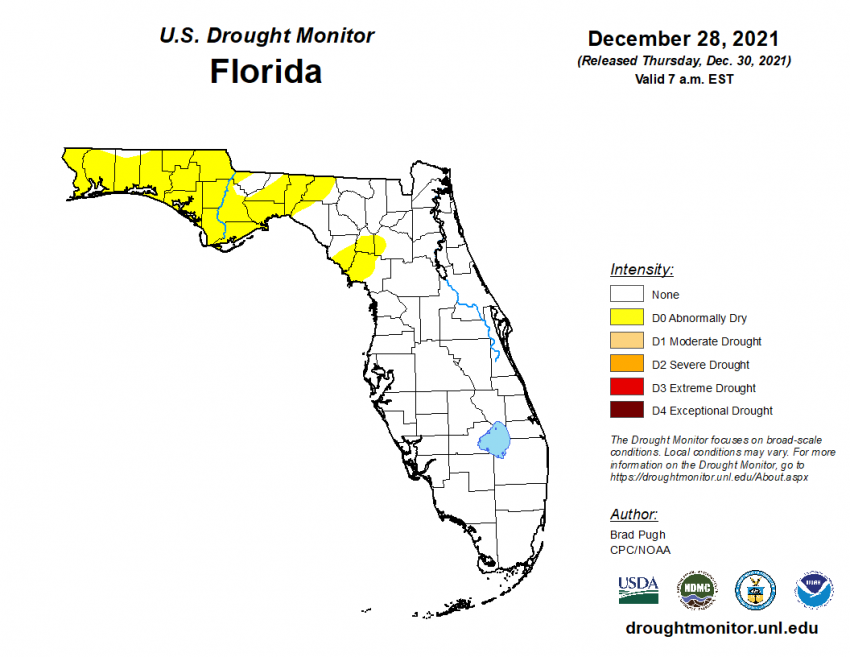 After two dry months back-to-back, much of the Panhandle is now included in the abnormally dry category of the drought monitor.  It is a little hard to believe how quickly the Panhandle dried out after such a wet growing season.  It just goes to show that Florida soils were created to drain moisture quickly, and without regular rainfall they become very dry in a hurry. 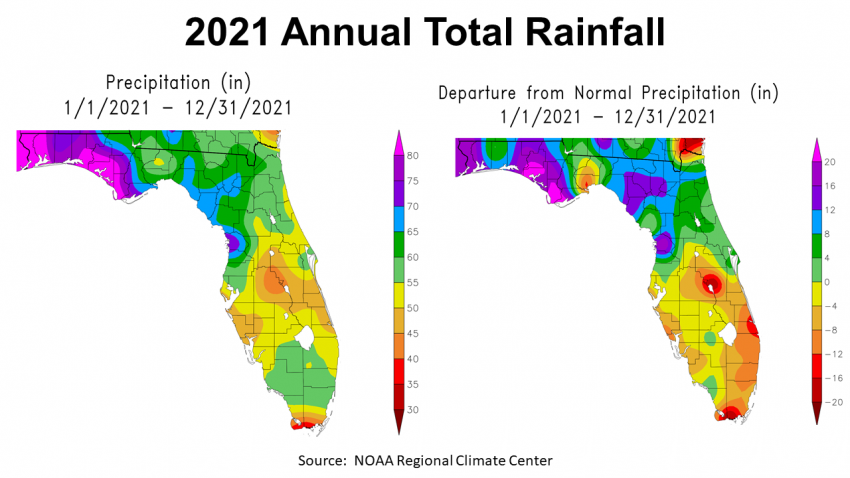 In total, 2021 was a wet year for much of the Panhandle.  Annual totals highlighted in the map to the left ranged from 80+” (fuchsia), to 50-55″ (yellow) in central Leon County.  Clearly the tropical storms boosted the western county totals this year.  The map to the right shows that other than the small area of beige and yellow, the rest of the Panhandle was above normal for the year, with some as high as 20+” above average (fuchsia).

The six Florida Automated Weather network (FAWN) stations showed more specific variation as you move from east to west across the Panhandle.  The wettest location in December was Marianna with 4.1″, but was still -0.3″ below normal.  Monticello was the driest location with only 1.6″, which was -2.1″ below average for the month.  The average for all six stations was 3″ in December, which was an inch below historic average.

For the entire year, only the Monticello station was below average, with 55.6″ compared to the normal annual total of 58.1″  The Jay station recorded a whopping 81.4″ in 2021, almost 17″ above normal for that location.  The average for all six stations was 65.6″, which was 6.9″ higher than normal. 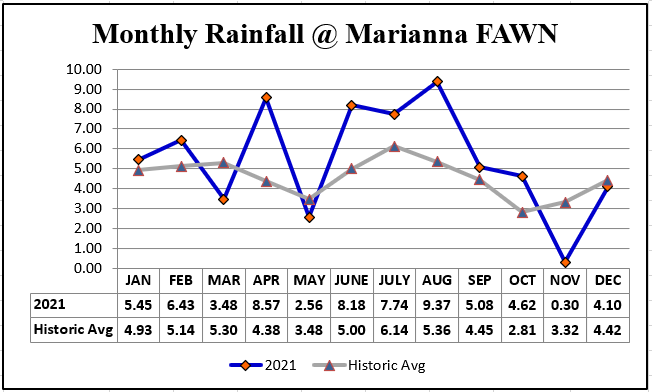 Annual totals can be misleading though, as the chart above demonstrates for the Marianna station, most of the extra rainfall fell in four months:  April, June, July, and August.  As you can clearly see, 2021 was certainly not normal for rainfall in these months.  2021 ranked 14th of the wettest years in the 70 year history of weather measurement at the Marianna Research Station.  So, while it was not a record rainfall year, it was when it fell rather than an extreme total. 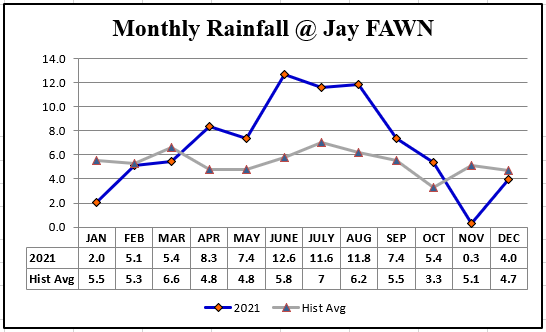 The Jay station, however, was above average for seven of 12 months this year.  I don’t have access to the history database from the Jay site, but would guess this was one of the wetter years in the recorded history of this site. 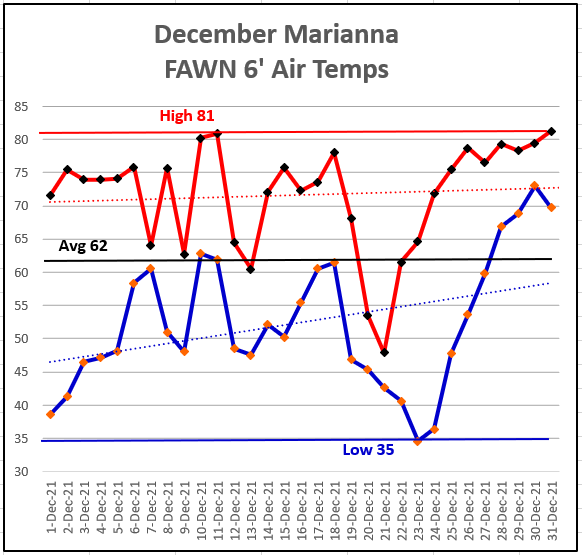 After a more typical month in November, temperatures warmed through the month of December.  The high of 81° came on December 11 and 31.  The low was 35° on December 23.  The average temperature in December was 62°. 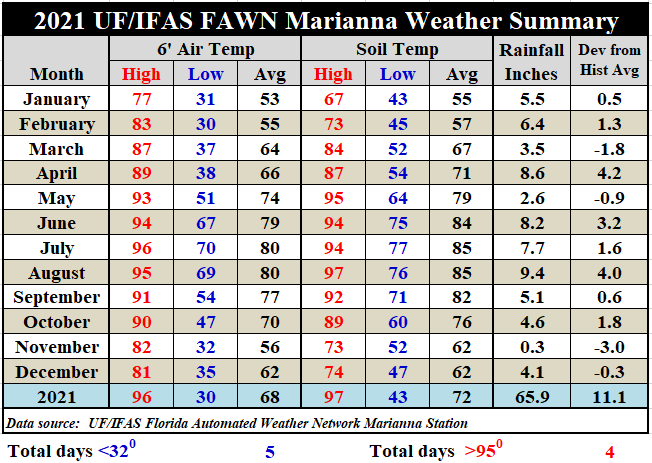 The average 6′ air temperature rose from 56° in November to 62° in December, while the average soil temperature remained constant at 62° in both November and December.  For the entire year the average air temperature was 68°, which was only 1° warmer than NOAA’s 67° historic average for this location.  This is due in part to the 130 days when rainfall was recorded at this location in 2021.  In Marianna, there were only 5 days below freezing (32°) in 2021, and only 4 days above 95°.

Download the daily weather data from the Marianna FAWN Station, and the monthly precipitation data from all six FAWN stations in the Panhandle for more details:  2021 Jackson Co & Panhandle Weather Summary 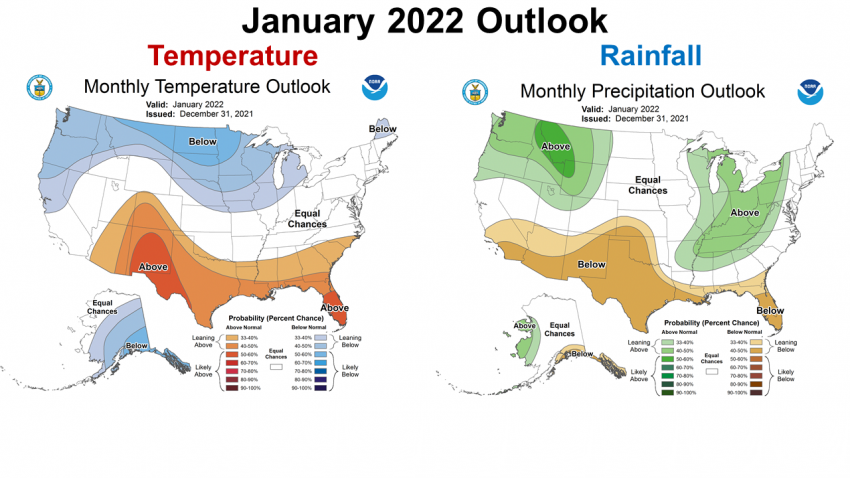 The Climate Predication Center (CPC) updated their January outlook map on the last day of the year.  Based on the continuing influences of the ENSO phase La Niña, the CPC is expecting the warmer and drier than normal trend to continue into January. 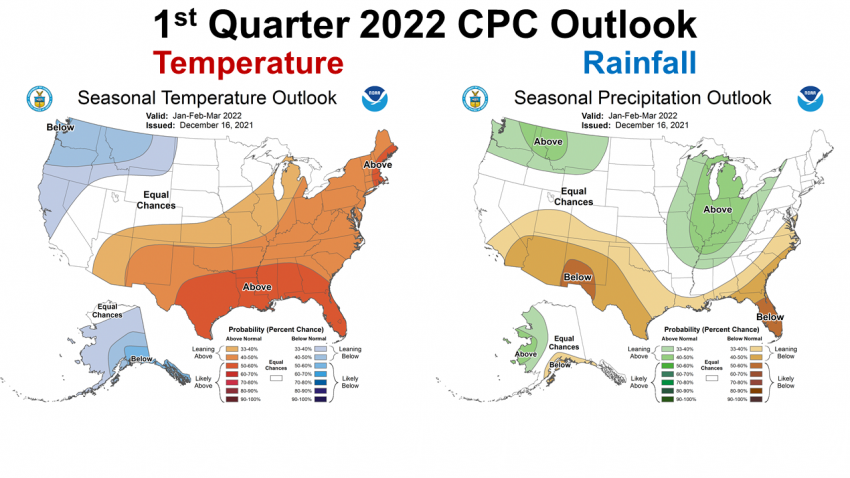 The longer ranged January through March 2022 outlook shows even stronger influence of La Niña.  Warmer and drier conditions are expected to continue at least through March. 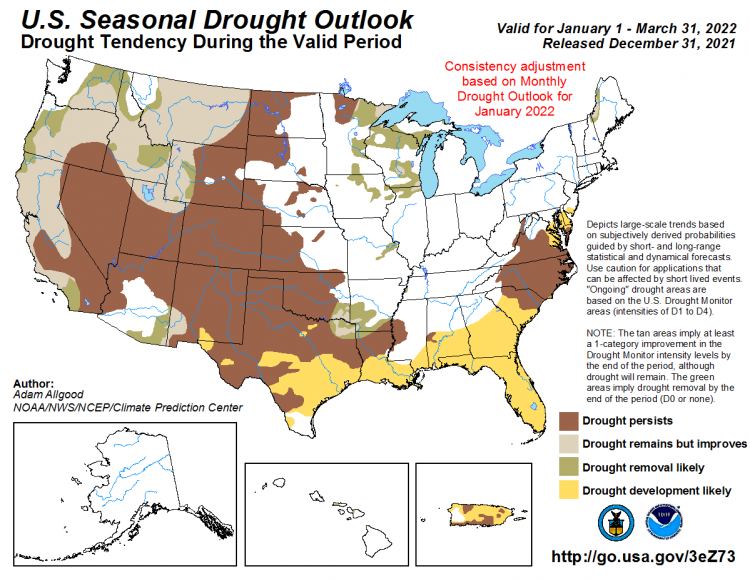 Since we ended 2021 in the abnormally dry category of the Drought Monitor, it is not that surprising that the CPC is expecting drought development across all of Florida through the end of March 2022.

It does appear that we are experiencing a more typical La Niña winter, unlike last winter.  The part that is concerning is that each month the CPC keeps extending when they expect a return to neutral or more a more normal climate.  It is also concerning that CPC is expecting drought development across the Southeast in the coming months.

La Niña is present.  Equatorial sea surface temperatures (SSTs) are below average across thecentral and east–central Pacific Ocean.The tropical Pacific atmosphere is consistent withLa Niña.La Niña is favored to continue through the Northern Hemisphere winter 2021–22 (~95% chance) and transition to ENSO–neutral during the spring 2022 (~60%chance during April–June). Climate Predication Center

So what does this mean for farmers and ranchers in the Panhandle?

The 2021 growing season was really wet through the summer months, especially west of the Apalachicola River, due to tropical storm moisture and very regular summer rainfall.  But, as wet as many areas were at the end of growing season, La Niña  has greatly reduced the flow of moisture in this region at year’s end.  We can expect reduced growth of winter forages, cover crops, and small grains through the winter without irrigation.  Based on the CPC, 3-month outlook and La Niña forecast, it does appear that it will remain dryer than normal through the spring months.  While many center pivot irrigation units remained idle for much of 2021, they may be vital resources in 2022.  It does sound like planting and fertilization timing with forecast moisture will be essential for rain-fed fields.  This also comes in to play with application of pre-emergence herbicides that require rain to be incorporated.  Drought is not a new issue for the farming community, but it has been several years since we have dealt with this issue.  My hope is that this is just a short-term issue, but it is still too early to tell.   At least for the next few months it does appear that dry soils will be a greater issue than normal.