DP 2141NR was evaluated in two trials, the first with reniform nematode at the North Florida Research and Education Center (NFREC) near Quincy, Florida. This trial was part of the National Cotton Council Nematode Committee uniform testing that was conducted in many cotton-producing states. In that trial, five in-furrow or seed coating nematicide treatments were implemented with both DP 1646 (nematode susceptible) and DP 2141NR (resistant). The trial was planted June 11 and harvested December 1. Yield and nematode counts from mid-season and harvest are reported here. 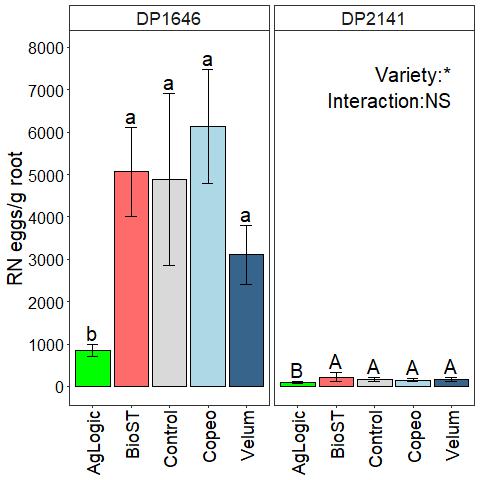 Figure 1. At midseason (38 days after planting), reniform nematode counts in roots were greater for DP 1646 (susceptible) than DP 2141NR (resistant). Within each cultivar, AgLogic also had significantly lower reniform nematode infection than other nematicide treatments (indicated by letters). 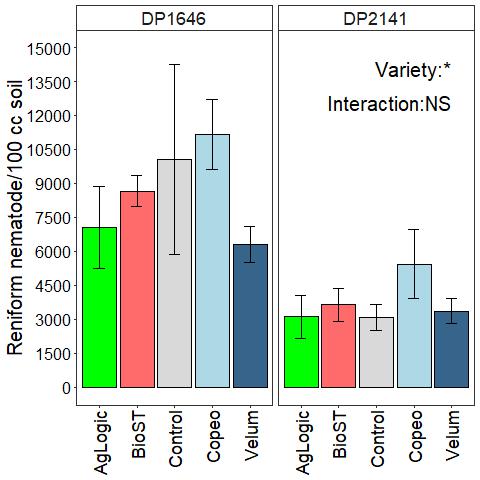 Nematode control by variety and nematicides affected crop growth. Throughout the first trial, the nematode-resistant cotton (DP 2141NR) had more vegetative growth than the susceptible cultivar (Figure 3). This was quantifying and confirmed with visual vigor assessments (data not shown). However, crop vigor did not translate to cotton yield, as the susceptible cultivar (DP 1646) had approximately 100 lb lint/a greater yield than DP 2141NR (Figure 4). Subjectively, greater vegetative growth with DP 2141NR may have actually slowed yield. Near the end of the year, DP 2141NR had a fuller canopy with less senescence. However, there also seemed to be more hardlock, less boll opening, and a more dispersed fruit set with DP 2141NR than DP 1646. Whether this was due to agronomic characteristics of DP 2141NR or the unique circumstances of this trial remain to be seen. From other states that conducted the same trial under reniform nematode pressure, yield of the two cultivars was very similar on average. 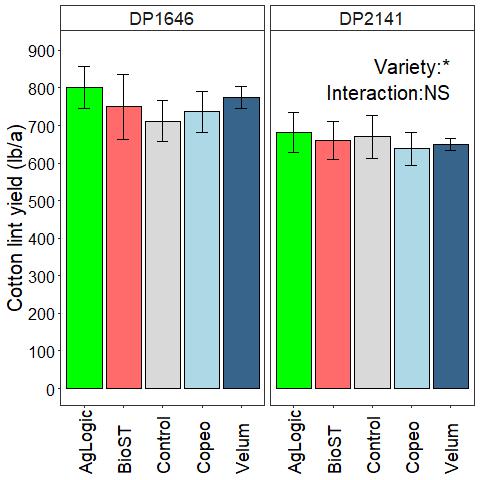 The second trial assessing DP 2141NR was conducted at the NFREC – -Suwannee Valley, near Live Oak, Florida, with southern root-knot nematode the primary pest. The three treatments presented here are (1) untreated control of DP 1646 without nematicide, (2) 1646 with Velum at 6.5 oz/a, and (3) DP 2141NR without nematicide. The trial was planted May 28 and harvested November 3. Data collection was similar to the previous trial except that root galling at harvest was also assessed because that is an important measure of cumulative root-knot nematode damage.

In the trial at Live Oak, either Velum or DP 2141 was effective at reducing midseason root-knot nematode infection (Figure 5 left). The resistant cultivar was more effective for season-long control, reducing final soil nematode counts and galling (Figures 5 and 6). However, none of the treatments significantly affected yield (Figure 6). Lack of yield return may reflect environmental conditions (note low yield) and relatively moderate nematode pressure rather than lack of product efficacy. 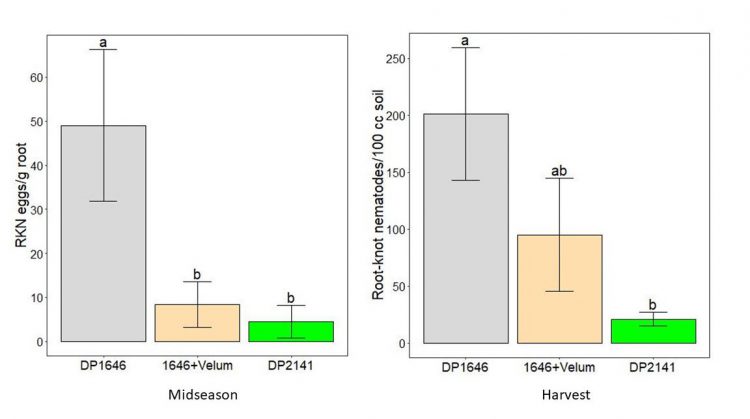 A final trial was conducted at the NFREC – Quincy, this time assessing Phytogen cultivars under reniform nematode pressure. The treatments presented here are (1) untreated control: nematode susceptible cultivar PHY 444 without nematicide, (2) PHY 444 with Velum at 6.84 oz/a, and (3) nematode resistant PHY 443. Data collection was the same as the first Quincy trial, with planting June 2 and harvest November 8. PHY 443 resistant cultivar, but not Velum nematicide, reduced root infection by reniform nematode at mid-season and final reniform nematode soil counts (Figure 7). Nematode management resulted in yield benefits as yield was substantially greater for the resistant cultivar PHY 443 than the susceptible PHY 444 with or without Velum nematicide (Figure 8). 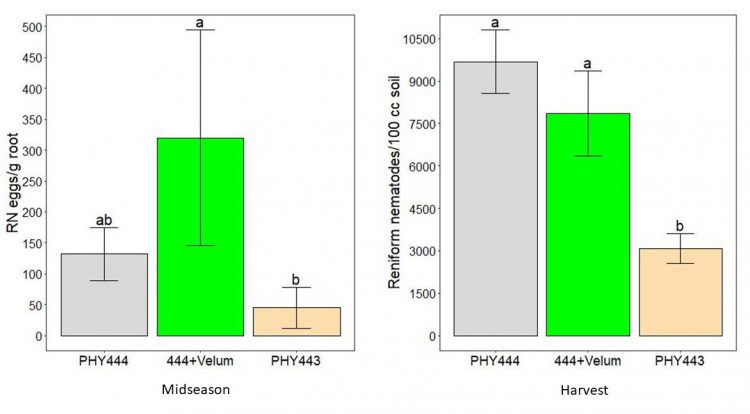 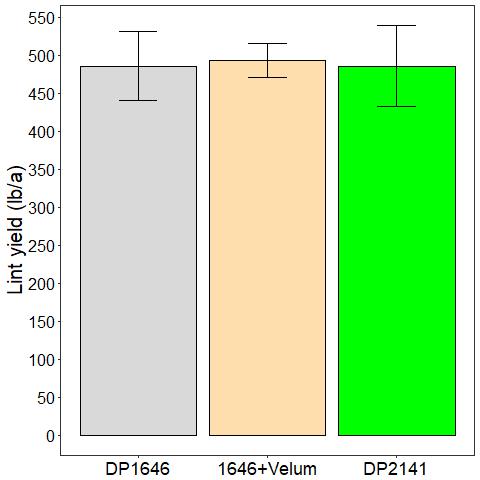 More years of data will be needed to fully evaluate these cultivars, particularly for yield potential. Some main points to take away from this initial evaluation of these cultivars are: