It’s no secret that input costs have snowballed in 2022, due to reasons ranging from pandemic related supply chain issues to geopolitical threats.  Regardless of the reason, it appears that input inflation is here to stay and will be a threat to ranch budgets for the foreseeable future.  Though cattlemen have responded to inflation with various short-term cost savings measures, it’s probably also a good idea to look at your operation’s long-term cost containment strategy, if inflation is indeed “the new normal”.  With the cost of urea (the most common nitrogen fertilizer and often the largest single annual ranch input cost) reaching around $900/ton, one of the best long-term cost-saving solutions cattlemen can implement is integrating a perennial forage legume, like Rhizoma Perennial Peanut (RPP), into grass grazing systems. 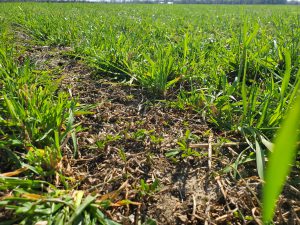 For many years, Perennial Peanut was promoted as a high-quality alfalfa-substitute horse feed and was mostly grown for the premium hay market.  RPP is indeed a high-quality feedstuff (65-75% digestibility and crude protein concentrations from 15-20%) but this promotion unfortunately led many cattlemen to believe that perennial peanut was a luxury they couldn’t afford and there was some truth to that.  Horse quality RPP hay is typically sold in small, square 50 lb. bales for $8-$12, depending on the farm and location.  If you extrapolated that cost out to a typical cow weighing 1,300 lbs that eats 2% of her body weight each day in hay (~26 lbs/day), it’s quickly evident that each cow in the herd consuming around $50 of perennial peanut hay each week would eat any operation into bankruptcy!  In addition to the cost perceptions of perennial peanut, there are also real issues that can arise with weed control in mixed grass/legume systems and the fact that, for at least a year during the initial establishment phase, pastures planted with perennial peanut may not be grazed, removing acreage in the short term from your ranch.

With the Above Challenges in Mind, Why Should I Add Perennial Peanut to My Pasture?

Though not a quick fix, integrating forage legumes into pasture systems can replace much of their nitrogen (N) fertilizer requirement.  Legumes supply N to grazing systems by associating with soil bacteria that reduce atmospheric nitrogen into a form that can be used by plants.  The usable N “produced” by legumes is then returned into the soil for use by pasture grasses through recycling via cattle feces/urine or decomposing legume plant matter.  When RPP is integrated into a pasture at a rate of around 30% legumes to 70% grasses, results from the NFREC Marianna indicate that perennial peanut can add around 50 lbs. N/acre per year, almost totally meeting the pasture’s annual N fertility requirement!   Note: As perennial peanut is somewhat late to emerge in the spring, it does not begin supplying meaningful levels of N until summer and a “starter” N application of around 30 lbs. N/acre in spring may be needed to maximize early season grass forage growth.  In addition to fertilizer cost savings, integration of legumes can also enhance cattle performance.  Cattle grazing a mixed bahiagrass/perennial peanut pasture system often experience an almost doubled average daily gain versus grazing a pure bahiagrass pasture. 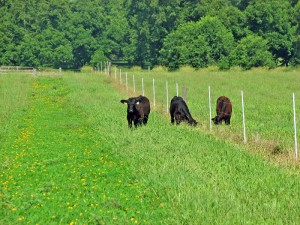 How Do I Get a Perennial Peanut Stand Started in My Pasture?

The most economical way to establish perennial peanut in a grass pastures is by sprigging in strips and allowing the legume to spread from the strips into the rest of the pasture.  Research from NFREC Marianna indicates that while perennial peanut establishment costs can be as much as ($500/acre), strip sprigging over 30-50% of the pasture area and using the remaining grass strips for hay production (making sure to match the strip width to your hay and spray equipment) can significantly offset and reduce that number. Even if you reduce the cost somewhat by strip sprigging, there’s no doubt that the initial sticker shock of establishing perennial peanut can be rough, but, if the stand is properly managed, it will pay off through increased cattle performance and greatly reduced fertilizer application demand.  Also, USDA ‘s Natural Resource Conservation Service (NRCS) can  provide cost-share assistance in establishing perennial peanut in grass pastures through the Environmental Quality Incentives Program (EQIP), further reducing the burden on producers.

Cattlemen have overseeded warm season grass pastures for years in the winter with clover and other cool season forages to build soil, obtain a nitrogen credit for the following crop, and to reduce the need for expensive hay and other supplements.  It’s time to follow the same thought process in the warm season with perennial peanut.  In the past, cattlemen frequently stated that they couldn’t afford to use perennial peanut in their operations.  With the days of near $1,000/ton urea N on our doorstep and the benefits of perennial peanut clear through over a decade of research and on-farm data, we might instead need to ask, “how can I afford not to?”