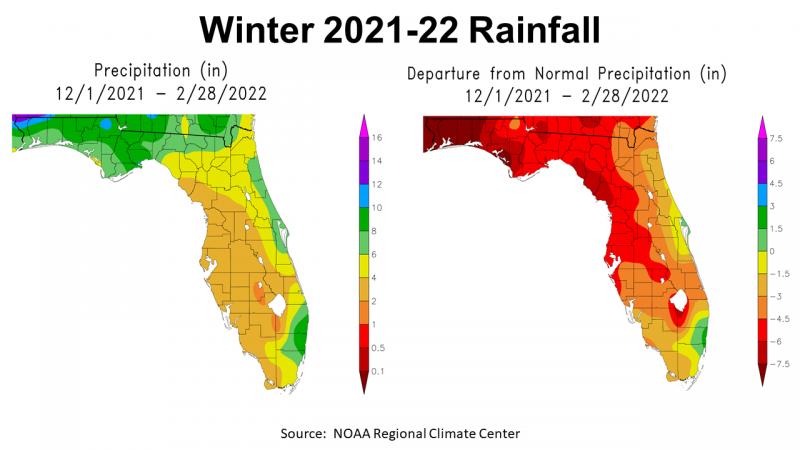 La Niña certainly kicked in this fall and winter and effected rainfall, with high pressure pushing cold fronts well north of the Panhandle.  The map to the left shows the December 2021 through February 2022 estimated rainfall across Florida.  That maps looks pleasant for the Panhandle at least, when you see greens and blue shaded areas.  But when you look at the map to the right, you can see how much lower than average rainfall rates were this winter.  Looking at the departure from normal you understand why wildfires are such an issue right now.  Much of the Florida Panhandle was 6-7.5″ below average.  Almost the entire state of Florida had below average rainfall over the past three months. 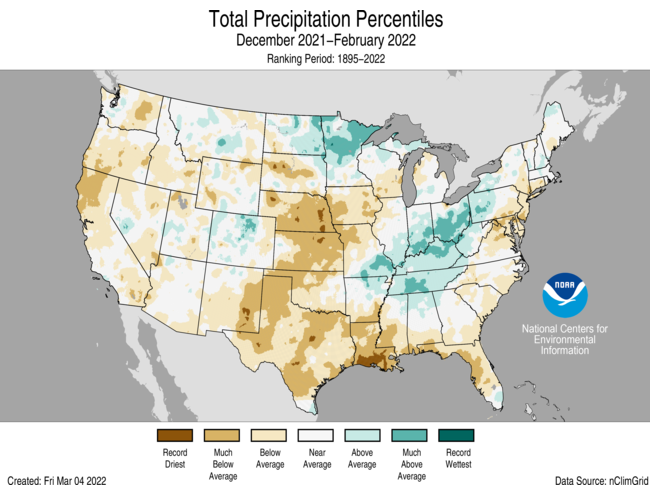 Much of the US was also below or much below average from December through February, except for the areas shaded in teal in the map above. 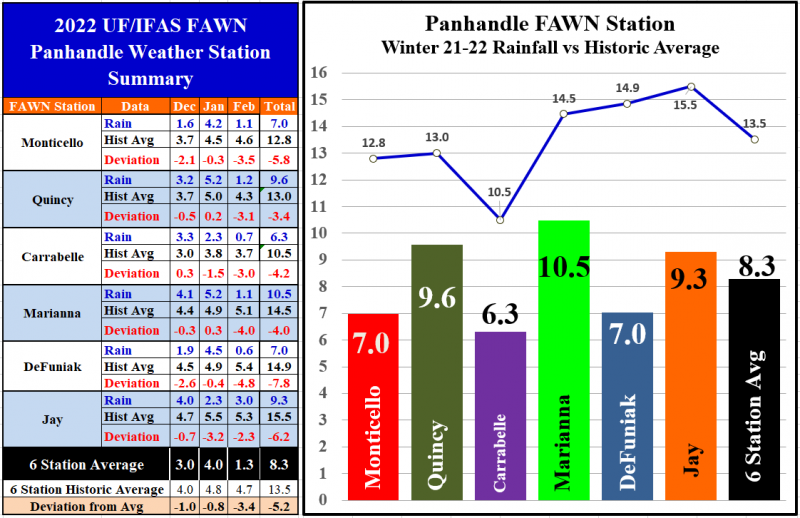 The six Florida Automated Weather Network (FAWN) stations documented the actual rainfall over the last three months at six locations across the Panhandle.  The driest location was Carrabelle with 6.3″, which was -4.2″ below average.  DeFuniak and Monticello were also dry with only 7″ recorded this winter.  The average of all six stations was 8.3″, which was -5.2″ below historic average.

Of the three months, February was by far the direst.  The Carrabelle station only recorded 0.7″, -3″ below normal for February.  Only the Jay station recorded multiple inches with 3″, but even so was -2.3″ below average.  The February average for all six FAWN Stations was 1.3″, -3.4″ below normal for the month.

Not surprisingly the drought monitor shows the dramatic decline of soil moisture in Florida this winter.  At the end of November, which was also a very dry month, just a small portion of the Panhandle was abnormally dry.  By the end of February the majority of Florida was abnormally dry (yellow) or in moderate drought (tan). 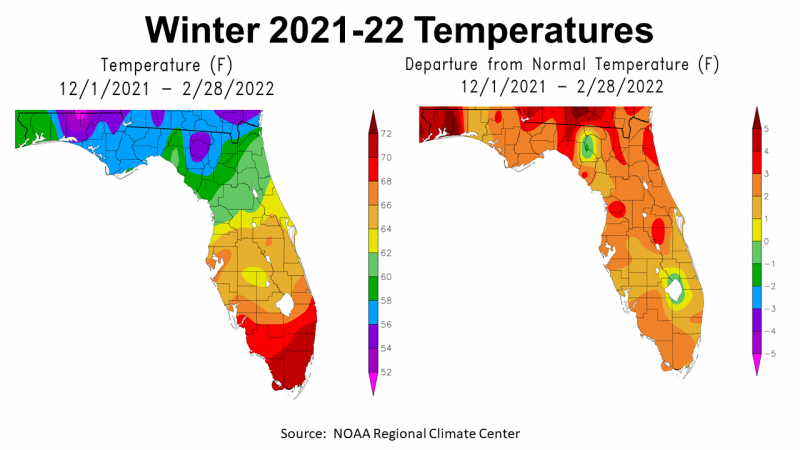 While we did experience some cold weather this winter, the average was actually elevated above normal.  We tend to focus on the highs and lows, or extreme points, but the average for the three-month period was above normal.  The map to the right above shows that the entire Panhandle had above normal winter temperatures, with pockets that were more than 3° above normal (shades of red). 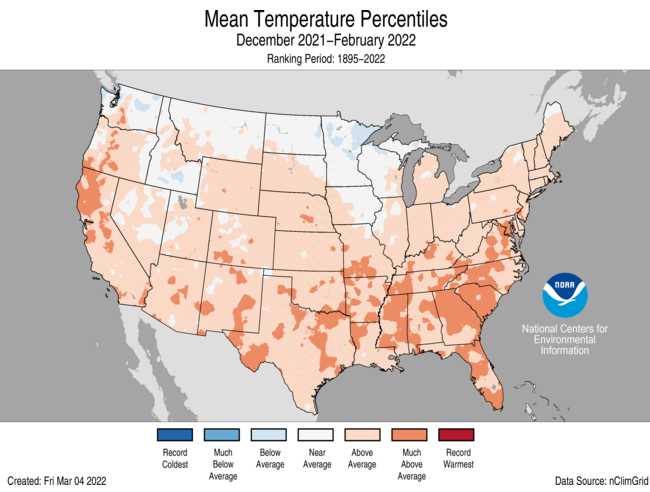 The majority of the US was above normal for the 2021-22 winter.  While the La Niña effect on rainfall was more noticeable, it altered winter temperatures as well.

When you look at the summary table above the range of highs and lows shows that while we did have some cold weather, there were also periods in all three months that were really warm.  The average temperature for the Winter of 2021-2022 was 56° at the Marianna FAWN station.  There were only 7 nights with freezing temperatures this winter, so it did get cold, but it quickly rebounded after each cold front passed.

The Climate Prediction Center (CPC) recently update their climate outlook for March.  The news was not good, as they are predicting that warm and dry conditions will continue.

The news gets worse as when you look at the longer term 3-month outlook, wiht warm and dry conditoins forecast from March through May.  The Chipola Complex fires in March could just be the start of a dangerous wildfire season.  Since the CPC is expecting this to last at least through May, this could become very challenging for rain-fed (non-irrigated) fields at crop planting time. 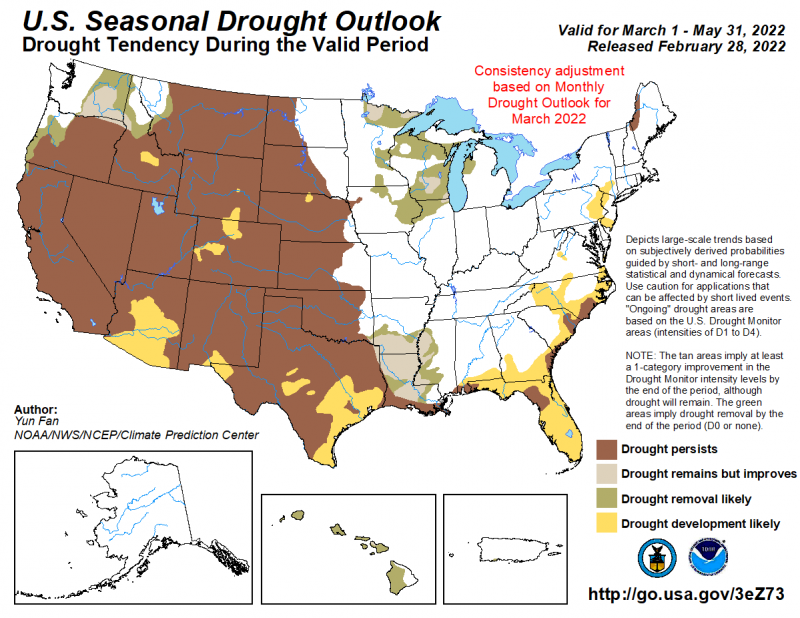 The current CPC Seasonal Drought Outlook predicts drought persistence or development for the entire state of Florida through the end of May.  Based on the latest La Niña advisory, it could even extend through the summer. 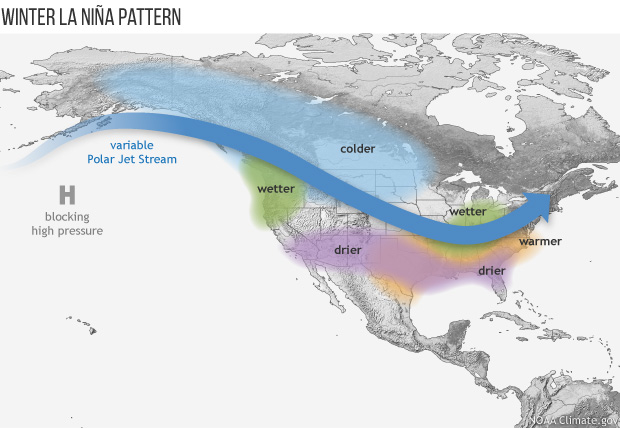 The CPC was expecting the current La Niña to begin to weaken this spring, but it actually got stronger in February.  Now there is a higher chance it could continue through the summer, or even carry on through next fall and winter for a third year.

Below-average sea surface temperatures (SSTs) strengthened during February 2022 across the Pacific. Tropical atmospheric anomalies strengthened during the past month, with the extension of enhanced low-level easterly winds across the equatorial Pacific and upper-level westerly wind anomalies remaining over the east-central and eastern Pacific Ocean.  The forecaster consensus now favors a slower decay of La Niña due to the recent renewal of ocean-atmosphere coupling, which contributed to cooler near-term forecasts from several state-of-the-art climate models.  For the summer and beyond, there is large uncertainty in the state of ENSO.  In summary, La Niña is favored to continue into the Northern Hemisphere summer (53% chance during June-August 2022), with a 40-50% chance of La Niña or ENSO-neutral thereafter. Climate Prediction Center

Pam Knox, Director of the UGA Weather Network and Agricultural Climatologist, shared the following information in her Climate and Agriculture in the Southeast blog site,  based on the latest La Niña update from March 10, 2022.

The latest La Nina discussion in NOAA’s Climate blog came out today, and it shows that surprisingly, La Nina strengthened in February instead of weakening as expected. The latest forecasts for La Nina now indicate that it is likely to last into summer 2022. In addition, the predictions indicate that we may go back for a third year of La Nina. Three-peats are not unheard of, but only two have occurred since 1950, so they are definitely not common. You can read more at the Climate.gov blog. This suggests that the pattern of warmer and drier than normal conditions could continue across the Southeast for the next few months, which would not be good for farmers preparing for their spring planting season.  Pam Knox 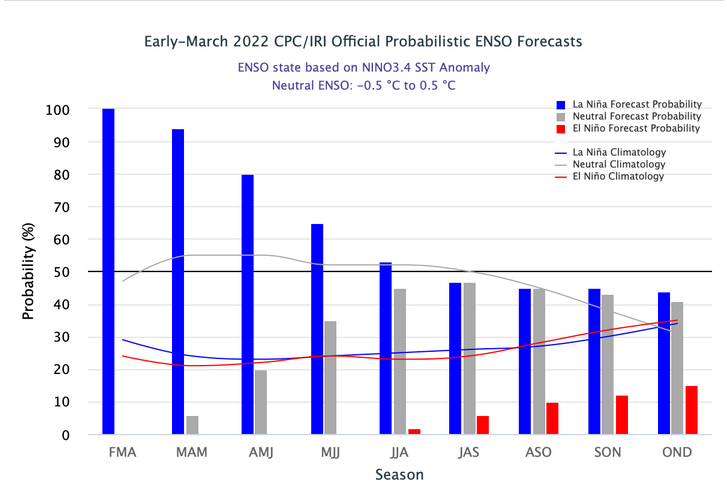 It is still amazes me how quickly the Panhandle dried out after a really wet growing season, but Florida’s soils were created to drain excess moisture not to hold on to it.  Based on current forecasts and long-ranged ENSO phase estimates, drought conditions will continue throughout the spring, and perhaps through the summer.  (ENSO affects are normally much stronger and more predictable for the fall-winter climate).

Late spring is typically a dry time of year in the Panhandle, when cold fronts stop providing rainfall and high pressure reduces the flow of moisture from the Gulf.  With the additional influence from La Niña, planting into moist soils for fast seed germination could be a real challenge in non-irrigated or rain-fed fields.  Planting decisions typically are made based on short-term forecasts, but it will be even more crucial this year.  Take full advantage when adequate moisture is available, and wait if there is not.  Better to plant late and set the crop behind than to have seedling death from drought. Depending on how long La Niña lasts, yield goals may need to be reduced to prevent over investment in fertilizer and inputs.

Livestock producers would be wise to maintain an emergency supply of hay until summer rains begin off of the Gulf.  Planting new pastures or summer annuals is more risky this spring than normal.  There is normally less risk planting in the middle of June, once summer rains start rolling in regularly.  I would definitely avoid planting forages in late April or May in 2022, unless there is adequate soil moisture.  If this drought continues as predicted, you may also want to consider reducing your stocking rate by pregnancy testing and selling off open cows and older, less productive cows.

Be very careful with pile and prescribed burns this spring.  Make sure you check the fire weather status with the Florida Forest Service and get a permit before burning.  If the current season drought outlook is correct, wildfires may continue to be an issue in 2022.

Combining high input prices and the current drought forecast, producers need to decide which fields to invest in for 2022.  These long-ranged climate forecasts are based on probabilities and estimates, so this can all change over time, but the best information we have in March indicates a dry start to the growing season.  Based on the extended drought forecast, it does appear that irrigation systems will play a more vital role than in recent years.  Certainly farmers and ranchers have a lot of tough choices to make this year.  Inflation of input costs was serious enough, but now drought may complicate management even more.

None of this is good news, but there is one other negative from a La Niña summer.  We could also have a more active hurricane season.  According to NOAA, “La Niña suppresses hurricane activity in the Pacific basins, and enhances it in the Atlantic basin.”

Pretty much all bad news to share with this weather update, so check back next month to see if conditions have improved.  As with all weather and climate forecasts, the outlook can change based on new data.  I hope the experts are wrong, but I would advise making preparations based on their current projections.