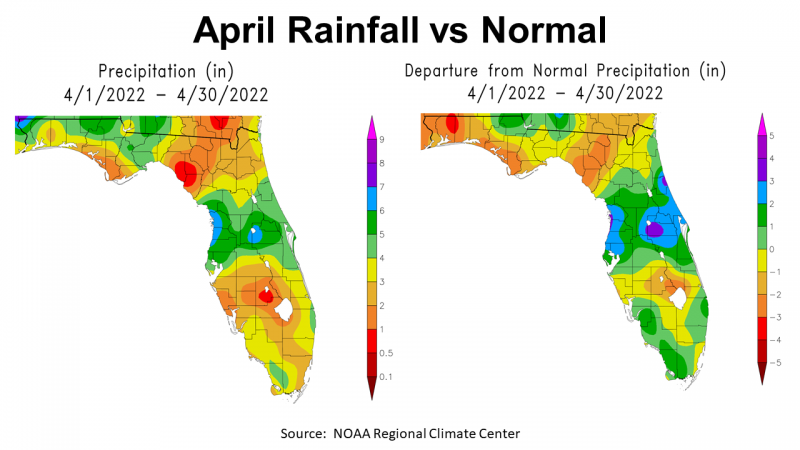 With hot weather just around the corner, it is time to look back at the moisture and temperatures from the last month of Spring.  I know, technically May is part of Spring but not in Florida.  March brought much needed moisture to the Panhandle, after a dry February.  April was not at all uniform.  Much of the Panhandle was drier than normal.  La Niña pushed cold fronts northward leaving many areas in the Panhandle short for the month.  The map above to the left shows that rainfall ranged from 8″ in the northwest tip of Escambia County to a little as 2-3″ in Bay, Gulf, and Franklin Counties.  Much of agricultural region north of I-10 received 4-6″.  The map to the right shows the real story, with isolated areas shaded in light and dark green that were above historic average across the Panhandle.  Most of North Florida was below normal for April (yellow, tan, and brown). 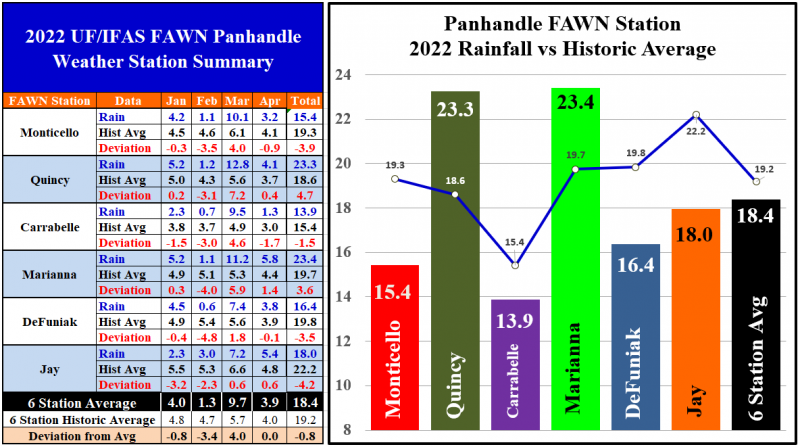 The Florida Automated Weather Network (FAWN) stations showed more precise variation, although only one of these stations is south of I-10.  The wettest location was in Marianna where 5.8″ was recorded, which was 1.4″ above normal.  The Jay station was not far behind with 5.4″, 0.9″ above average.  The Carrabelle Station only recorded 1.3″, -1.7″ below historic average for April. The average for all six stations was 3.9″ in April, which was almost normal for the month.

Through the first third of 2022, the variation in rainfall across the region is even more distinct.  There have only been 13.9″ recorded thus far in Carrabelle, which is -1.5″ below normal.  Compare that with Marianna where 23.4″ were recorded, and 23.3″ in Quincy.  Those two stations were the only ones above historic average from January through April.  The average for all six FAWN stations was 18.4″, -0.8″ below normal. 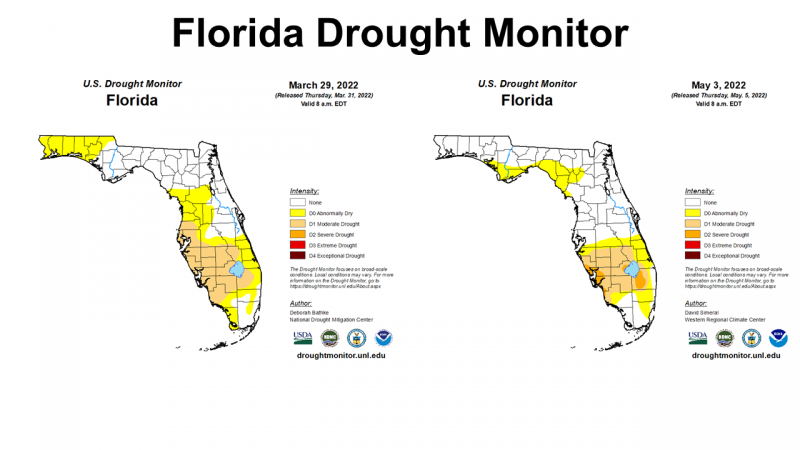 April rains brought drought relief to the Western Panhandle Counties.  You can see the La Niña effects along the Gulf Coast and Big Bend Region, as late spring fronts were pushed northwards.  Rainfall was clearly uneven for the month across Florida.  Now much of the coastal big bend region is in the abnormally dry category of the drought monitor. 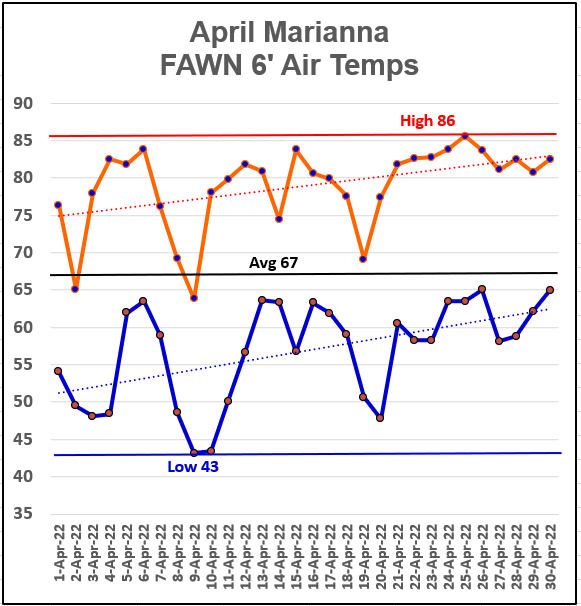 Pulling the data from the centrally located, Marianna FAWN Station, you can see that the month of April started fairly cool but warmed up quickly at month’s end.  The high air temperature was 86° on April 25.  The low of 43° came on the morning of April 9 and 10.  The average for the month was 67°. 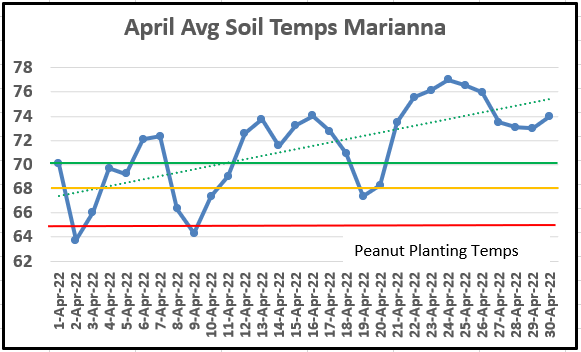 Compared to March, the 6′ average air temperature rose 4° in April to 67°.  Average soil Temperatures rose from 66° to 71°.  Use the following link to access the complete daily weather data from the Marianna Station:  2022 Jan-Apr Jackson Co Weather Summary

This is the first year I have tracked wind speeds at the Marianna FAWN Station.  You can see that those spring cold fronts generated significant straight-line winds.  With that much air movement, it is understandable why spring tornadoes pop up with these storms.  Through the first third of 2022, winds have averaged 5.7 mph in this location, but the top speed was 50mph in March and 40 mph in April. 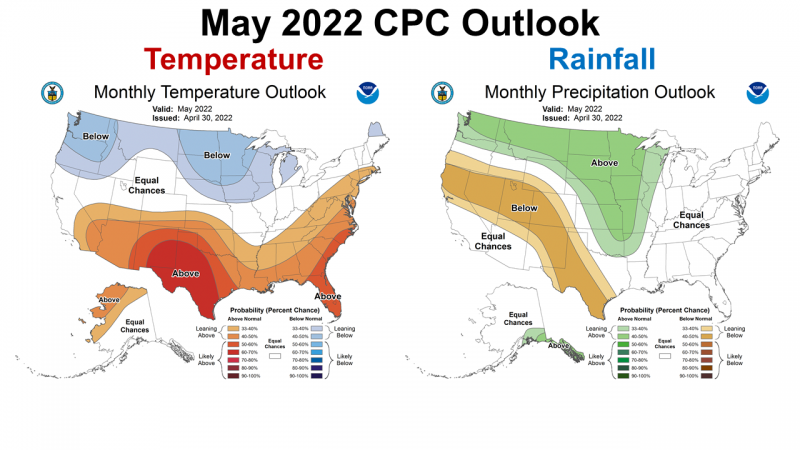 The Climate Prediction Center (CPC) is expecting May to be warmer than historic average, but are not making any clear predictions for rainfall.  This is a positive change from predictions made earlier in the spring.  La Niña typically has a more limited affect during the summer season. 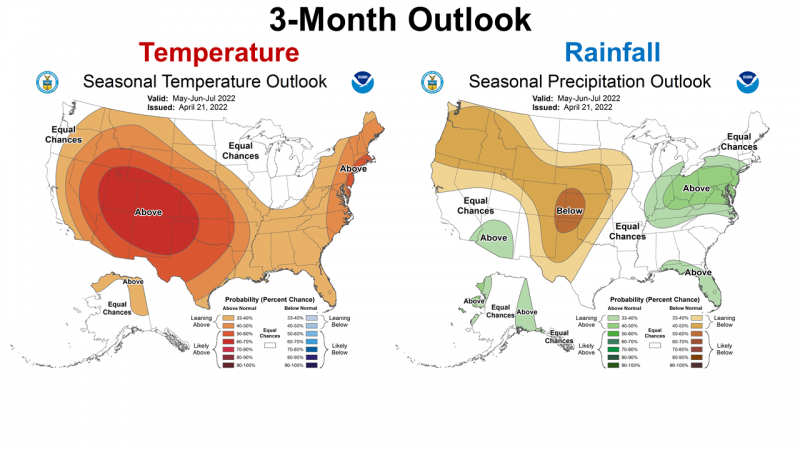 The longer termed 3-month outlook for May through July is very similar for temperature, with warmer than average expected for much of the U.S.  There is an expectation that most of Florida will have above average rainfall as we move through the summer.  So while there is no prediction for May, The CPC expects above average rainfall in June and July for most of Florida. 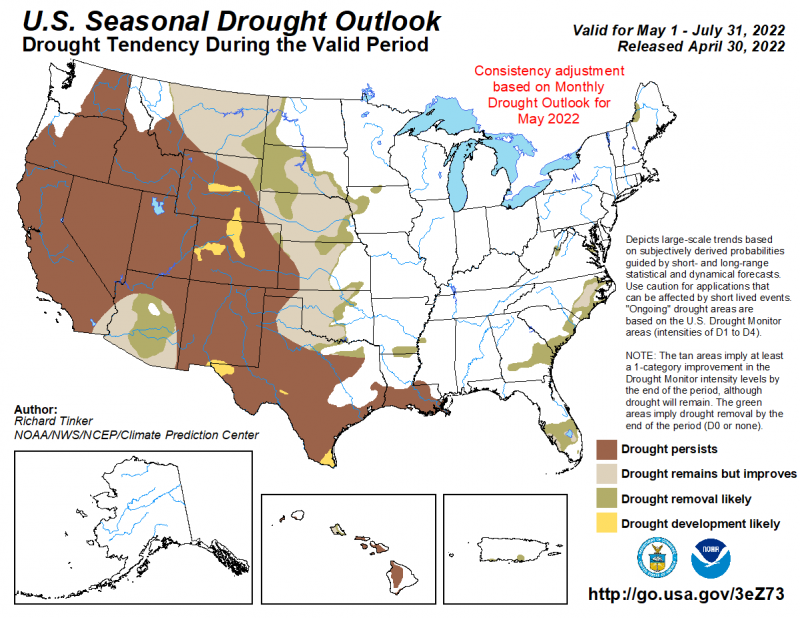 The CPC also provides a seasonal drought outlook that combines current conditions with what is expected in the coming months.  May is expected to provide some drought relief for the Corn Belt, but the western states will likely have little drought relief in the coming months.  This is not that surprising since many of these states get the majority of their moisture over the winter and early spring months.  Conditions are also expected to improve for South Florida over the next three months.

La Niña is expected to hang around for a third year.  This is fairly rare occurrence throughout history, but is not unprecedented.

Below-average sea surface temperatures (SSTs) persisted during April across most of the central and eastern equatorial Pacific Ocean.  The forecaster consensus predicts the current La Niña to weaken into the summer, but remaining below the threshold of La Niña. Much of the model guidance is also hinting at a re-strengthening of La Niña conditions again in the fall and upcoming winter  Though La Niña is favored to continue, the odds for La Niña decrease into the late Northern Hemisphere summer (58% chance in August-October 2022) before slightly increasing through the Northern Hemisphere fall and early winter 2022 (61% chance). Climate Prediction Center

While La Niña typically has reduced effects on the growing season climate, it does play a role in tropical storm formation.

The current La Niña has been surprisingly strong this year, and for now we don’t see an end. Only a couple of La Niñas since 1950 have lasted for three years, so this makes it more difficult to predict what effects it might have on climate conditions. For now, our best bet is to consider this just another La Niña summer, with limited effects on temperature and rainfall during the growing season and the biggest impact on the tropics.  The Atlantic tropical season officially begins on June 1. The predictions this year are for another active season due to the continuing influence of La Niña, which tends to suppress the jet stream which might otherwise keep tropical waves from developing into storms or hurricanes.  Pam Knox, UGA’s Climate and Agriculture in the Southeast

There has been plenty of bad news for farmers to digest through early 2022.  Input prices have skyrocketed while crop markets have improved by not kept pace with inflation.  There is good news with the climate forecast for the growing season.  It does appear that drought conditions will not be a major factor for the early part of the growing season.  While currently there are sections of the Panhandle that are abnormally dry, the CPC is expecting summer rains to kick in June and July and prevent extended drought in the region.  Tropical storms are a real concern, as we have seen very recent examples of an overabundance of rain from relatively weak storms passing through.  We will have to watch and see what comes, but at this point in the year the climate forecast is favorable.  Hopefully we will see adequate rainfall but not too much.  So while profit margins are not as positive, we should have decent yields to pay the bills.  We can’t grow forages and crops without moisture, so the outlook is positive thus far.