What Happened to Asian Citrus Psyllids after a Freezing Event or After a Storm?

Asian citrus syllid has been one of the most devastating pests the citrus industry has faced in the last decade. It is the vector of the bacteria that causes Huanglongbing (HLB) or Citrus greening.  In 2017, the first county record of Asian Citrus Psyllid (ACP) was found in Gadsden County.  A few months later the first HLB was identified in Franklin County. The arrival of ACP and HLB in North Florida coincided with the development of a cold hardy citrus industry in North Florida and Georgia. Since my appointment, two of the most common questions that growers asked me have been: “Do you think a hard freeze in winter will wipe out the psyllids?” and “Do you think a hurricane, or a tropical storm can bring psyllids to our grove?”. To answers these questions, we conducted different studies to determine the effect of freezing events on ACP survival, and the effect on strong wind (such as tropical storm) on psyllid movement. 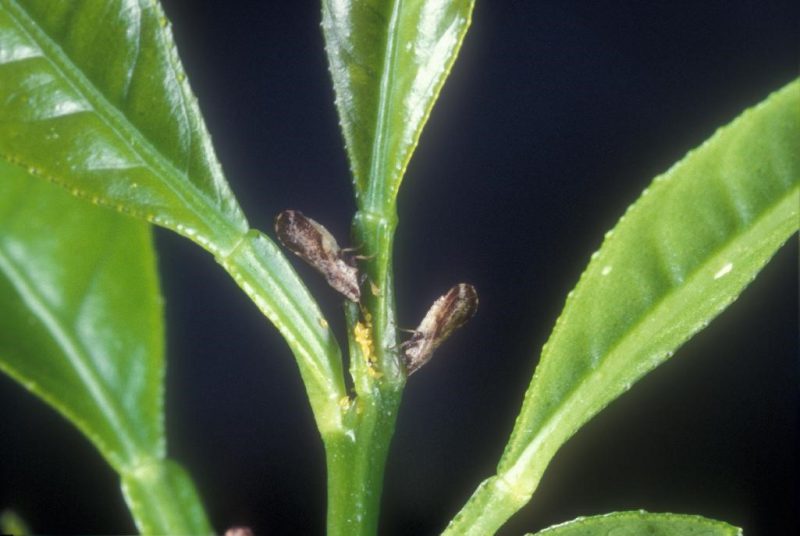 We evaluated the ability of ACP to acclimate to cold and sub-freezing conditions. We subjected one group of insects to gradually decreasing temperatures whereas another group was subjected to intermittent cold periods, and a third group was maintained in a constant temperature of 75°F for one week. When we exposed ACP from these different treatments to 25°F for 10h we found that ACP that were gradually or intermittently acclimated had higher survivorship compared to unacclimated (Fig. 2a and 2b). These experiments demonstrated that with appropriate acclimation, ACP can survive temperatures lower than what was previously thought.

Figure 2: Average survivorship of Asian citrus psyllid exposed to 25 °F, for 10h (A) after gradual cold acclimation or after (B) intermittent cold acclimation. *: difference between treatments is statistically significant

With the use of a wind tunnel, we evaluated the number of ACP that migrated from one plant to another on a short distance, or from one plant into a net placed at the other end of the wind tunnel. We tested ACP dispersion under increasing wind speeds. ACP showed a marked tendency to remain on the source plant until 20 mph (Figure 3a). The highest plant-to-plant movement occurred at the lowest wind speed (Figure 3b) and decreased as wind speed increased. However, wind speeds above 30 mph were able to dislodge ACP from the plant, but most ACP were not able to control their flight and ended in the net behind (Figure 3c).

Figure 4. (A) Wind vane trap deployed to capture ACP when flying in different directions. One side of the trap always faces in the direction of the oncoming wind and the opposite side is always facing contrary to the oncoming wind, allowing to capture insects traveling downwind, upwind or perpendicular to the wind direction. (B) Mean number of ACP captured on different sides of the wind vane traps used to study the direction of the flights depending on the prevailing wind direction. Different letters indicate statistically significant differences between the different sides of the trap.

What can we learn from this?