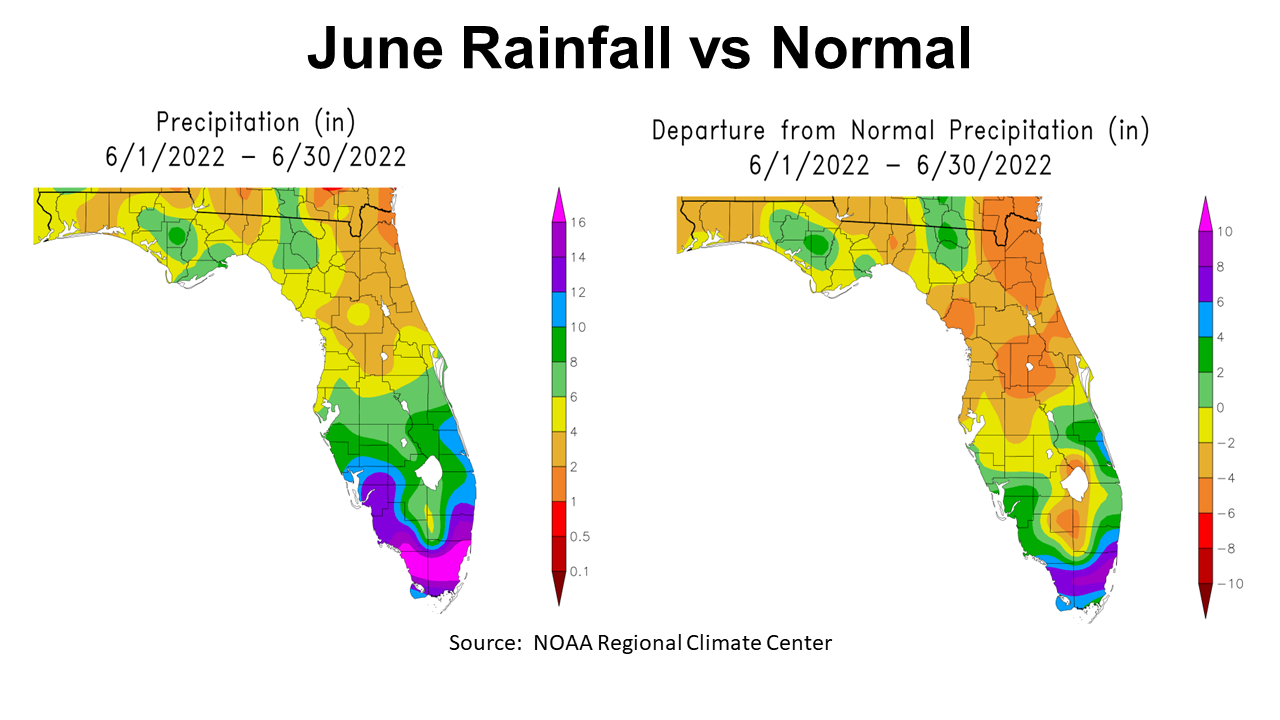 June was really hot and dry across much of the Panhandle region.  Typically June is one of the wetter months of the year, but not this year for much of the Panhandle.  In the map to the left above, you can see areas shaded in green that received over 6″, but most of the region was in the 4-6″ range (yellow), or only 2-4″ (orange).  The map to the right shows the departure from normal rainfall in June.  Only the regions shaded in green were above historic average for the month.  Most of the Panhandle was below average (yellow) or -2-4″ well below normal (tan). 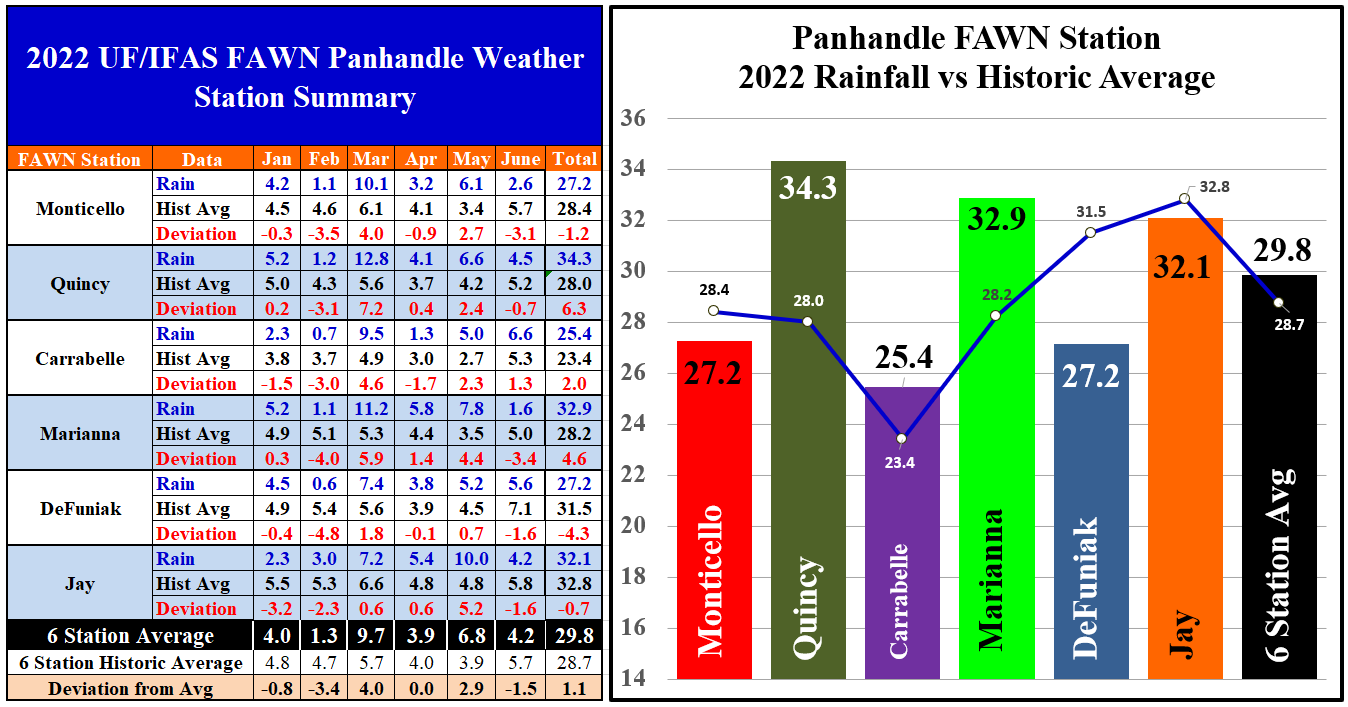 The six Florida Automated Weather Network (FAWN) show more precise variation across the Panhandle, in June 2022.  The wettest location was Carrabelle with 6.6″, which was 1.3″ above average.  Contrast that with only 1.6″ recorded in Marianna, which was -3.4″ below average for the month. There were only seven days of recorded precipitation in Marianna in June.  The average for all six stations was 4.2″, -1.5″ below historic average.

Through the first seven months of 2022, three stations had below average rainfall, and three were above average.  The wettest location was in Quincy, where 34.3″ has been recorded thus far, which was 6.3″ above average.  Even with the added rain in June, the Carabelle still has the lowest annual total thus far with only 25.4″.  The average for all six stations through July was 29.8″, which was 1.1″ above average. 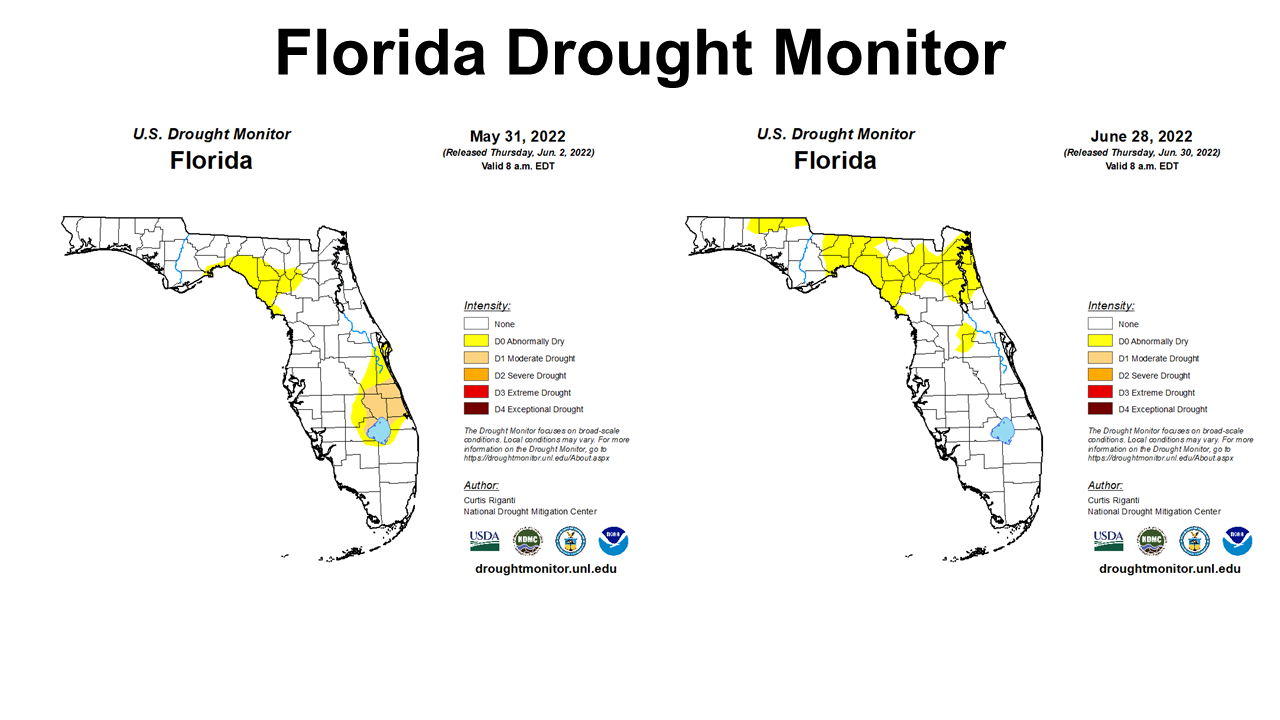 The Florida Drought Monitor from May 31 to June 28 shows the expansion of abnormally dry conditions across some of the Panhandle, but primarily in the Big Bend.  There was significant improvement in the counties north of Lake Okeechobee in June. 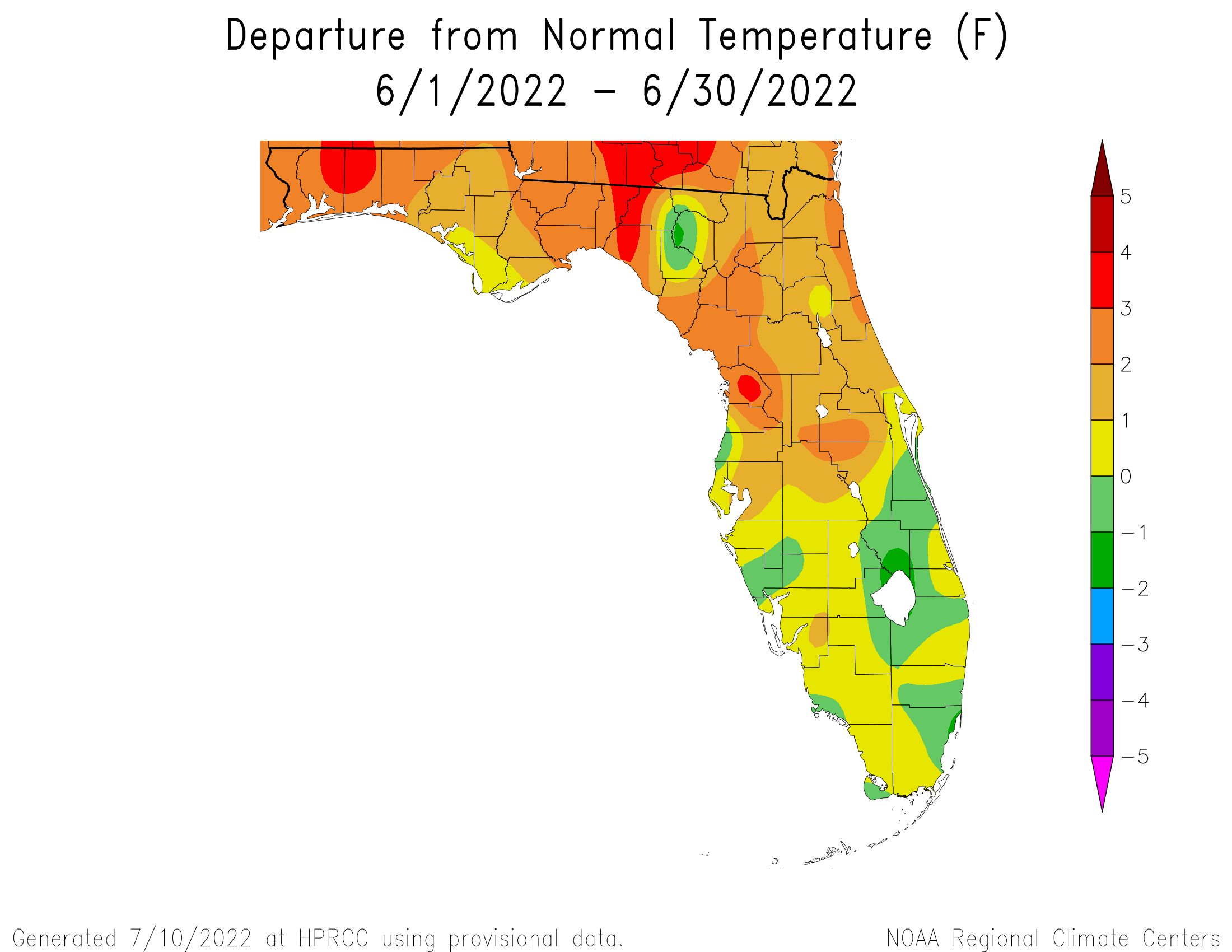 As you can see in the map above, almost all of North Florida had above average temperatures in June 2022.  Some areas in orange we 2-3° warmer than normal, with hot spots in red that were 3-4° above average. 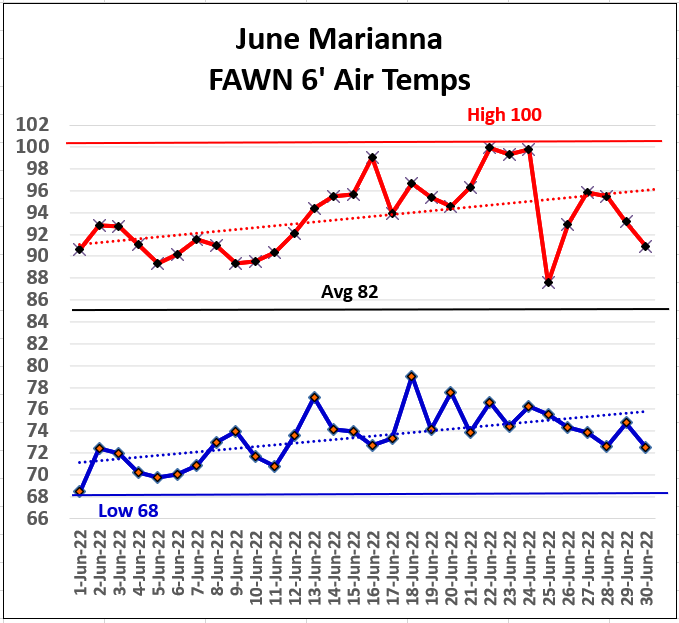 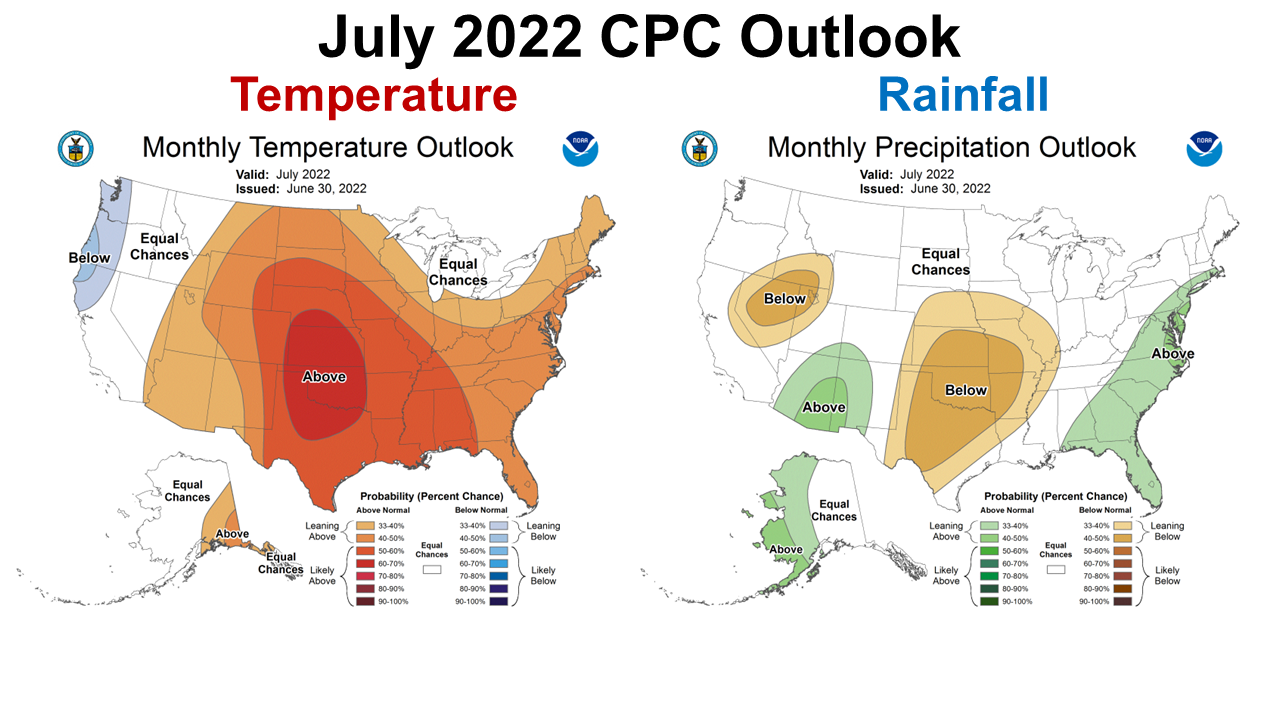 The Climate Prediction Center (CPC) is expecting the hot weather to continue through July.  They do expect above average rainfall, however, so that should help with the flash drought (high temperatures with limited rainfall) situation in July. 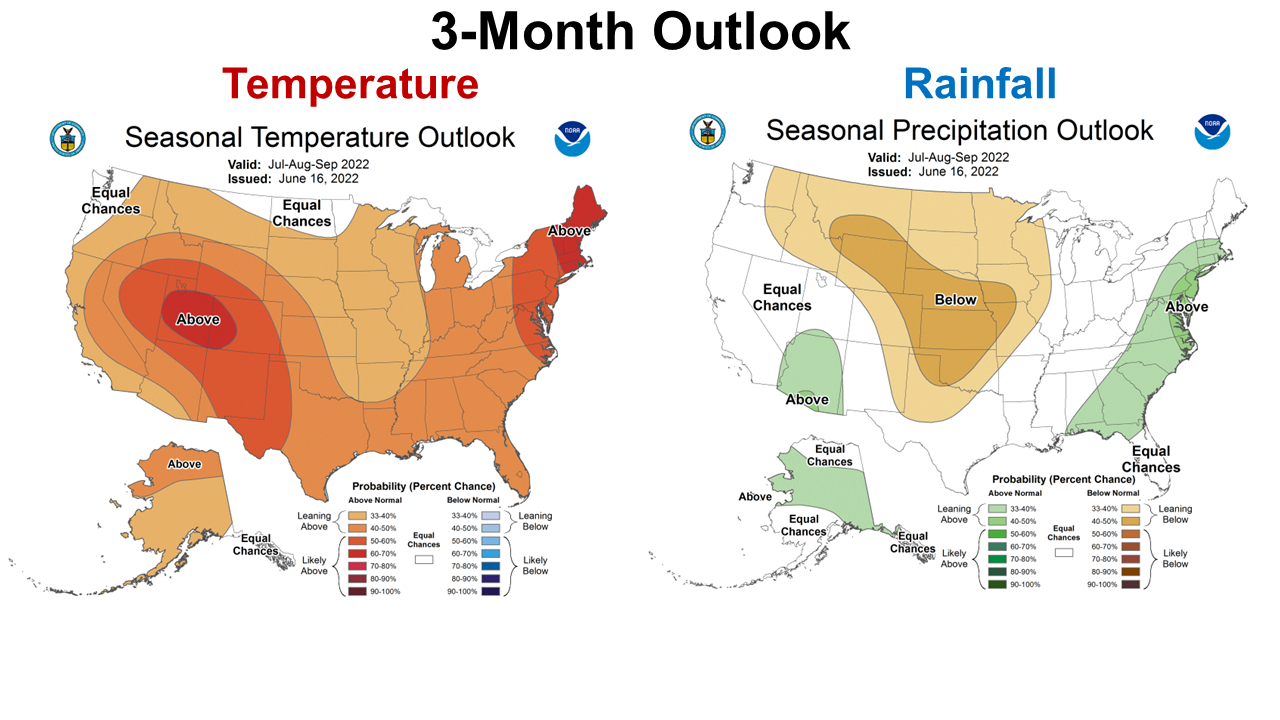 The longer termed thee-month outlook is similar to the July outlook.  The hot summer will continue through the “Dog Days.”  Higher than normal temperatures and rainfall is expected, so this is good news for scorched crops and pastures.  The expected rainfall should provide better growing conditions than in June.

The CPC is still expecting a third straight La Niña this fall and winter.  The effects will not be as dramatic through the dog days, but we can anticipate a warmer and drier than normal fall and winter again, based on their recent forecast.

During June, below-average sea surface temperatures (SSTs) weakened across most of the central and eastern equatorial Pacific Ocean with SSTs returning to near-average in the east-central Pacific.  The forecaster consensus also predicts La Niña to persist during the remainder of 2022, with odds for La Niña remaining at 60% or greater through early winter. Lowest odds occur during the next few months with a 60% chance of La Niña and a 39% chance of ENSO-neutral during July-September 2022. Subsequently, chances of La Niña increase slightly during the fall and early winter. In summary, La Niña is favored to continue through 2022 with the odds for La Niña decreasing into the Northern Hemisphere late summer (60% chance in July-September 2022) before increasing through the Northern Hemisphere fall and early winter 2022 (62-66% chance).  Climate Predication Center

What does this mean for farmers and ranchers in the Florida Panhandle?

Based on CPC outlooks, it appears that the flash drought has come to an end, but it will remain hot for the next three months.  Above average rainfall would be welcomed in many areas across the Panhandle.  It does appear that while crops and pastures have been struggling, they should get back to a more normal summer growth rate in the coming months.  The great concern this season was from the added activity from Tropical Storms and Hurricanes in La Niña years.  An active storm season later this summer and early fall could reduce yields similar to the past two years.  Let’s keep praying that the Panhandle will get a break this season.   Unfortunately, farmers and ranchers are very familiar with La Niña cool-seasons.  This will be the third such forecast in a row.  That is not good news for cover crops and winter forages.  Expect another dry fall to plant in, and less than ideal yields from these crops. With high seed and fertilizer prices, I would encourage investment only in fields with irrigation, or fields with better moisture holding capacity.