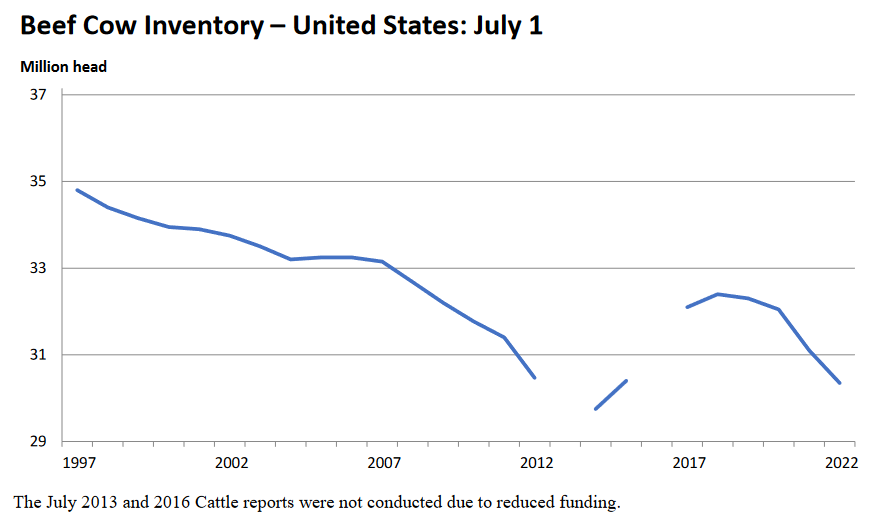 The USDA National Agricultural Statistic Service (NASS) published their annual July 1 Cattle inventory Report on July 22, 2022.  There were not many surprises in this year’s report, but it is helpful to know the general trend in the US.  The total, “All Cattle and Calves” July inventory was 98.8 million (M), which was down 2% from 2021, but down 4% from the most recent peak of 103M in 2018 and 2019.

When you compare the estimated 2022 July cattle inventory by category to 2021, there were two classes that have not decreased, cattle on feed and breeding bulls over 500 pounds.  Every other class of animals dropped 1-3% from last years estimates.  The two classes of most interest to cow-calf producers in the Southeast are likely beef cows and beef replacement heifers. Beef cows dropped 2% from 100.8 M to  98.8 M and replacement beef heifers dropped 3%, from 4.3M to 4.15M. 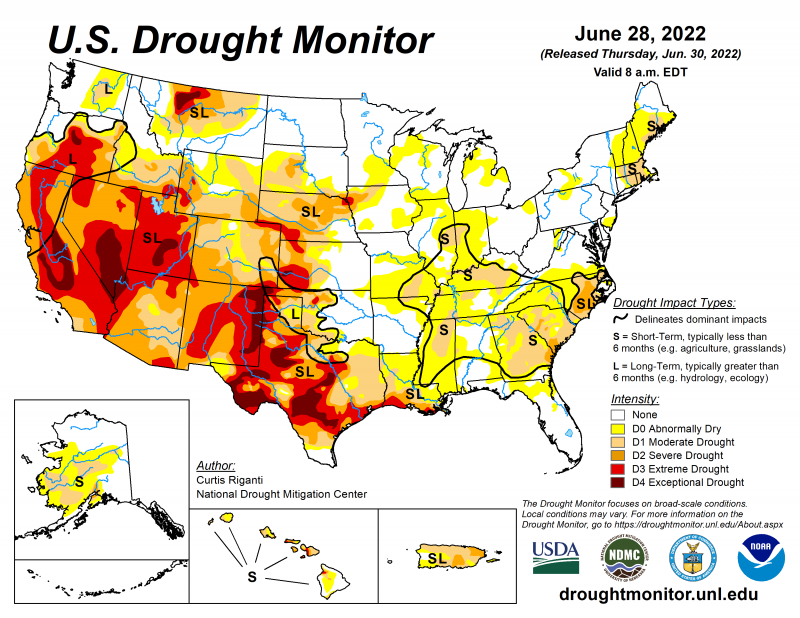 The root cause for this decline in inventory is related to ongoing serious drought. The graphic above was published on June 28, just prior to the USDA Inventory report release.  Until there is adequate native range and forage production this reduction in inventory is likely to continue, and possibly at an ever faster rate.

The July Cattle Report confirmed that the cumulative effects of drought the past two years have accelerated liquidation of the beef cattle herd…  Feedlot placements in June were down 2.4 percent from one year ago.  This is the fourth consecutive month of lower feedlot placements.  In the past two months, placements have consisted of increased numbers of cattle under 700 pounds with sharper decreases in placements over 700 pounds leading to an overall decline in placements.  Placements would have fallen faster without the lightweight placements.  Increased lightweight placements now mean that fewer cattle will be available for placement later…  There are indications that drought impacts have accelerated sharply in the Southern Plains in July.  The percent of Oklahoma pastures and ranges rated as poor to very poor jumped from 18 percent in early July to 34 percent in the July 18 Crop Progress report.  Cattle producers are destocking at a rapid rate as pasture conditions deteriorate rapidly.  The volume of feeder cattle in Oklahoma auctions the past two weeks is up 24 percent year over year.  It appears that calves are being weaned and marketed early… The auction volume of cull cows and bulls jumped nearly 124 percent over last year in the past two weeks.

What does mean for Panhandle Cattle Producers?

Owning a business that is greatly affect by weather and climate is very challenging.  The serious drought in other areas of the country means that cattle producers in the Southeast will benefit from the reduced inventory.  Fewer calves should create a continued trend of improving cattle prices, but it does take some time for the full effect to take hold.  Feedlots are almost as full as last summer, but if producers in serious drought areas are selling off calves early, marketing more heifers, and culling a higher percentage of their cows, the day is coming when calves will be in short supply.  However, it may not be this summer when you wean and sell calves.  The longer you can hold them the better the price may be, as there will be fewer offerings this fall.  Don’t hold them too long though, as cattle over 800 pounds eat a lot of expensive feed and are not commonly traded in our region. All categories of cattle should continue to increase in value, as long as consumer demand does not decline.  With the current state of US and world economics, who knows what economic challenges will come next summer.  At least there will be less competition for calves, so prices should improve in 2023.