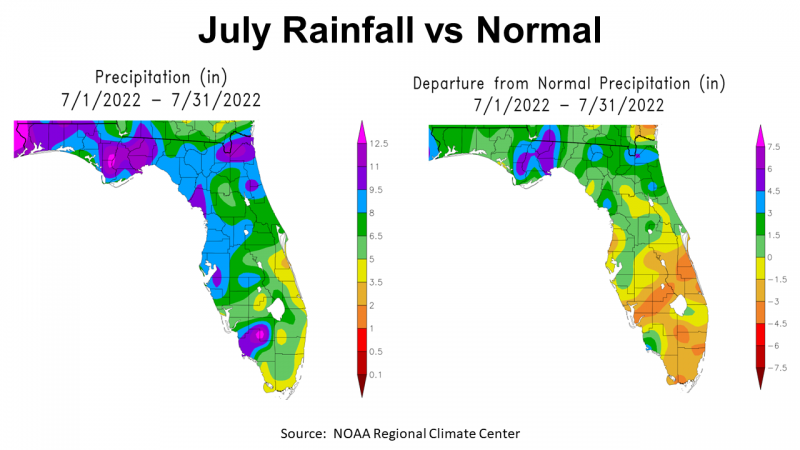 July brought some relief for many areas of the Panhandle that were abnormally dry.  The cloudy and rainy afternoons helped bring temperatures back down slightly as well.  In the map to the right above you can see that several of the Western and Central  Panhandle Counties received over 9.5″ (purple, mauve, and pink), while the majority of the Panhandle had 8-9.5″ (blue) or 6.5-8″ (green).  In the map to the right you can see how July 2022 rainfall compared to historic average.  The entire Panhandle was above average, but much of Central and South Florida was below average.

The six Florida Automated Weather Network (FAWN) stations show the variation in rainfall in the Panhandle for July.  Quincy was the wettest location with 11″, wgich was 4.7″ above average.  Only 5.8″ was recorded at the Marianna station, which was -0.3″ below normal.  The average for all six stations was 9.2″, or 2.4″ above average for July.

Through seven months, the Quincy station has recorded 45.5″ thus far, which is 11.1″ higher than normal.  Compare that with the station at Carrabelle with only 33.1″.  Only the DeFuniak station with 38″(-0.7″) has been below average through this point in the year.  The average of all six stations from January-July was 39″, that was 3.5″ above average. 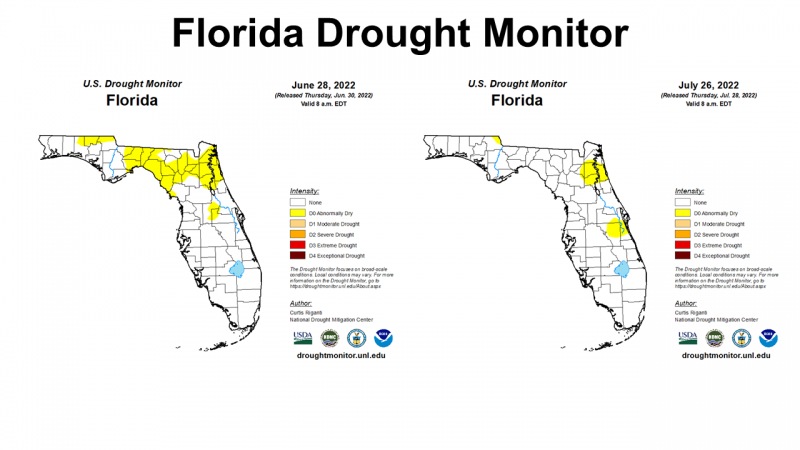 The Florida Drought Monitor shows that drought conditions were improved for most of the Panhandle during July.  Only the northeast corner of Jackson County remained abnormal dry at the end of the month. 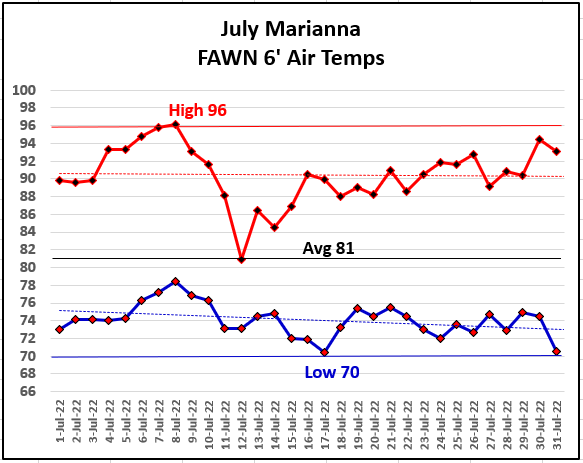 Temperatures remained high in July, but nothing like June.  The morning lows slowly cooled through the month.  The high of 96° came on the afternoons of July 7 and 8.  The low of 70° was recorded on July 17.  The average 6′ air temperature was 81° in July. 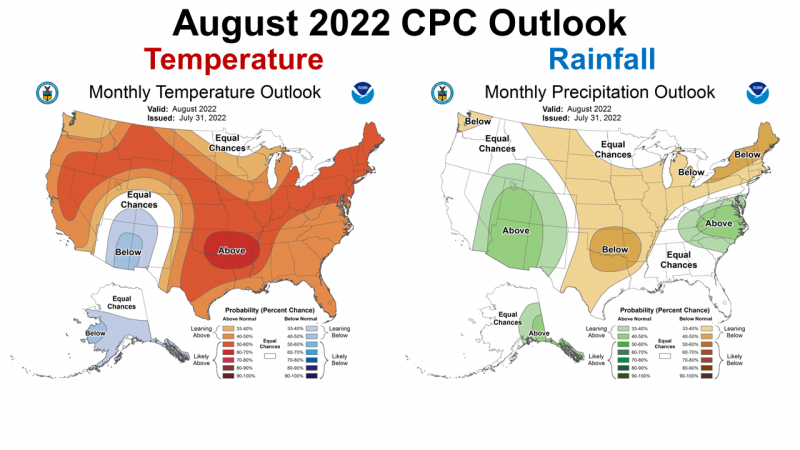 The Climate Prediction Center (CPC) released an updated outlook for August 2022.  They expect the majority of the US to be warmer than average.  The Southeastern US is in the zone for 40-50% probability zone, so we can expect the hot summer weather to continue another month.  The CPC made no prediction for rainfall in our region, so we have equal chances for above or below average. 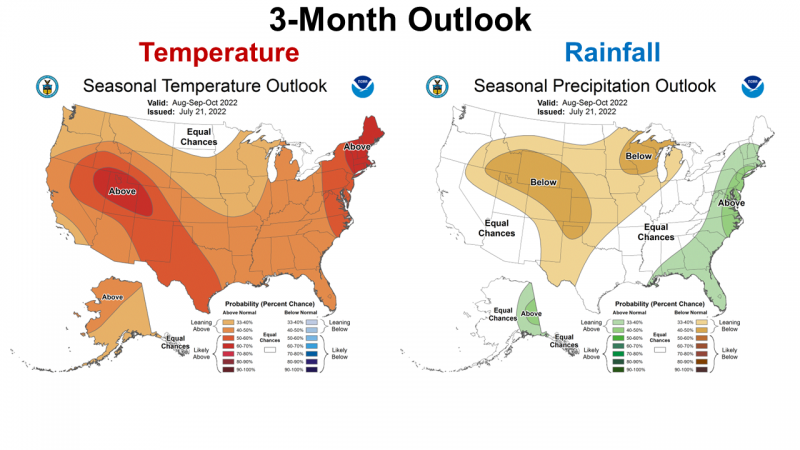 The CPC’s August through October forecast is similar to the August Outlook.  They expect the warmer than normal conditions to hold through the growing season, but they are leaning toward wetter than average for the 3-month precipitation outlook.

The CPC is still feeling pretty certain that we will have a third straight fall-winter La Niña coming.

La Niña is present, with equatorial sea surface temperatures (SSTs) are below average across most of the Pacific Ocean. The tropical Pacific atmosphere is consistent with La Niña. La Niña is favored to continue through 2022 with the odds for La Niña decreasing into the Northern Hemisphere late summer (60% chance in July–September 2022) before increasing through the Northern Hemisphere fall and early winter 2022 (62–66% chance). Climate Prediction Center

Drought conditions improved through the region in July.  The current outlook for August is for an average rainfall month, which is typically 6.5″ across the Panhandle.  The longer ranged outlook expects above average rainfall.  The average for the six FAWN stations from August through October is 15″.  Unless there are tropical storms in the region, this means that we should not have to worry about drought conditions like the western states.  If these expectations hold true, we should have a good finish to the growing season.  The La Niña cool-season means below average rainfall for this region, so we may start to get drier at planting time for cover crops, winter annual pastures, and small grains.  It really depends on how active the tropics become, but it does appear that the climate for crops and pastures is favorable over the next few months, but may not be as favorable late in the year.