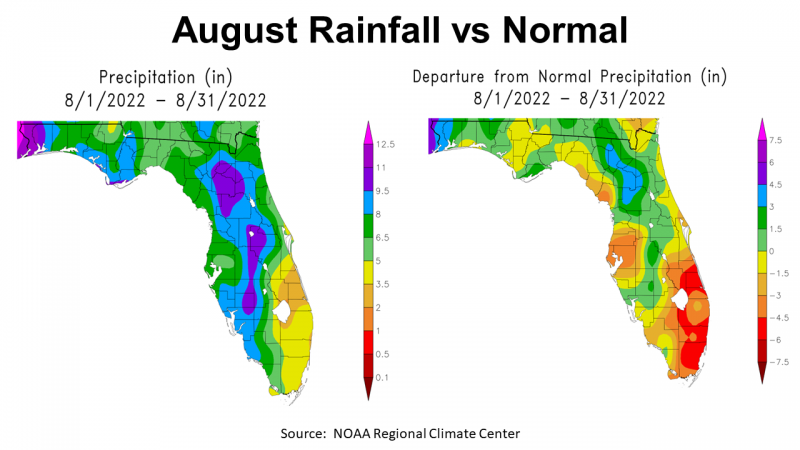 August 2022 was another hot and steamy month for the Panhandle that brought variable rainfall to the region.  The western counties received over 9.5″ (purple, mauve, & magenta), as seen in the map above to the left.  Areas in blue received 8-9.5″ in August, while the majority of the region ranged from 5-8″. The map to the right shows the contrast with historic average.  All of the areas shaded yellow were below average in August.  Only Santa Rosa and Escambia Counties were three or more inches above average.  The majority of the Panhandle was near average or slightly below for the month.

The six Florida Automated Weather Network (FAWN) stations showed more specific variation in August.  The station near Jay recorded 7.8″, which was 1.6″ above normal.  Contrast that with the 4.8″ in Marianna, -0.6″ below average.  The average for all six stations was 6.2″, which was -0.2″ below historic average for the month.

From January to August, only the DeFuniak Springs station was below average with 43.5″ compared to the 45″ average in this location.  The station is Quincy was 12″ above average, with a total of 52.5″, with four months still to go in 2022.  The average of all six stations through eight months was 45.3″, which was 3.3″ above average.

August rainfall was adequate to remove the small areas of abnormally dry conditions found in North Florida at the start of August.  Unfortunately, the Southeast Coastal region of Florida dried out considerably through the month. 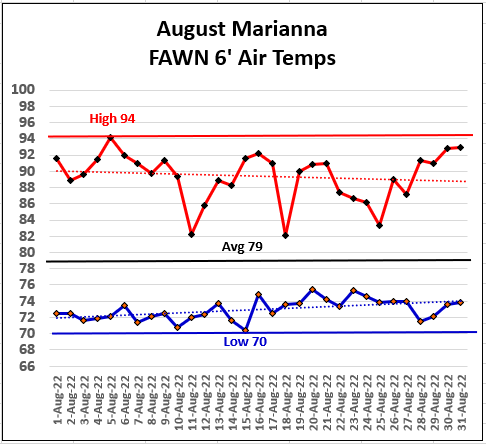 The Climate Prediction Center (CPC) said it would be warmer than normal in August.  It was only slightly warmer (0.6°) than average for the Panhandle.  At the Marianna station, the high of 94° came on August 5th, while the low of 70° was on the morning of August 15th.  The average for August 2022 was 79°.  You can see that all of those overcast and cloudy days kept high temperatures in the low 90s for much of the later part of the month.

Harvest season is upon us.  Early planted peanut fields are being dug to prepare for harvest.  There was even a tease of fall with nights falling into the upper 60s earlier in the week.

The Climate Prediction Center (CPC) outlook for September expects wetter than normal conditions to continue.  For the first time in months, part of the Panhandle is not expected to be warmer than normal.  We can hope that holds true, but the fact that their above average line cuts the Panhandle in half, makes me wonder what to expect.

The longer-termed October- December outlook was just released yesterday.  It shows the CPC is expecting La Niña to significantly affect the climate in the final three months of 2022.  Fall is when the Panhandle typically starts getting dryer, so this forecast shows warmer and dryer than normal climate to close out the year.  While this is not bad news for warm-season crop and hay harvest, it is much less favorable for cool-season forage and cover crop establishment.

For the past several months climate forecasters have been expecting La Niña  to conitue through the fall and winter.  At this point they are very confident La Niña will not end soon, so now the debate is when will it end.  The best guess at this point is we will get back to ENSO-Neutral some time this coming spring.

La Niña is present.  Equatorial sea surface temperatures (SSTs) are below average across most of the Pacific Ocean.  The tropical Pacific atmosphere is consistent with La Niña.  La Niña is favored to continue through Northern Hemisphere winter 2022–23, with a 91% chance in September–November, decreasing to a 54% chance in January–March 2023.  Climate Predication Center

Nothing in the current forecast looks bad for harvest season.  October and November may be warmer than normal, but soils will likely begin to dry out as frontal rains are pushed north of our area.  Of course this could all change with tropical storms, but it looks like we have good conditions for crop and hay harvest ahead.  A third round of La Niña is not ideal for cover crops and cool-season forage production.  We have seen two years of this already, so you have an idea what to expect, but every year is different.   Based on the La Niña expectations for fall and early winter and the current CPC Outlook, I would focus on planting winter grazing only in fields with good moisture holding capacity.  With high feed costs, winter grazing is still a good investment when planted in prepared fields, if there is adequate soil moisture for quick emergence.  Plant in October vs. November to utilize existing soil moisture. Irrigated fields would be the safest bet for cover crop and forage productivity. Overseeding permanent pastures with ryegrass is always risky, but even more so based on the current forecast  The La Niña may also play a factor in crops planting in early spring, such as watermelons, and field corn, but those decisions are still a ways off.