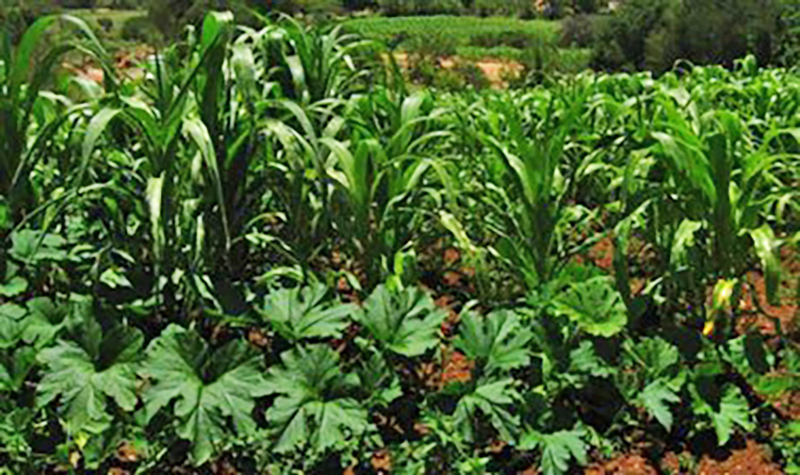 Diverse farming systems are a primary component of today’s regenerative agriculture movement, but the concept is far from new. Native Americans have planted more than one crop together for hundreds of years in a practice known as intercropping. “Intercropping is an all-encompassing term for growing two or more crops nearby: in the same row or bed or in rows or strips that are close enough for biological interaction. Intercropping is referred to the synergy in which the physical aspects of each plant complement and improve each other’s health and growth. Mixed cropping, companion planting, relay cropping, interseeding, overseeding, underseeding, smother cropping, planting polycultures, and using living mulch are all forms of intercropping” (Mohler, C,L. & Stoner, K.A. 2009). Intercropping can improve crop productivity, increase yields, and improve soil health. Intercropping can also help manage pests naturally, reducing weeds, insects, and diseases. 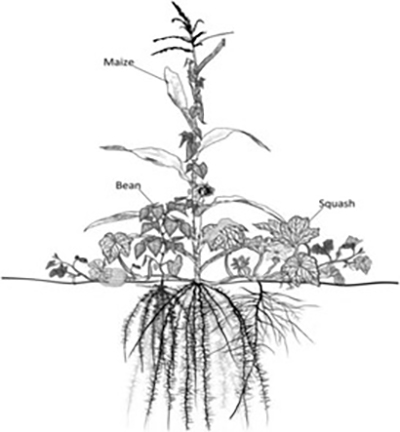 A combination of corn, beans, and squash known as the ‘Three Sisters’ was cultivated extensively by the Iroquois in the Northeastern U.S. In this system, the corn stalks provide natural support for the beans to grow on while the beans add nitrogen to the soil. At the same time, the squash vines act as a “living mulch” that maintains soil moisture and prevents weeds from growing. While this practice is often cited in current sources to improve small gardens for individual use, its historical value lies in larger-scale implementations designed to nurture and sustain entire communities. Studies on the ‘Three Sisters’ system in the Northeast have shown how polycultures are more efficient at using nutrients, light, and water than monocultures. Eames-Sheavly describes the benefits and processes behind interplanting within Three Sisters gardens. “Iroquois farmers adapted this ecological planting method to meet the needs of their crops and people. Interplanted crops are not as attractive to pests, while large plantings of one crop tend to have more pest problems (Eanes-Sheavly, M. 1993).”

The Three Sisters model was not just a means for modeling a specific intercropping practice but was, and is, a significant cultural and spiritual construct. Diohe’ko (Three Sisters), had been cultivated for at least five hundred years by the Seneca, an Iroquoian tribe inhabiting western New York State before European contact. The Three Sisters, corn, beans, and squash were planted together in hills in fields, cultivated and harvested by work parties of women. The Three Sisters was a crucial cultural complex. The Sisters are protagonists of several Seneca tales, myths, ceremonies, and legends.

If you’d like to mix a little history in with your farming/gardening, why not give the Three Sisters a try using Florida-Friendly varieties? Please get in touch with your county extension office for more questions about vegetable gardening or crops best suited to your area. If you would like to learn more about growing three sisters in Florida, please use the following publication links: