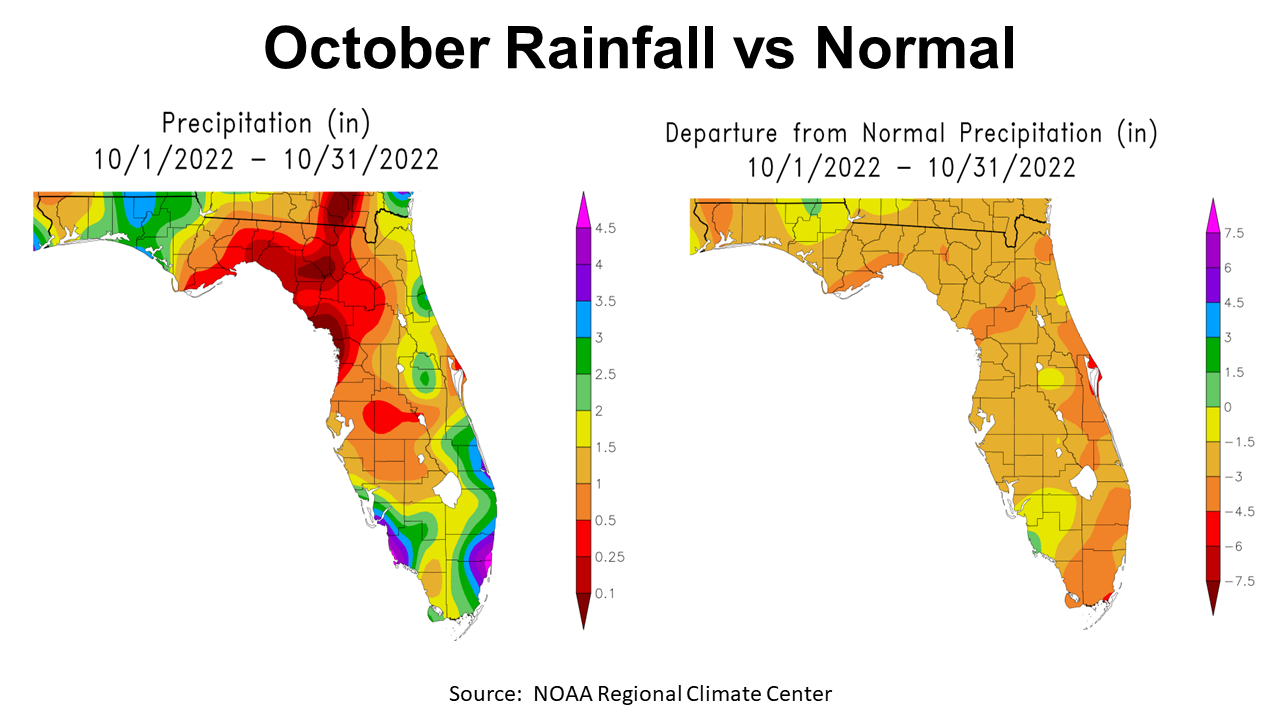 October was another dry month for the Florida Panhandle, with rainfall totals ranging from 1/4 to 3″. In the map to left above, you can see that there was a pocket  with over 3″ (blue), but there were much larger portions of the Panhandle with less than 1″ (orange and red).  The map to the right shows rainfall comparisons with historic average for October.  Only a very small area in green was above average, with the vast majority -1.5″ or more below normal.

The six Florida Automated Weather Network (FAWN) stations in the Panhandle show the variation in rainfall across the region in October.  The wettest location was in DeFuniak, where 2.7″ was recorded, which was -1″ below normal for the month.  The driest location was Monticello, where only 0.3″ was recorded, -3.4″ below average.  The average for all six stations was 1.3″, which was -2.1″ below normal.

Through the first 10 months of 2022, only the Quincy station with 54.6″ was above historic average for the year.  Contrast that with Monticello where only 45.3″ has been recorded thus far, which is 6″ below average  from January through October.  The yearly total through OCtober for all six stations averaged 48.6″, which is -2.2″ below normal. 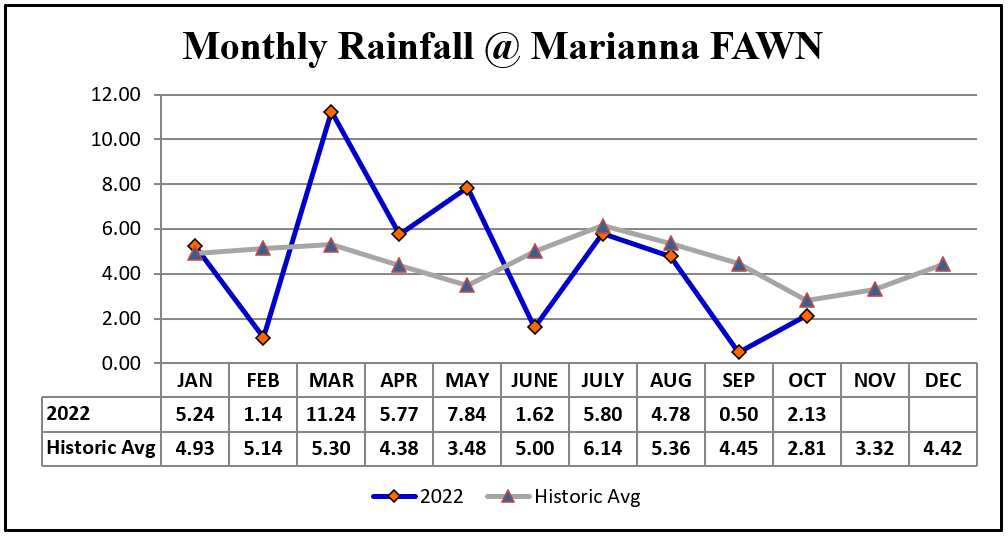 In the graph above you can see the actual rainfall measured in 2022 at the Marianna FAWN Station versus the historic average each month.  This graph really illustrates well how a year that started well above average began to dry out in the summer and through the fall of 2022.

Looking at the Florida Drought Monitor from the beginning of October to the end, you can see the combined effect of months with limited rainfall.  Most of the Panhandle was either in Moderate Drought (tan) or Severe Drought (gold) at month’s end. 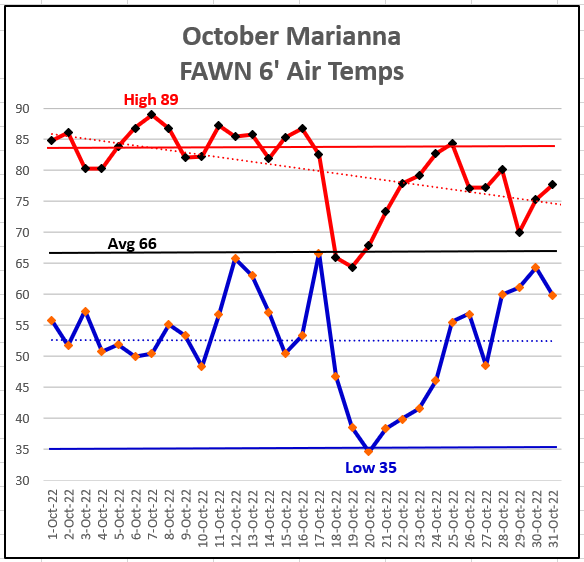 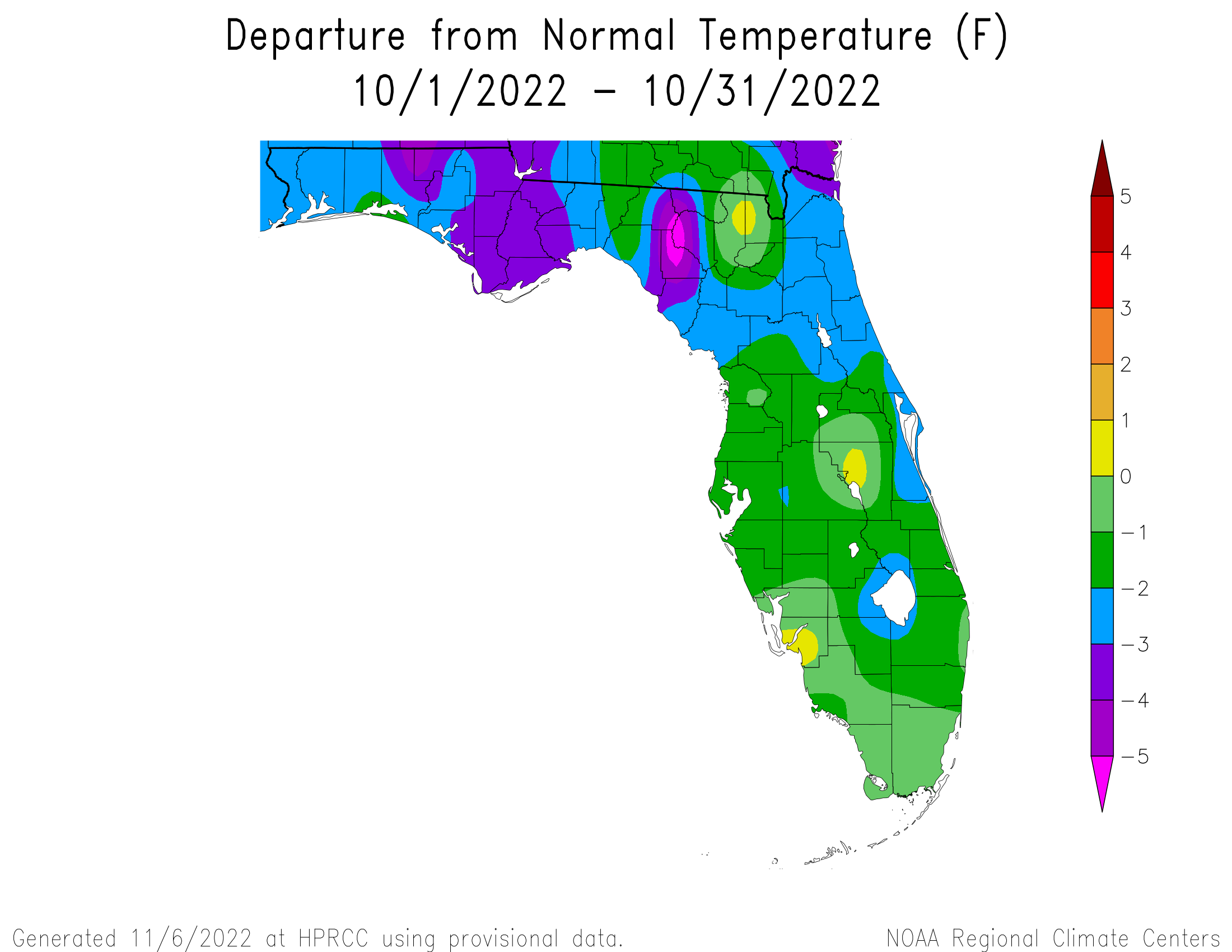 The map above shows October 2022 average temperatures compared to historic average.  Most of the Panhandle was -2° to -3° below normal for the month. 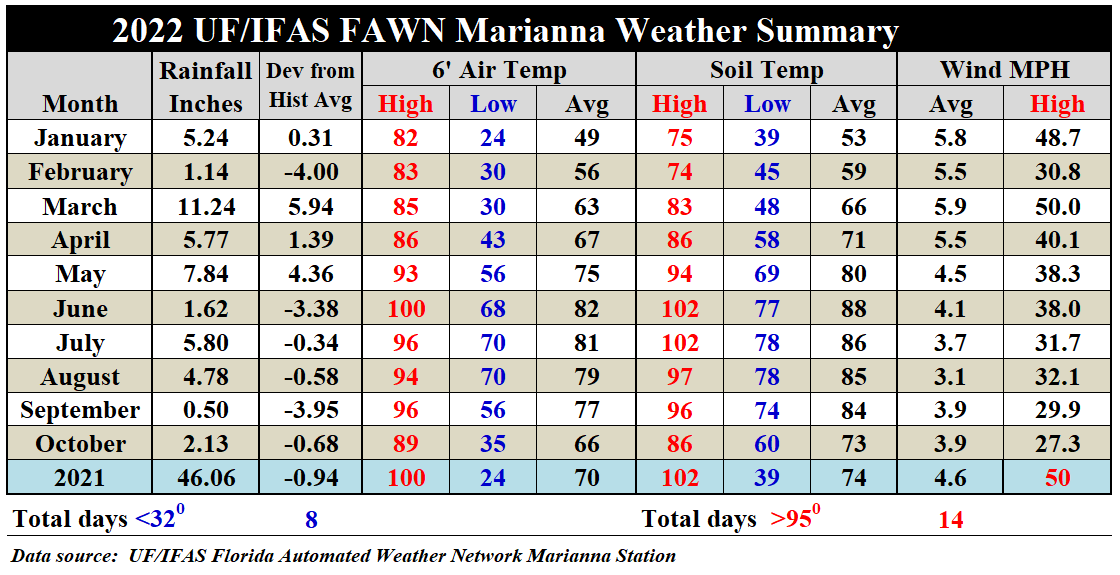 Looking at the monthly summaries from the Marianna FAWN Station you can see that the average 6′ air temperature dropped 11°, from 77° in September to 66° in October.  Likewise, the average soil temperature also dropped 11°, from 84° in September to 73° in October.  You can access the complete daily weather summary from the Marianna FAWN and the monthly rainfall data from the six Panhandle wether station by using the following link:

The Climate Predication Center (CPC) has stuck to there original forecast, based on La Niña this fall and winter.  They are expecting the warm and dry trend to continue in November.  We will see how much rainfall Tropical Storm Nicole provides, but it does not look like that the Panhandle will move out of the Drought Monitor anytime soon.

The CPC is expecting the winter months to also be warmer and drier than normal.  Again there is no idication the current trend will change in the near future. 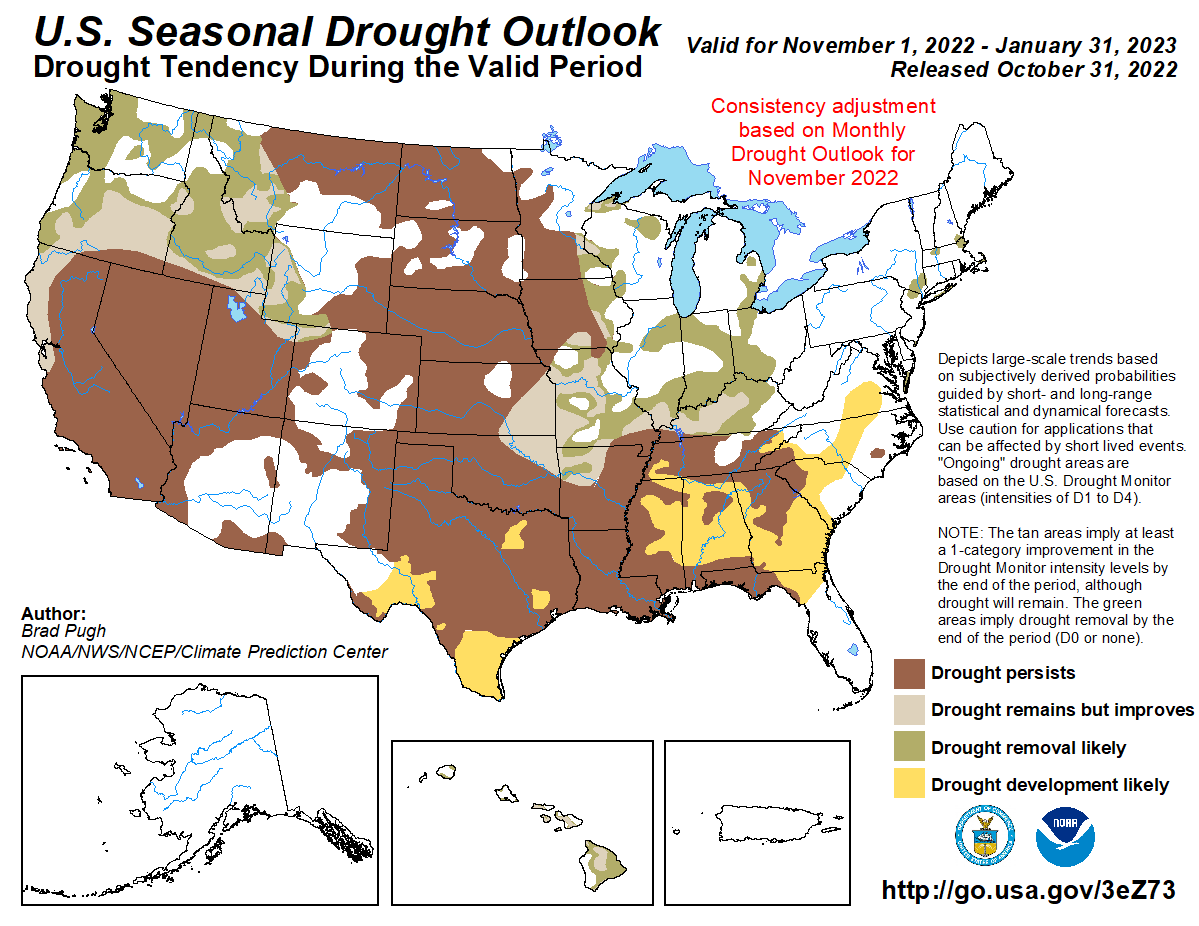 The entire Southeastern Region is expected to either persist or develop drought conditions through the end of January.  Be prepared for a dry winter.

The CPC is pretty certain that La Niña is going to persist through February, but there is hope for ENSO neutral in the spring.

Below-average sea surface temperatures (SSTs) strengthened in the east-central Pacific Ocean during the past month.  The most recent  forecast of the Niño-3.4 SST index indicates La Niña will persist into the Northern Hemisphere winter 2022-23, and then transition to ENSO-neutral in February-April 2023.  The forecaster consensus, which also considers the North American Multi-Model Ensemble (NMME), is in agreement with the timing of this transition.  The recent weakening of the trade winds suggest below-average SSTs may be near their minimum, though considerable uncertainty remains over how gradually the anomalies will decay.  There is a 76% chance of La Niña during the Northern Hemisphere winter (December-February) 2022-23, with a transition to ENSO-neutral favored in February-April 2023 (57% chance).  Climate Prediction Center

So what does this mean for farmers and ranchers in the Panhandle?

Tropical Storm Nicole will bring some level of temporary drought relief to North Florida, but we can expect a warmer and drier than normal winter to follow.  This is the general trend, so that does not mean there won’t be cold snaps, or some fronts that bring rainfall to the region.  However, we have already seen how La Niña breaks up fronts as they pass over the Gulf Coast Region.  If you have not yet planted winter forages or cover crops, I would suggest taking advantage of moisture from the Tropical Storm.  This may be the most ample moisture that you will have to work with for a while.  This looks like a year when irrigation will be a significant advantage for small grain production.  There will be risk in growing anything on dryland (non-irrigated fields).  Choose the fields you invest in wisely.