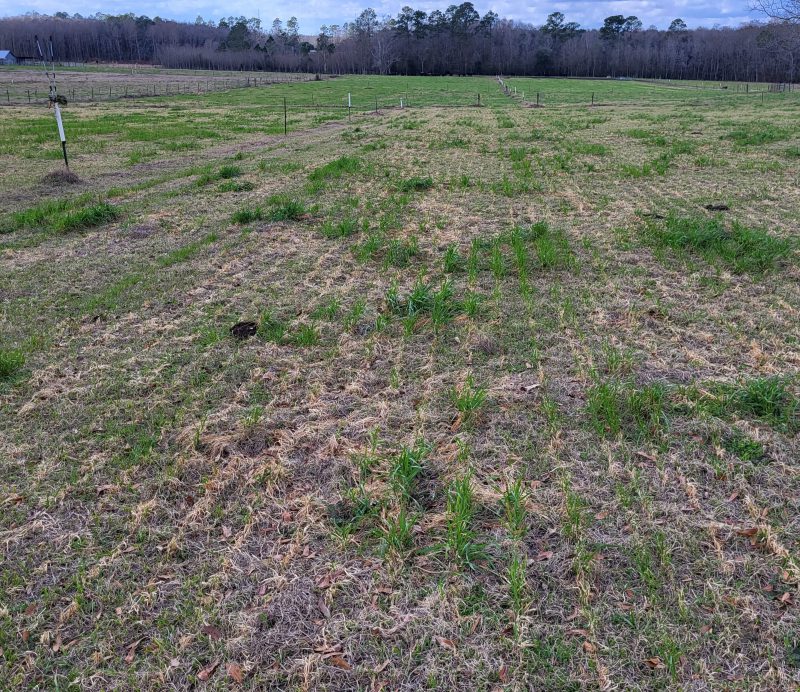 A field of oats and ryegrass approximately 2.5 weeks after the Christmas freeze. Ryegrass is the only surviving forage in the paddocks in the foreground. All of the oats appear to be completely dead. This paddock was grazed prior to the freeze event. In this and other locations it appears that grazing prior to the  freeze may have increased injury and plant mortality but at his point the phenomenon is not fully understood or documented. Photo Credit: Mark Mauldin

Cool-season annual forages are widely used in North Florida grazing systems. Florida’s mild winter temperatures are one of the reasons these forages are generally successful. However, an unusually strong cold front dropped temperatures abruptly for multiple days during the week of Christmas. The cold snap brought lows in the teens for consecutive nights and days where the temperature barely climbed above freezing. These unusually cold temperatures threw many “thin-blooded” Floridians and our unwinterized farms for a loop. Our cool-season forages were no exception – they were definitely impacted. Since the Christmas cold snap, we have gotten many calls from producers inquiring about what they are seeing in their fields and how to best manage cold damaged forages going forward, specifically grazing and/or replanting options.

Put simply, forages are damaged by prolonged subfreezing temperatures because the individual plant cells can burst when the water in them changes from liquid to ice (think about unprotected pipes). Variations in plant physiology and cell morphology dictate how readily and rapidly this process can happen or, in other words, how cold tolerant the plant is. It is known that there are considerable differences in cold tolerance among our recommended cool-season forages. There are variations between species and between varieties/cultivars within the same species. All recommended species/varieties can handle some freezing temperatures but the prolonged periods well below freezing that we saw around Christmas made the variation in cold tolerance very evident.

Focusing on grasses of the recommended species, cereal rye is the most cold-tolerant and oat is the least tolerant, with ryegrass and the other small grains being somewhere between.  As previously mentioned, there are marked differences between cultivars. As expected, the worst injury we’ve seen has been on oats with more sporadic injury to ryegrass and the other small grains. The pictures and video below show more specifics regarding species/variety effect on cold damage susceptibility. Note: The black oats shown below are a different species (Avena strigosa Schreb) than the recommended varieties (Avena sativa) and it was known that they would be quite susceptible to freeze damage. (Figure 2).

Figure 2. Difference in cold tolerance of multiple oat cultivars in two locations, 15 miles apart, and planted in two consecutive days. Horizon 306 seems to have tolerated the cold weather better, but the difference was less apparent in the southern (bottom) location. Two experimental lines of black oat were being tested and had severe injury in both locations.  Photo Credit: Marcelo Wallau

Beyond species and variety, there are many field-level factors that could influence the extent to which plants were injured and there potential for survival. Perhaps the most significant field-level factor is growth stage. Plants well into the tillering phase are the most resilient. Their growth points are low and protected. Additionally, plants at this stage are readily expanding leaf area facilitating recovery. Very young plants (< 4 to 6 inches) are more prone to severe injury and death due to prolonged freezing temperatures. Their leaves are small and tender which increases the extent of the damage in proportion to the size of the plant. This combined with their growth points having little to no canopy protection creates a dire situation for young plants. After booting, when plant start the reproductive phase, their ability to grow out of freeze damage is greatly diminished as they are essentially done with vegetative growth. Additionally, during this time their growth points are moving up in the plant, becoming less protected, causing forage grasses being grown for seed to be at risk of yield loss when cold damage occurs after boot stage.

Acclimation, or the lack thereof, is another factor that can impact the severity of cold damage. In this year’s scenario we faced a sudden drop in temperatures. We went from a relatively warm week directly into a very cold spell for multiple days. If we had a week of cool (above freezing) temperatures prior to the cold snap, plants would have acclimated and would have withstood the freezing temperatures better. As plants are exposed to cold weather prior to freezing temperatures, they make changes to membranes and secrete proteins and other components such as sugars to protect against freezing. A similar effect can happen with drought stress just prior to cold weather. Dry conditions cause plants to harden off, resulting in reduced freeze injury. Unfortunately, we had drought conditions in the fall when we should have been planting making the situation worse (with younger/smaller plants at the time of the freeze) rather than better.

Can/should it be grazed?

This was probably the most common and pressing question immediately after the cold snap and like so many other questions relating to forage management the answer was “it depends”. It depends largely on the how severe the injury is and if the forage was otherwise ready to graze. Understanding that grazing decisions specifically relating to the Christmas cold snap have already been made, hopefully the following comments can be helpful after future hard freezes. If there is going to be cold damage it will begin to show up a few days after the freeze as chlorosis (leaf whitening) which will quickly transition into necrosis (leaf death),. In these situations, if extensive damage becomes evident, we recommend grazing off the forage to get some utilization prior to complete leaf death (like the top part of Figure 2). If the growing point was not killed, this will clean up the dying material and help stimulate regrowth. If the growing point was killed, there will be no regrowth. In situations where the injury is minimal (just the tips), and the pasture is not yet ready for grazing, it is advisable to wait and allow the plants to continue to grow until they reach recommended grazing height. 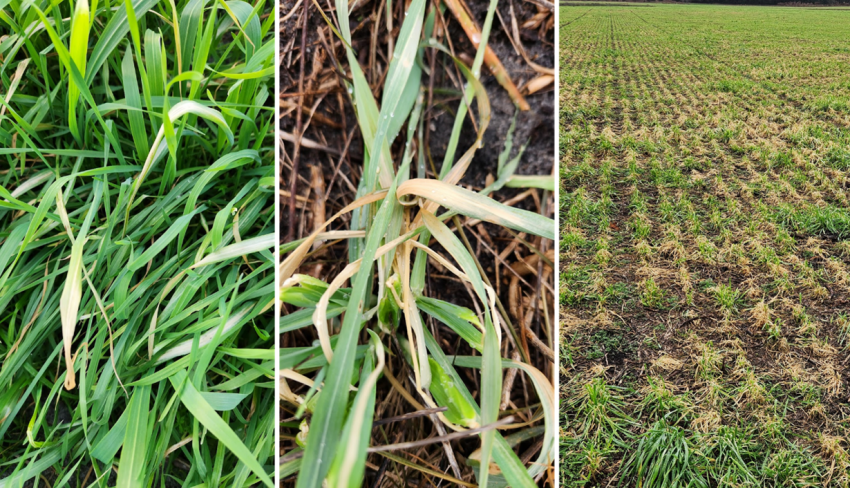 Initial chlorosis and burning of leaf tips (left), followed by necrosis (yellowing; center) and partial loss of field (right) of an oat crop following frost. Although the pictures are not sequential, they illustrate the potential progression of cold damage.
Photo Credit: Marcelo Wallau

Nitrate accumulation can be a concern following a stressful period (cold, drought, etc.), but only if there has been a nitrogen application immediately prior to the stress, with time for plants to have absorbed the nitrogen but not processed it. In general, nitrates are not an issue based on the rates of nitrogen fertilizer we typically apply in grazing situations. That said, it could be an issue in high fertility or highly fertilized fields. If in doubt, it is best to send a forage sample to an analytical lab that can test for nitrates. Check with your local extension agent for sampling procedures and for options of labs that can do this testing.

If the decision is made to graze off forages after a damaging freeze (assuming the growth points were not killed, and regrowth is expected) be especially mindful of the recommended minimum grazing height. The plants have already been injured by the freeze they do not need to have to deal with overgrazing also. Although we want to clean off the injured leaves, there needs to be leaf area left to allow for photosynthesis needed to drive regrowth. This is especially true for young plants that are not fully established.

Is it worth replanting?

Chances are it will be the third week in January (or later) before you read this… Re-planting that late is a shaky proposition at best. Chances are some of your forages should survive. You’re probably better off to manage them as best you can rather than replant. Regarding replanting, obviously there is considerable cost associated and the grazing days provided will be much fewer than with a “normal” fall planting. If you start looking for seed (good luck finding much) and making preparations now, it will be February before the new seedlings emerge and mid-March before you can graze. The economics of that timeline are not encouraging. The situation is even worse for overseeded bahia/bermudagrass pastures or grazed cover crops where the perennial grass breaking dormancy or the planting of the cash crop bring the grazing of cool-seasons forages to an abrupt end in the spring.

Be advised that if you do decide to replant, fast growing varieties, such as 401 rye, or perhaps Legend 567 oat, will get you biomass the fastest, but be aware that with all varieties photoperiod or temperature will reach a point where it induces plants to flower. With extremely late planting dates that can happen before the canopy is completely closed. Small grains are “long-day” plants, meaning they will enter reproductive phase as days grow longer in the spring, or as the sum of temperatures reaches a threshold. The specific photoperiod or temperature threshold needed to induce flowering is quite variable depending on the variety. The risk of earlier-than-desired flowering would be lessened using ryegrass, but peak or production will be delayed until April into May with such late planting.

The importance of forage mixes

Mixing forages of different growth habits, growing characteristics (e.g., early and late season), functional groups (e.g., legumes and grasses) and stress tolerances is a recommended practice to increase the length of the grazing season and improving the resiliency of the sward against pests, diseases and environmental challenges. The Christmas cold snap was one of those situations where a mixture that included rye or triticale would have been much more resilient than a monoculture of oats or even oats and ryegrass. Had the oats been killed by the freeze the rye and/or triticale would have had more room to tiller and could have compensated to some extent, avoiding the complete loss of the pasture. In addition to the more cold-tolerant grasses, some of the legumes we planted (vetch and winter peas) also showed no signs of damage (watch the video).

Although quite unusual, such extreme cold events are forecasted to be more frequent and intense in the future. Understanding what is happening and the actions that can be taken to, first, prevent, and second, mitigate the damage can help livestock producers to improve resilience and minimize losses in grazing systems. By the time most people are reading this article, it will be too late to act on the damages from the Christmas freeze, but we hope this information can help producers fine-tuning decisions on planting and grazing in the future. For more information on recommendations for cool-season forage management, please reach out to your local extension agents, or contact us at forages@IFAS.ufl.edu. 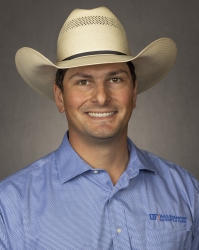