For decades, humans have relied on dogs to detect explosives, illegal drugs, lost people and wildlife. More recently, they have been used to detect pests such as termites, bedbugs and agricultural insect pests. Now, we can add agricultural diseases to the list.

Huanglongbing (HLB) or citrus greening is the major disease limiting citrus production in Florida, and is responsible for the 75% decline in Florida’s $9 billion citrus industry. The disease is caused by the bacterium, Candidatus Liberibacter asiaticus and is spread primarily by the Asian citrus psyllid, although it can also be transmitted through infected plant tissue.

Once a tree becomes infected with HLB, there is no cure, and visual symptoms of the disease after infection may take months, even years to appear. During that time, the disease can spread rapidly, destroying existing groves. Early detection and the removal of infected trees is the most effective method to prevent an HLB epidemic. At present, the most common method for diagnosing HLB is visual inspection through scouting; however, once the disease is observed, it is likely too late. Scientists with the United State Department of Agriculture (USDA) Agricultural Research Service (ARS) have been evaluating the use of scent-detecting dogs for the early detection of HLB infected trees and their method is proving to be successful.

The mulit-year study has been funded by a grant from the USDA Animal and Plant Health Inspection Service (APHIS) HLB Multi-Agency Coordination (MAC) program, and a partnership between F1K9 Kennels. Through the F1K9 training academy located in Florida, twenty dogs have been trained to recognize the volatile compounds emitted from trees infected with HLB. In the field, the dogs run with their handler along the grove row, sniff each individual tree and alert on trees infected with HLB. After alerting to an infected tree, dogs are rewarded by verbal praise and short playtime with their handlers.

Data from studies show that the dogs have a 99% detection accuracy rate, and when two or more dogs alert to the same tree, the tree has a 100% probability of infection. Additionally, the dogs were able to detect trees inoculated with HLB within 2-3 weeks after inoculation. The same trees were sampled using polymerase chain reaction (PCR) testing (the standard HLB detection method) and did not test positive for HLB until three to six months after inoculation, confirming that the scent-detecting dogs are a useful tool for early detection of HLB.

In the Florida Panhandle, confirmed cases of citrus greening or HLB and established psyllid populations have been geographically isolated, with the majority being in residential citrus plantings and not commercial groves. Therefore, an early detection method like this, paired with a rapid removal of HLB-infected trees may be a useful tool to help minimize disease spread and optimize planting longevity for newly planted acreage in North Florida and South Georgia where HLB incidence is low. 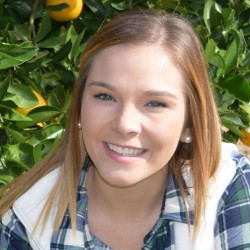