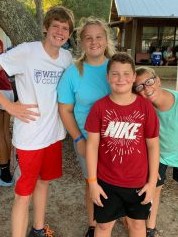 Dartanion worked to make camp fun for everyone.

When I think of Dartanion Hope, I have to smile. His is a life story riddled with challenges, the kind you read about in books or watch on TV docudramas. But he doesn’t focus on the negatives. He’s a happy kid with an infectious positive outlook on life and something of a mischievous nature. If I were to describe him in single words, I’d use ones like helpful, kind, thoughtful, independent, unassuming, nonjudgmental, and amazing – in the truest sense of the word.

Even with a bright future and military career ahead of him, Dartanion, or Dart, as we call him in the 4-H world, is in fact, a true success already. He would thank his mom, but I try to remind him that she can’t make his choices for him. He has chosen and continues to choose to be the person he’s become. I think his mom would agree.

If I’m being honest, it’s hard to measure how much 4-H has meant in determining the person Dart has become. A little? A lot? It’s tough to say, because he’s a measure of so many great experiences and opportunities – track, cross country, church, you get the idea. But 4-H certainly has been a place where we’ve seen the manifestations of a natural leader come into play. I’m definitely going to tell people he’s one of my 4-H’ers, like a proud mama would claim her own son, whenever I get the chance. 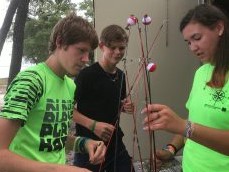 Dart works with others at camp to help untangle fishing gear prior to a sports fishing class.

Dart started coming to 4-H day camps when he was young. Eventually I got him to Camp Timpoochee for county camp week. He was a rambunctious tyke with unbelievable stories like having to be extracted from a fork in a tree by the local volunteer fire department using the jaws of life. He’d become so tightly wedged into the gap, he couldn’t get out otherwise. Or the time his front teeth were knocked out when his older brother practiced a wrestling move on him and didn’t realize he’d accidentally rendered him unconscious and dropped him face first into the floor. These stories, which were frightening to a young 4-H agent, I later found out from his parents, attending firemen, and physicians, were not tall tales, but were indeed ALL true. I probably should have been more scared to take Dart so far from home for a whole week, but we made it!  And he came back again and again until he became a camp counselor, the best counselor I could have asked for.

Dart as a Senior Counselor at Camp Timpoochee

You see, during Dart’s first year as a Camp Counselor, I had just lost one of the most respected and dependable male camp counselors in Calhoun County 4-H due to graduation.  As summer camp approached, I was a little worried how my crop of ALL first-year counselors would pull it off without his leadership. But Dart rose to the challenge. It was one of those rare and gratitude rendering experiences, when a person truly turns on their responsibility gene and shocks you with their maturity and poise. He was such an impressive counselor that he was invited back to state open enrollment camps as a counselor. This is an invite only gig. You have to impress camp staff and the resident director during your county camp week to get the ask, and he got it more than once. He totally deserved it. He was conscientious, fun, and made sure all of his campers were included. He became one of my most requested counselors by campers and parents, and they were sad to see him receive his senior counselor grommet last year.

It wasn’t his last trip to Timpoochee though. Thankfully, his busy schedule worked out so that he could join the NW District Teen Retreat Planning team with three of his camp counselor friends. Not only was he on planning calls with other district teens, but he spent extra hours planning and leading two different workshops for attendees with his county peers. He volunteered the group to stay late after meetings to help me double check plans and make decisions.  They made extra trips to the office to help me pack and load equipment. And on that weekend, they did A LOT of running for me to help make sure things went well. He wasn’t the only super star of the weekend by any means. That entire planning committee was chock full of them. But once again, he was a standout leader. I was proud of him and hugely grateful for this last chance to shine with 4-H before his graduation. 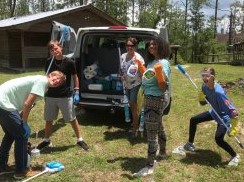 I’ve been very blessed in my career to be impressed by a lot of young people. And today is no exception. I want Dart to get the praises he so deserves.  Dart deserves to hear again that I am proud of him; that Calhoun County 4-H is proud of him; that he has lifelong friends in 4-H regardless of where life takes him; that we wish him all the best; and truly, that he is a prime example of how 4-H takes the best and makes them better. Congratulations Dart! We absolutely wish you the best of luck!

To find out more information about 4-H programs that can offer essential life skills such as independence, organizational skills, and goal setting, to your children or to volunteer with 4-H, please contact your local UF IFAS County Extension Office, or visit http://florida4h.org. 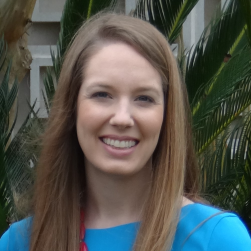