Carinata: A Crop with Potential for Florida’s Farmers 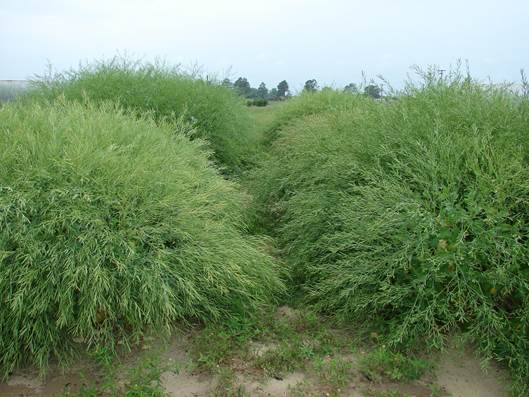 Field preparations at the UF/IFAS North Florida Research and Education Center (NFREC) in Quincy Florida are currently underway for a crop trial offering great value potential for Florida Panhandle farmers, and potential economic and environmental benefits for everyone else.

Brassica carinata, or carinata as it is commonly called, is a leafy plant originating in Ethiopia. In its native habitat it is cultivated for its mild flavored leaves, but this crop is also a prolific producer of oil seeds.

Like its botanical cousin canola (Brassica napus), the oil from this temperate-region plant holds the keys to value in the modern world. In the case of carinata, it is the basis for alternative fuels which are virtually indistinguishable from their petroleum counterparts.

“By commencing production with our agricultural innovators and early adopters, we will be able to bring 200,000 to 500,000 acres of row crop/pasture land in Florida under oilseed production during the winter months,” said Dr. David Wright, project director at NRFEC. “This is normally a fallow period of acreage underutilization, which could produce approximately 40 to 100 million gallons of biofuel,” he said.

Jet fuel produced with carinata is capable of being formulated as a 100 percent bio-fuel meeting petroleum standards using technology from Applied Research Associates in Panama City, Florida. Until now bio-fuel flights have been restricted to a 50 percent blend with petroleum, as the technology for a pure bio-fuel product was largely unproven.

On October 29, 2012 a Dassault Falcon 20 twin engine jet took off from Ottawa, making a 90 minute round-trip flight to Montreal. The fuel which powered the jet was made from 100 percent carinata oilseed.

A chase plane monitored the air quality of the exhaust from the Falcon 20’s engines, and several engineers were on-board to monitor the engine’s performance. It was the first time a jet aircraft was powered by an unblended, renewable fuel meeting petroleum jet fuel specifications.

An additional feature of carinata fuels is they need a minimal amount of refining once the oilseed are crushed and filtered. A million dollar grant from the Florida Department of Agriculture and Consumer Services will help refine production practices, post-harvest handling and oilseed delivery procedures.

“With the technology proven we estimate total income is expected to be from $550 to $750 per acre, generating an income of $110 to $375 million per year for the state of Florida,” said Wright. “This technology will not take land out of food production and has the benefit of creating jobs in Florida with a minimal impact on the environment,” he said.